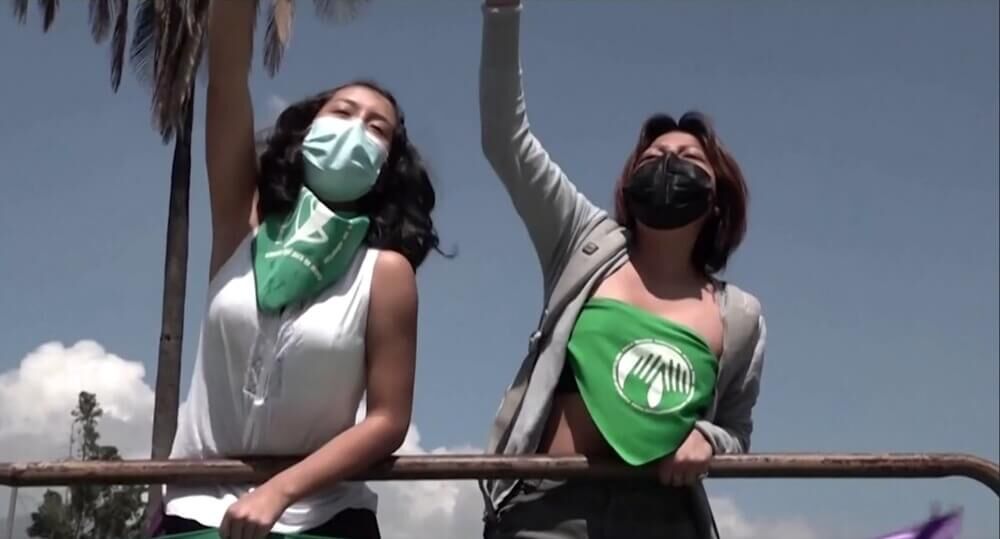 A green bandana is the new symbol of hope for the disconcerted Americans who are outraged about the overturn of Roe v. Wade. This trend stems from Latin America. The Green Wave movement originated in Argentina in 2003 and made its way to the United States after our abortion rights were targeted and stripped from us. People in major metropolitan cities across the U.S., like New York, Washington, and L.A., sported green bananas and t-shirts at recent protests. According to Le Monde, the color was adopted by abortion rights activists in Colombia and Venezuela because it represents hope, health, and life.  Lawyers and activists in places like Colombia and Mexico have been fighting for abortion rights with unrelenting hope, tenacity and grit for decades. Recent victories in Colombia and Mexico, where criminalizing abortion in some states was deemed unconstitutional in 2021, show that the U.S. can learn from Latinx leaders and implement some of the strategies that are used in their fight for justice. Here are six strategies to consider.

Make the subject of reproductive rights a part of your everyday repertoire. We must arm ourselves with information that we can provide to the public and to our friends over breakfast/lunch/dinner conversations. You can find online guides and resources about accessing clinics and workshops, then spread the news. At the end of the day ask your loved ones and neighbors, what does abortion access look like in your home state and what can you do to elect more feminists into office? Look at the decades-long efforts by Giselle Carino, an Argentinian political scientist who represents the Fos Feminista alliance as the New York CEO. The organization provides healthcare resources, access to sex education, and advocates for survivors of abuse. They provide STI screenings, and offer contraceptive services and treatment. The organization expands help to rural and indigenous places like rural Oaxaca by providing community sex education, and offering Telehealth trainings to providers in hopes that this information will reach migrants who are traveling across dangerous routes. Follow their example and gear up for resistance by taking your frustration to the streets!

2. Remember, this fight is a collective one.

Only in solidarity will we be able to move forward. The U.S. can follow Latin America’s example of merging coalitions. In 2022, the World Politics Review pointed out that multiple organizations in Argentina “from NGOs and grassroots collectives to popular organizations and professional associations” joined forces in support of abortion rights. CIS women, trans men, gender non-comforming people, and potential fathers, regardless of their race, ethnicity, and economic status, need to unite on this issue. Argentine activists reveal that in order to strengthen the case for abortion rights there must be a collaboration among multiple people in different sectors.  Now, more than ever, we must raise awareness and link arms in this battle for human rights.

3. Be patient and intentional.

Paula Avila-Guillen is a Human Rights attorney who fought to decriminalize abortions in Colombia for at least 15 years. Her persistent efforts eventually aided in the country’s 2022 decision to legalize abortions for people up to 24 weeks of gestation. It was a long battle, and from this example we must understand that the U.S. Supreme Court decision can take decades to reverse. As Avila-Guillen stated in NBC news,“It’s a marathon, not a sprint.” In the years ahead, we must protect our most vulnerable, such as marginalized black and brown people who have minimal access to abortions. We can learn from the Colombian civil rights movement Causa Justa's (Just Cause) example of aligning abortion rights and human rights. In the Colombian lawsuit, the Causa Justa made an argument for migrant women, stating that these individuals “face additional barriers to reproductive healthcare access because of their irregular migratory status, and [are at a] higher risk of being victims of human trafficking and other forms of sexual violence.” This is also the case in the United States, where female farmworkers are ten times more likely to be sexually assaulted, according to journalist Paola Ramos. In her book, Finding Latinx, she highlights research from the Southern Poverty Law Center (SPLC) that points out that “abusers – whether supervisors or male farmworkers – deliberately take advantage of their victims’ undocumented status, knowing that they are unlikely to report the abuse for fear of deportation or losing their job.” It’s important to reflect on this when you chant “abortion rights are human rights.” Ramos’ book, a collection of Latinx stories from across the nation, reminds us to celebrate and protect the people who make up the backbone of this country.

4. Don’t underestimate the power of a good slogan.

Let’s bring back Chile’s slogan that shook the world in 2020—“El violador eres tú!” (The rapist is you!).  These women danced, chanted, and poured passion and anger on the streets in an effort to confront sexual violence against women. This energy eventually powered the abortion rights campaign as women in Paris, London, New York and various parts of Latin America copied the rhythmic chant and moves. Americans can learn from Chilean feminists and apply these methods in our country because performative protesting is one way to evoke urgency. We must continue to generate catchy slogans and movements that will shake up our oppressors.

In June 2022, an American far-right extremist encouraged his 44,000 followers on Telegram to gather weapons, protect their local churches, and “defend the faith,” in response to abortion rulings as reported in the Washington Post. This call to action by “pro-life” leaders is just one example of how religion has played a role in dismantling Roe v. Wade. Religion has often been used to support draconian laws. However, Católicas por el Derecho a Decidir (Catholics for Choice) in Colombia played an important part in educating pious voters on reproductive health and dismantling the stigmas associated with abortion by sanctioning the use of contraceptives. This influence is a big deal in a region where 90 percent of the population is Catholic. In the United States, religion also seems to be a key player in determining how people feel about abortion legislation. In fact, the Public Religion Research Institute revealed that 70 percent of Americans identify as Christian and 59 pecent of them did not support the overturn of Roe v. Wade. In order to effect change we need to get everybody on board. This includes religious organizations that uphold progressive values. For those of us who are not religious, we must remember that we can use all the allies we can get.

In this regressive period in history, it’s time to fortify alliances with and learn from people outside of the U.S. because, frankly, we can use all the help we can get. The fear of being criminalized weighs heavy on those seeking help. This was why Latin American feminists formulated hotlines where people could find information to avoid unsafe abortions. In the United States, the National Abortion Federation (NAF) has a hotline (1-800-772-9100) where callers can access information about abortion access, cost coverage, and confidential consultations.

In Mexico, individuals requiring abortions rely on Mexican acompañantes who are educated and trained feminist activists who provide resources related to medical abortions, typically with the use of misoprostol. Their roles shift depending on where they’re located and the assistance that is needed. Some of the work they do can be compared the abortion doula’s role in America. In Latin America, these interactions are trust-based and free of charge. A clandestine arrangement is made sometimes using coded messages via social media. In the U.S., the danger lies in leaving digital evidence, as people’s text messages, fertility apps, and google search history can be used against them in a prosecution. The goal of an acompañante is to help people avoid criminalization if they choose a holistic abortion approach. As expressed in Feminist Review, “They can be characterised as grassroots, autonomous and largely informal initiatives of young women operating outside of the law, with little or no institutional support. They provide information, access to medication and accompaniment that is based on the conviction that pregnant people should have safe options to induce abortions autonomously.”

These are desperate times for individuals seeking abortions. In dark corners of America, people will struggle to find alternative methods to terminate pregnancies. The Supreme Court’s decision will result in a bloody and legal mess for many physicians and clients, especially communities of color. Mobilize, strategize, unite in green bandanas. The Green Wave has arrived and it’s only going to get stronger.

Tags: green wave , protests , human rights , Latin America , abortion rights , reproductive justice , digital evidence , doulas , Catholics for Choice , mobilization
Support Feminist Media!
During these troubling political times, independent feminist media is more vital than ever. If our bold, uncensored reporting on women’s issues is important to you, please consider making a donation of $5, $25, $50, or whatever you can afford, to protect and sustain BUST.com.
Thanks so much—we can’t spell BUST without U.