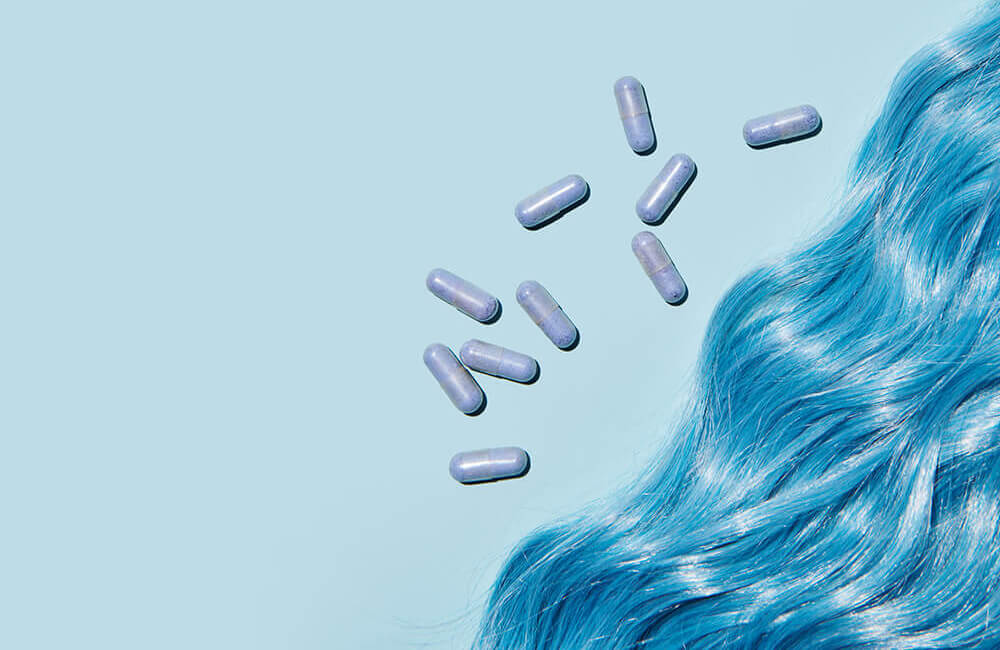 SINCE THE MID-20TH century, the derogatory phrase “blue rinse” has been used to describe a “matronly” white woman, sometimes of the type who clutches her pearls when faced with the shock of the new, be it miniskirts or gay marriage. Given that these are not the people one would associate with crazy-colored hair, what’s behind this ageist, sexist slur?

Blue hair has been around longer than you might think. Fashion designer Lucile had her models wear wigs dyed in shades of red, green, and blue during a 1913 show. “Until one sees it, one has no idea how very chic blue hair can be” cooed Vogue that December. “If only people understood the art of colored hair there could be no opposition to it,” London hairdresser Monsieur Vasco told a reporter in early 1914. “The exquisite beauty of a well-dressed head of pale, pale purple is something new in life.”

A Parisian hairdresser known as Monsieur Antoine claimed to have originated the look for natural hair in the 1920s. How could he make a big splash on an upcoming trip to the French Riviera, when his blue convertible was sparkling but his Russian wolfhound’s coat was lackluster? A pharmacist told him to add a few drops of bluing (a laundry solution used to brighten dingy whites) to the rinse water the next time he bathed the dog. This was basic color theory in action. Blue and purple sit opposite yellow on the color wheel; the complementary tones cancel each other out. In fact, gray-haired and white-haired women already knew that adding a drop of bluing or indigo to a shampoo’s final rinse “whitens the hair just as it would white goods, but too much gives it an unnatural tint,” warned the Chicago Tribune in 1910.

“Unnatural” was exactly what Antoine was going for. “I am a generous man,” he told The New York Times in 1958. “So, I added 150 drops of bluing. The dog emerged a nice shade of purple-blue. He was the hit of the season at Deauville.” White-haired American socialite Lady Mendl was so taken with the pup’s colorful coat (or, Antoine suggested, so jealous of the attention it received) that she demanded he tint her mane to match.

Most women just wanted to brighten up their hair color, not change it altogether. Commercially made blue rinses became available in the 1930s. One was supposed to choose the appropriate tint based on hair color (iron gray, silver, white, etc.), but it was still easy to overdo it. “The solution was too strong. The blue stayed,” explained a woman whose appearance on a Chapel Hill, NC, street generated a 1933 news story.

Ultimately, the sheer ubiquity of blue-rinsed hair on older women seems to have given rise to the slur. A 1970 Vogue article on New York City taxi drivers described a particularly misogynistic hack who aimed for puddles to splash women pedestrians, including “a passing blue rinse.”

Today, a mature woman can choose a bold blue dye because it suits her personality. But unfortunately, if you type “blue rinse” into your search engine, “old lady” remains one of the top results.

Tags: Blue rinse , Blue-colored hair , slurs , Colored Hair , Monsieur Vasco , Blue-haired old ladies , Lucile , Monsieur Antoine , Vogue , sexism
Support Feminist Media!
During these troubling political times, independent feminist media is more vital than ever. If our bold, uncensored reporting on women’s issues is important to you, please consider making a donation of $5, $25, $50, or whatever you can afford, to protect and sustain BUST.com.
Thanks so much—we can’t spell BUST without U.