"You Are Worthy," Senator Cory Booker's Emotional Speech Defending Ketanji Brown Jackson Reminds Us How Significant This Historic Moment Is For Black Women (And Has Us Reaching For The Tissue Box) 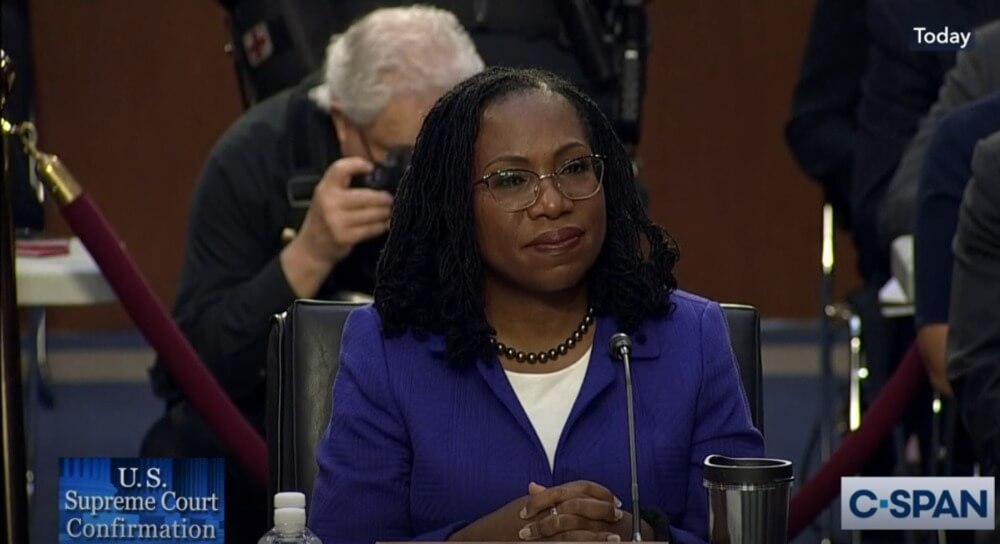 On Wednesday, Senator Cory Booker gave an impassioned speech for Judge Ketanji Brown Jackson during the Senate Judiciary Committee hearing that brought tears to the courtroom—and my living room. After two days and 20 hours of aggressive (and asinine) questioning from the GOP, Booker defended how Judge Ketanji Brown Jackson earned her spot as the first Black woman to be nominated to the supreme court, and highlighted how meaningful this moment in history is.

The final day of the grueling confirmation hearings for Judge Jackson concluded Thursday. Throughout the hearings, the supremely qualified Judge Jackson had to repeatedly defend her record and her character, and withstand microaggressions and bizarre lines of questioning from Senate Republicans that seemed to be more about the GOP’s political agenda than her abilities as a judge.

When it finally came time for Senator Booker to speak, he took it as an opportunity to refocus the hearing on the significance of this historic moment. Rather than begin with a question, Senator Booker asked Judge Jackson to “sit back for a second” because he had a “number of things” he wanted to say.

“You have sat with grit and grace.”

He commended how Judge Jackson has dealt with the GOP’s series of attacks in the hearing. “That’s why you are a judge and I am politician, because you have sat with grit and grace, and have shown us just extraordinary demeanor during the times when people were saying things to you that are actually out of the norm,” Senator Booker said.

Judge Jackson displaying her “extraordinary demeanor” shows not just her abilities as a judge—lest we forget, Brett Kavanaugh is a judge, too, and he defo isn’t the poster boy of grace—but the unrelenting pressure put on Black women to be infallible and remain cool, calm, and collected while under attack.

“It was maddening to watch, and yet I know that Jackson cannot express her frustrations outwardly,” author Mikki Kendall wrote in an article on time.com. “She’s going to be expected to eat this indignity with a smile and never speak of it publicly after her confirmation. She knows, as does any Black woman in America, that if she gets upset, displays anger, or reacts with outrage, she will be immediately labeled an Angry Black Woman and all her credentials and hard work will not matter.”

Senator Booker went on to highlight her accomplishments, reminding the world that her work stands alone. “You did not get [here] because of some left wing agenda, you didn’t get here because of some dark money groups, you got here how every Black woman in America who’s gotten anywhere has done, by being, like Ginger Rogers said, ‘I did everything Fred Astaire did but backwards in heels.'”

Senator Booker’s comments are a reminder that Black women often face double standards in the workforce—they are expected to have more credentials, offer more proof of their abilities, and jump through more hoops to reach higher leadership positions—all the while receiving this kind of unfair treatment with a smile on their face.

“Don’t worry, my sister, don’t worry. God has got you, and how do I know that? Cause you’re here and I know what it has taken for you to sit in that seat,” Senator Booker said.

“You have earned this spot. You are worthy. You are a great American.”

In the midst of such a difficult process, Senator Booker's powerful speech shed light on how incredibly important it is that Judge Jackson is on the precipice of sitting on the U.S. supreme court, while also underscoring the unfortunate odds set against Black women everywhere. The exuberance in which he delivered both truths brought me to tears.

“I wanna tell you, this is why I get emotional, I’m sorry, but you are a person who is so you are a person that is so much more than your race and gender — you are a Christian, you are a mom, you are an intellect, you love books — but for me I’m sorry, it’s hard for me not to look at you and see my mom, not to see my cousins, one of them who had to come here and sit behind you, she had to have your back. I see my ancestors and yours…Nobody is gonna steal that joy. You have earned this spot. You are worthy. You are a great American.”

Tags: Ketanji Brown Jackson , Cory Booker , Judge Ketanji Brown Jackson , Supreme Court , Black women in politics , Senate Judiciary Committee hearing , microagressions
Support Feminist Media!
During these troubling political times, independent feminist media is more vital than ever. If our bold, uncensored reporting on women’s issues is important to you, please consider making a donation of $5, $25, $50, or whatever you can afford, to protect and sustain BUST.com.
Thanks so much—we can’t spell BUST without U.