Pussypedia.net is a free, bilingual, gender-inclusive, community-sourced, meticulously fact-checked, online encyclopedia that is all about the pussy* and put in terms that are easily digestible. The website has a portal that is full of rigorously vetted resources on all sorts of topics from gender to sexual and reproductive health; original articles (like “How to Wash It” and “Access to Abortion in the US and Latin America”); and also offers my personal favorite tool–a  3D interactive pussy*!

At the forefront of the Webby award-winning website (and book of the same name) are the Editor-in-Chief and co-founder Zoe Mendelson, and art director and co-founder María Conejo. Mendelson is a freelance journalist, researcher, and content strategist based in Mexico City–where she connected with Conejo, an extremely talented Mexican visual artist. 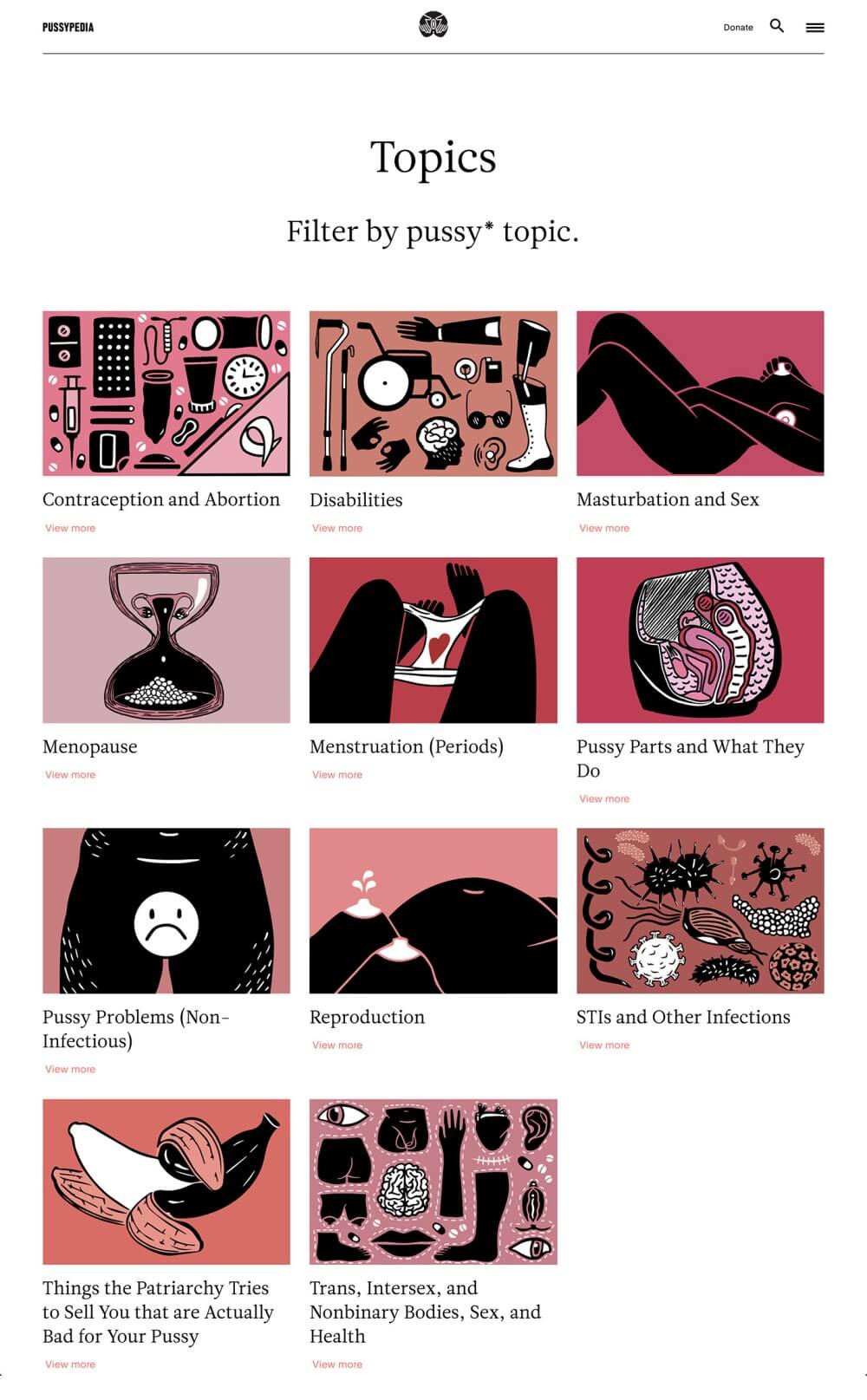 “There was a lack of easily accessible, high-quality information about pussies on the internet. That's an injustice,” Mendelson said on why they created the website. “We barely get any information about our pussies* in school sex ed, and our families rarely educate us either. The taboo around these topics means they're just not talked about. That causes our bodies to cause us confusion, shame, anxiety. It disempowers us. Knowledge is power.”

She’s not wrong. A couple of weeks ago I had a small dinner party which ended in me casting YouTube videos of vulvas and vaginas onto my TV. My friends and I could not agree on where the urethra was–some said in the vagina, some said on the vulva, and others wanted to call the whole argument off. It was alarming that a group of thirty-somethings who had the privilege of a college education knew so little about human anatomy. This is not to shame, but rather to recognize we are deeply unaware and undereducated when it comes to the pussy*. 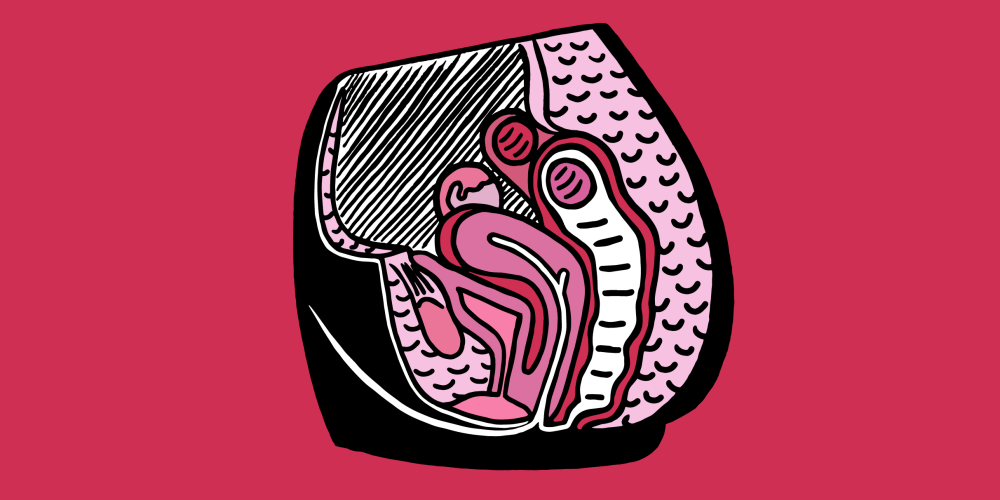 Before we continue, here is their statement on why they use the word pussy*:

*We propose a new gender-and-organ-inclusive use of the word which means “some combination of vagina, vulva, clitoris, uterus, bladder, urethra, rectum, anus, and who knows maybe some testes."

"We need new terms to talk about our sexuality and our bodies, so we can look at them from new perspectives, ones that aren’t patriarchal, misogynist, ableist or heteronormative," Conejo added. "It is important to use inclusive language because the world is not binary as we have been taught, sexuality and gender are fluid, a spectrum of possibilities."

An article from Healthline argues the importance of inclusive language: “Describing the entire group of ovulating people as ‘women’ excludes the experience of some trans men…Using precise, descriptive language rather than gender buckets isn’t only more inclusive, it’s just clearer.”

I am relieved to finally use a word that refers to the whole system. The commonly misused term “vagina” technically only refers to the vaginal canal and “vulva” excludes the internal clitoris. It is also important to consider how many of our “medically accepted” terms have origins in shame. The New York Times piece “Taking the ‘Shame Part’ Out of Female Anatomy” notes how the “vagina” translates to “sheath,” which “suggests that this organ’s primary function is to house a penis,” and that the “Latin term for the vulva was pudendum,” which means “the part to be ashamed of.” Not having clear language or language that is “scientifically neutral” to describe these body parts perpetuates misunderstanding, stigma, and a feeling of powerlessness.

"Knowledge about our bodies and pleasure are human rights and it’s unfair that this information is not out there for everyone," Conejo said. Thankfully, the community behind Pussypedia is trying to make a social and cultural change through the power of new (and accessible) language. 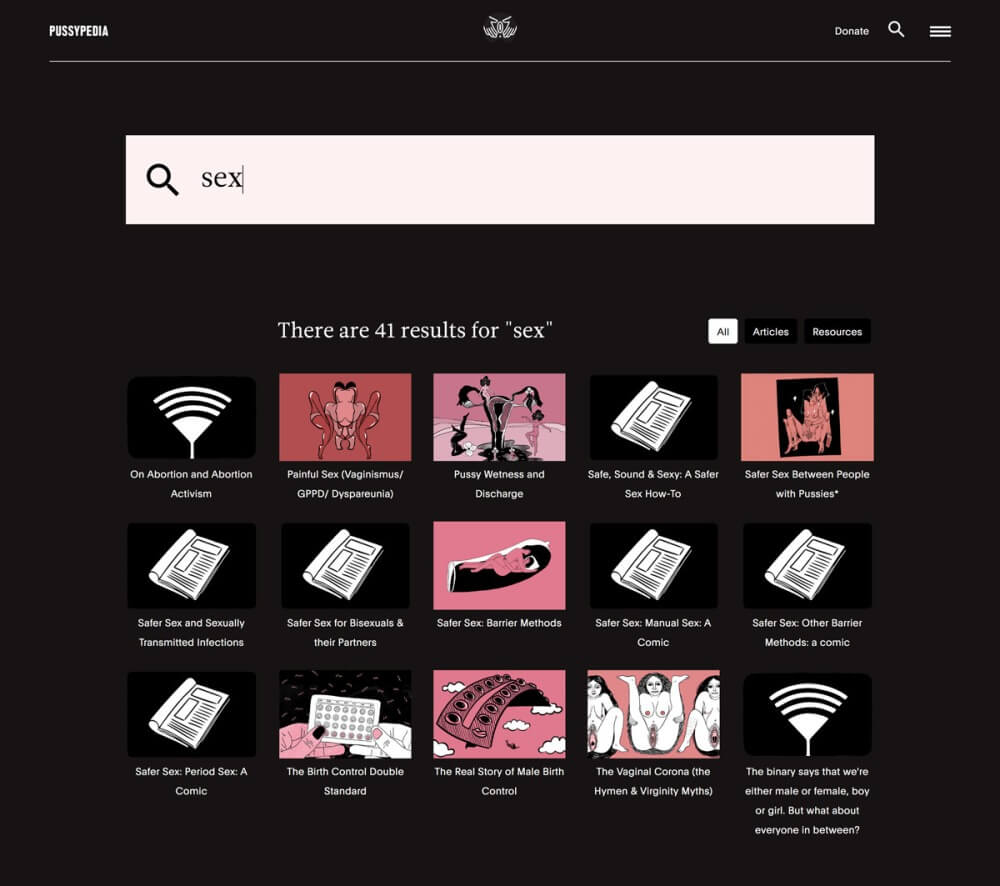 Pussypedia.net is a community-sourced project, with over 200 people from across the globe giving time and energy to help create this resource. The articles (except for the trans, nonbinary, intersex, and disabilities portals) were written on a volunteer basis. The founders edit the articles and then they pass them off to volunteer fact-checkers, translators, and illustrators.

If anyone has any questions about the pussy*, chances are it can be answered using Pussypedia's portal or the super useful 3D pussy* model. The benefit of a 3D interactive model over the more common (and often confusing) 2D diagrams is that you can virtually explore the pussy* holistically–you can see how the anatomy of the pussy* is interlocking and complex.

“Pussypedia is for everyone,” Mendelson said. “Obviously it's for people with pussies of all ages first, but we think people with penises should read it too.” And yes, I used the 3D interactive pussy* to find the urethra and I sent it to all my pussy* and penis owning dinner party friends.

Photos and media courtesy of Zoe Mendelson and María Conejo.