6 Things You Might Not Know About Judge Ketanji Brown-Jackson 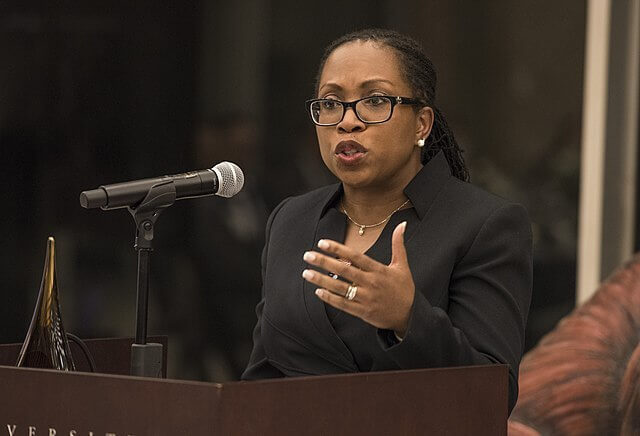 In a history-making decision, President Joe Biden formally nominated Judge Ketanji Brown-Jackson to sit on the United States Supreme Court, a seat previously held by Justice Stephen Breyer.  The 51-year-old has already been vetted by the Senate. Jackson received her commission in June of 2021 to the U.S. Court of Appeals in DC. If confirmed, she’ll not only be the first African-American woman to hold the position, but the 6th woman in history to serve on the highest court in the land.

I’m proud to announce that I am nominating Judge Ketanji Brown Jackson to serve on the Supreme Court. Currently serving on the U.S. Court of Appeals for the D.C. Circuit, she is one of our nation’s brightest legal minds and will be an exceptional Justice.https://t.co/iePvhz1YaA pic.twitter.com/Nzqv2AtN8h

Here are some things to know about this amazing woman.

1. She was one of Biden’s First Year Judicial appointments.

In March of 2021, Joe Biden announced his intent to nominate Jackson as a circuit judge for the U.S. Court of Appeals D.C. Circuit. In June of the same year, she received her judicial commission.

2. She attended Harvard—and Matt Damon was once her partner in acting class.

3. She’s got family in the Grand Ole Party—by marriage.

Jackson’s husband, Patrick Jackson, is the twin brother of former GOP House speaker Paul Ryan’s brother-in-law. (Did you catch that?)  Her husband's twin brother is married to Paul Ryan's sister (Jana Ryan). At her confirmation hearing in 2012 for her to become a judge, Ryan spoke highly of her. “Our politics may differ, but my praise for Ketanji’s intellect, for her character, for her integrity, it is unequivocal,” Mr. Ryan said according to the New York Times.

4. Her 11-year-old daughter once recommended her as Supreme Court judge to President Obama

Jackson and her husband have two daughters –Talia and Leila.  Leila appeared to be following in her mother’s persuasive footsteps at age 11, writing an impassioned letter to Former President Obama, petitioning for her mother to take Judge Antonin Scalia’s seat on the U.S. Supreme Court.  “She’s determined, honest and never breaks a promise to anyone even if there are other things she’d rather do. She can demonstrate commitment and is loyal and never brags. I think she would make a great Supreme Court justice,” Leila wrote in an excerpt of her letter as reported on Abovethelaw.com.

5. Jackson was the judge who sentenced the “Pizzagate” conspiracy theorist to four years in prison.

In 2016, a North Carolina man named Edgar Maddison Welch fired his AR-15 rifle into a Washington, DC pizzeria.  At his sentencing, Judge Jackson stated that Welch’s actions "literally left psychological wreckage,” according to the Associated Press.

6. She brings diverse work experience and perspective to the age-old institution.

Tags: Judge Kentaji Brown-Jackson , Paul Ryan , United States Supreme Court , Justice Stephen Breyer
Support Feminist Media!
During these troubling political times, independent feminist media is more vital than ever. If our bold, uncensored reporting on women’s issues is important to you, please consider making a donation of $5, $25, $50, or whatever you can afford, to protect and sustain BUST.com.
Thanks so much—we can’t spell BUST without U.