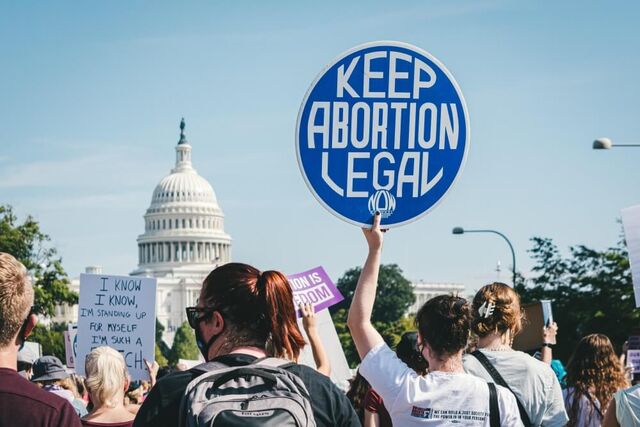 It seems that Trump-appointed Justice Amy Coney Barrett is upholding her prescribed role in the Supreme Court as she pushes for the overruling of Roe v. Wade. Following Wednesday’s Supreme Court hearing in Dobbs v. Jackson Women’s Health Organization, a Mississippi case that makes abortions illegal after 15 weeks of pregnancy, the court’s oral arguments highlight a clear divide between liberal and conservative judges while driving at the central question of abortion as a states’ issue or Constitutional right. While Justice Barrett advocates for forced pregnancy and adoption alternatives, liberal Justice Sonia Sotomayor seems to be a beacon of light in a seemingly hopeless future for women’s rights.

The principal argument of Mississippi’s Jackson Women’s Health Organization is the precedent that Roe v. Wade has reaffirmed for nearly 50 years: that having access to legal and safe abortion is a fundamental right for women to be equal and participatory members of the United States. The nature of fundamental rights is not to be left up to the discretion of state legislatures. In the case of Mississippi’s 15-week abortion regulation or Texas’ near-total abortion ban, state law is effectively forcing women to experience the life-altering consequences of physical, mental, and financial weight from pregnancy and childbirth. With nearly half of the women who have abortions falling below the federal poverty line and most abortion recipients between the ages of 20-24, state-sanctioned abortion regulations disproportionately affect low-income young women.

While these reasons alone are enough to justify individuals’ rights over their own bodies, conservative Justice Amy Coney Barrett holds personal objections to Roe that goes beyond her time on the Supreme Court. On Wednesday, Barrett, a mother of seven children, two of which are adopted, questioned the functionality of Constitutional abortion freedoms: “Both Roe and Casey emphasize the burdens of parenting. And insofar as you and many of your amici focus on the ways in which forced parenting, forced motherhood, would hinder women’s access to the workplace and to equal opportunities, it’s also focused on the consequences of parenting and the obligations of motherhood that flow from pregnancy. Why don’t the safe-haven laws take care of that problem?” Barret's oral arguments stress the significance of safe-haven laws as a viable solution for women to "terminate" motherhood at the conclusion of pregnancy, as opposed to physically terminating pregnancy at 23 weeks. Justice Barrett makes reference to Roe and Casey in overlooking adoption as a course of action for unplanned pregnancy.

Justice Barrett’s opposition to Roe v. Wade attempts to reason the misconception of adoption as a feasible solution for pregnancy. Under so-called “safe-haven laws,” which function to decriminalize the abandonment of infants at designated safe locations like hospitals or fire stations, Barrett suggests that women should simply carry on with unwanted pregnancy and seek out adoption to “take care of the problem” of motherhood. Although adoption has always been a potential choice for expecting mothers before Roe v. Wade, the notion that adoption and abortion are interchangeable is undoubtedly not the case. Adoption is a choice about whether or not to parent a child beyond pregnancy; however, it disregards the physical complications of childbearing and labor. Julie Rikelman, an attorney for Jackson Women's Health, replied to Barrett’s “solution,” stressing that forced pregnancy, "imposes unique physical demands and risk on women and in fact has impact on all of their lives, on their ability to care for other children, other family members, on their ability to work." Justice Barrett also fails to recognize the victims of rape, abuse, and trauma that would be forced under state regulation to carry an unwanted pregnancy to full-term. A CDC study from 2020 revealed that nearly 3 million women in the U.S. have experienced rape-related pregnancy. Barrett’s ignorant approach to effectively shutting down abortion accessibility in favor of adoption is not a universally applicable solution, even if she grounds her argument through her own personal experience of adopting children.

While Justice Barrett slowly begins to wear away at Roe v. Wade, liberal Justice Sonia Sotomayor asserts precedent over politics. The Obama-appointed justice referenced the 1992 Supreme Court case of Planned Parenthood v. Casey, which reaffirmed Roe v. Wade and established a new “undue burden” standard to determine whether abortion restrictions violate one’s fundamental rights. State lawmakers are now pushing for these new strict regulations, “because we have new justices on the Supreme Court,” which Sotomayor points as a threat to the future of both women’s bodily autonomy and the democratic system as a whole. By overturning Roe v. Wade, the state legislature would seemingly trump Constitutional law. Justice Sotomayor believes the overruling of Roe v. Wade will effectively tarnish the reputation of the court system: “Will this institution survive the stench that this creates in the public perception that the Constitution and its reading are just political acts? I don't see how it is possible.” Sotomayor additionally questioned Mississippi Solicitor General Scott Stewart about potentially introducing an even more restrictive six-week abortion ban signed but blocked from taking effect back in March 2019.

Now Sonia Sotomayor picks up the same point about the danger to the Supreme Court's legitimacy. She notes that 15 justices over 30 years "of varying political backgrounds" have reaffirmed the viability line from Roe and Casey.

With a conservative supermajority on the Supreme Court, tossing out Roe v. Wade will enable state legislature to ban abortion entirely. According to the Guttmacher Institute, a pro-abortion rights research group, the overturning of Roe would make abortion illegal in 22 states. If a 15-week ban is enforced now, what’s to say a 12-week ban won’t be proposed next year or a 6-week ban like we are already seeing? The philosophies of Justice Barrett and Justice Sotomayor are reflective of the deep divisions across America. Following Women’s March October National March to Demand Reproductive Freedom in Washington D.C., hundreds of pro-choice and pro-life demonstrators rallied outside of Capitol Hill early Wednesday morning, and Roe v. Wade is just barely hanging on by a thread. Still, it’s not going down without a fight. Just back in October, following the controversial Texas SB8 abortion restriction, a San Antonio-based physician violated the near-total ban and was later sued to trigger a court review of the bill. While the future of Roe is most likely up in the air until Summer 2022, abortion rights will undeniably be a central topic in the next presidential election.

Tags: abortion , pro-choice , pro-life , reproductive rights , Texas Abortion Law , women's rights , Supreme Court , Amy Coney Barrett
Support Feminist Media!
During these troubling political times, independent feminist media is more vital than ever. If our bold, uncensored reporting on women’s issues is important to you, please consider making a donation of $5, $25, $50, or whatever you can afford, to protect and sustain BUST.com.
Thanks so much—we can’t spell BUST without U.