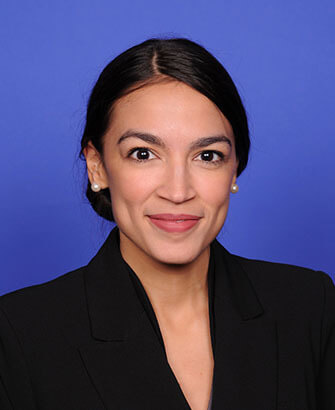 Over the last month, the battle between Democratic Congresswoman Alexandria Ocasio-Cortez and Republican Paul Gosar has continued to heat up. On Sunday, November 7th, Gosar took to Twitter to share an anime-themed parody video featuring many political faces. In the 92-second short video with the caption, “Any anime fans out there?” Gosar, along with other GOP members were depicted battling a giant monster with the face of Ocasio-Cortez . Gosar, starring as the Attack on Titans’ protagonist Eren Yaeger, later launches into the sky to slay a giant floating head of President Joe Biden. In further alignment with Gosar’s political ideologies, the video is plastered with the text “murder,” “drugs,” “crime,” alongside images of Mexican immigrants across the US border.

The video was received with much concern and backlash, as Ocasio-Cortez took to her personal Twitter account to condemn her peers:

So while I was en route to Glasgow, a creepy member I work with who fundraises for Neo-Nazi groups shared a fantasy video of him killing me

And he’ll face no consequences bc @GOPLeader cheers him on with excuses.

Arizona Congressman Paul Gosar is an avid far-right Republican who has consistently backed white nationalist conspiracy theories. Beyond advocating on behalf of former President Trump’s “Big Lie” election theory, Gosar and members of the GOP attempted to launch a white nationalist caucus, the America First Caucus. Supported by QAnon supporters like Marjorie Taylor Greene, this congress elicited white nationalist arguments from the early 20th century, claiming, “America is a nation with a border, and a culture, strengthened by a common respect for uniquely Anglo-Saxon traditions.” Similar to civil unrest during the 1910s, raging with pandemics, racial divide, and economic uncertainty, these ideals are once again being brought to the American people.

Following Gosar’s anime tweet, the House of Representatives conducted a censure vote against him in the days following. The final vote almost fell on an equal split, 223-207-1, with all 221 Democrats voting for Gosar to be censured. As the highest form of discipline before expulsion, Gosar’s censoring is a critical moment of tension between the GOP and Democratic parties.

Despite what appears to be a resolution, House minority leader Kevin McCarthy and Republican leaders have refused to publicly condemn Gosar’s actions, with McCarthy going as far as to call the censure vote an “abuse of power.” While Gosar has continued to defend his actions, insisting that the video was not meant to be a threat of physical violence. Even as an encapsulation of his fight over immigration policy, in light of the Trumpian era of social media-ignited unrest, solidified by the January 6th Capitol Insurrection, it’s evident that politicians wield much power online.

According to a study by the Pew Research Center, legislative activity has dramatically increased since 2016. Within the first five months of 2020, Congress collectively produced an average of 73, 924 tweets. The average number of Tweets shared per month by each member of Congress jumped from 59 posts in 2016 to 107 posts in 2020. In terms of partisan difference, the average Democratic member of Congress has over 17,000 more Twitter followers than the average Republican Congressman. Politicians, liberal or conservative, have put social media engagement at the forefront of their agendas.

This is not the first incident of fellow politicians targeting Congresswoman AOC. In July 2020, GOP lawmaker Ted Yoho got in a verbal altercation with Ocasio-Cortez on the House steps, calling her a “fucking bitch.” Witnesses at the scene heard Yoho call AOC “disgusting” and that she was “out of her mind.” Although Yoho issued a face-saving apology, however, standing by his claim that he did not call her what she was alleging, GOP members have a consistent track record in undermining and threatening female politicians. AOC continues to face the brunt of the attacks based on her more upfront political stance, as well as being the youngest woman ever elected to Congress. Whether based on political polarity or generational distinctions, gender-based threats of violence are an intolerable act on behalf of lawmakers.

While this may seem like the end to a saga, Representative Gosar retweeted his anime video of AOC minutes after the results of the House censure vote. It’s increasingly evident that any feelings of regret were a facade. In a closing statement following Gosar’s censorship, Democrats continue to support the targeting of Congresswoman AOC: “Violence against women in politics is a global phenomenon meant to silence women and discourage them from seeking positions of authority and participating in public life, with women of color disproportionately impacted.”