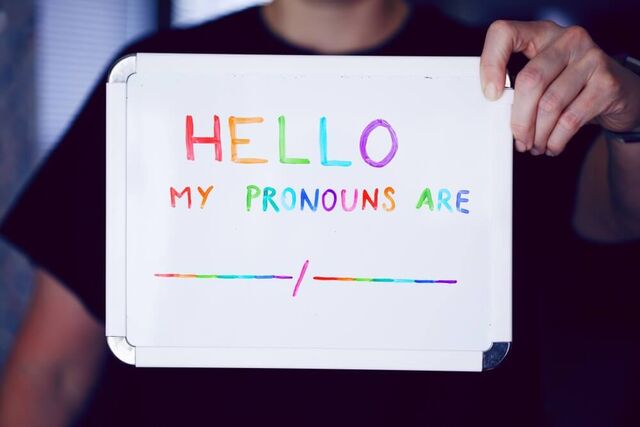 The process of rethinking your gender identity is complicated and not without hazards. But it is important that we take the time to think about it. As a French native speaker this journey was made very complicated by my own language. Thinking about my gender identity is easier in English and feels much more complicated than in French. But why is that? What are the specificities that make the French language so complicated to work with gender non-conforming identities? I did my research, and linguistics has a big part in it.

For all of those who don’t know anything about the French language, there is one main thing to remember: much like Spanish, every noun is grammatically either male or female and every adjective has to agree with the gender of the noun it is describing. For instance “a car”, une voiture, is female and a “movie”, un film, is male. As French native speakers, we see everything through the lens of gender. Which leads to two separate issues when it comes to gender inclusivity. On one hand we have the issues of male/female sexism, and on the other hand we have gender neutrality.

Languages are a vehicle for sexism, not a cause. As Julie Abbou, French doctor in Language Sciences and professor of “Gender, Languages and Critical Approach” at the University of Paris points out during our interview, sexism, like water, infiltrates every part of a society, including the language. What that means is that, through the French language we can more easily spread some gender based stereotypes. For instance, according to a study in psycholinguistics, the mental images a reader will have while reading are widely linked to stereotypes. For instance, when referring to cashiers, the mind assimilates it to women while doctors are affiliated to men. What that shows is that we essentially have gender biases at the root of the way we express ourselves.

On the other side we have the question of gender neutrality. In France the discussion around gender non-conforming people and their place in society has been raised more and more in the past few years by feminists and the LGBTQ+ community. In 2016 France passed a law that allowed transgender people to change their legal status without have to resourt to surgery. Although it was a first good step, people still have to go to court to make the change happen. On another level, many feminist and trans activits have been talking for a few years about implementing a a more inclusive writing as a way to fight against gender stereotypes and to be more inclusive to gender non-conforming people. Unfortunately this has been very complicated. In 2017, French Prime Minister of the time, Edouard Philippe, banned inclusive writing from official texts and statements. This decision reflects the state of mind of French higher institutions. That same year, the French Academy, the institution in charge of looking after the french language, released a statement declaring “On this occasion, it is not so much as guardian of the norm as guarantor of the future that she is sounding the alarm: in the face of this 'inclusive' aberration, the French language is now in mortal danger, and our nation is now accountable to future generations.”

From a social standpoint, French people seem reluctant to accept inclusive writing. Those higher institutions still fail to recognize the importance of including non-binary people and make it easier for them to talk their language. While talking with Roma, a french non-binary cinema student, they explained their experience of being non-binary in France “I know that most of my cisgendered (people that identify with the gender assigned at birth) friends gender me either with ‘he’ or ‘she’, which I am ok with because every pronouns is fine with me, but only my trans friends use neutral sentences. That’s when I realize that however you identify cis people will always refer to what you have between your legs, and, in a way it made me feel very invalidated.”

The main reason why implementing inclusive writing is taking so much time is because it is judged to be complicated and would be confusing for many. It is indeed difficult to avoid gender when speaking French because it is grammatically everywhere in our sentences. During our interview, Roma, a French non-binary cinema student, highlights the difficulty in being gender neutral when talking: “It's a little bit painful to have a language that genders absolutely every noun/adjective. And sometimes there are words we really don't know how to adapt to neo-pronouns.”

Indeed, originally French only has two pronouns, She, which is Elle, and He which is Il. Because this cannot work with non-binary people, the trans community adapted to this issue by creating a neo-pronoun, iel, the french equivalent of they. Unfortunately it can be tricky to make this neutral pronoun work in a sentence.

A few solutions exist to answer this issue. Florence Ashley, transfeminist jurist and public speaker, wrote an academic publication in which they explain what are the possible ways to be more gender neutral, rather than inclusice, while speaking French."As one might expect in a language that, like French, recognizes only two grammatical genders, referring to non-binary people can pose some difficulties [...]

Inclusive French is not always respectful of non-binary people. It is often only inclusive of women." they highlights in their publication. As Julie Abbou had explained during our talk, we are in  a transionary time where it is important to consider those new ways of speaking and implement them in our daily lives . As explained by Abbou during our interview,  “I think we should take advantage of the playful dimension of this creation and explore. Indeed, there are several proposals, obviously some work better than others and then there are some that will make consensus. We don't always know why some work better than others”.

Although there is still a long way ahead of us in terms of gender inclusivity, it is important to consider the small steps that were taken in the past few years. For instance, in 2017, a very famous publishing house, Hachette, released a school book written in an inclusive way for 9 years old. The sooner people are familiarized with such forms the easier it will be to popularize them. At the same time, the first  transfeminist audiovisual media, XY Media, was created in 2021 and is leading towards a more gender inclusive approach in mediatic spaces.

There is still a long way to go in France to reach and popularize a more inclusie and neutral language. The male/female grammatical model is still very fixed in our mind. Although it is important to aknowledge that the situation has evolved, mostly within feminist and the LGBTQ+ community.

Photo by Sharon McCutcheon on Unsplash

Tags: gendered language , gender-inclusive language , French , Non-Binary , evolution of language
Support Feminist Media!
During these troubling political times, independent feminist media is more vital than ever. If our bold, uncensored reporting on women’s issues is important to you, please consider making a donation of $5, $25, $50, or whatever you can afford, to protect and sustain BUST.com.
Thanks so much—we can’t spell BUST without U.