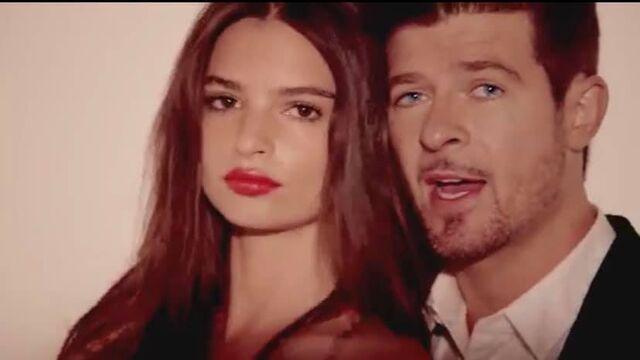 Since its release, the 2013 music video for "Blurred Lines" by Robin Thicke has caused a ton of controversy due to the sexy portrayal of the half-naked models dancing. In her forthcoming book My Body, the 30-year-old model, Emily Ratajkowski reveals that Thicke, 44, “grabbed her bare breasts” during the video’s filming. The book is set to be published on November 9th.

With its predatory-like lyrics, the song seemingly glorifies rape culture as Thicke claims that he wants to “domesticate” the subject and that he’s going to “take a good” girl and have sex with her after stating that he’ll still make advancements on her even if she “can’t hear what I’m tryin’ to say. If you can’t read from the same page.” What Thicke is suggesting here is that even if the subject does not want to have sex with him and is unaware of his flirtations, he’ll still make advancements towards her, ignoring her consent. The music video flaunts three half-naked women with Ratajkowski as the center model. Joining the models are Thicke, rapper and producer Pharrell Williams, and rapper T.I. who are all fully clothed in suits, singing repeatedly “I know you want it.”

The lines claim that they know a woman wants to have sexual intercourse without her even saying so, suggesting that consent doesn’t matter to the singer. As the main model, Ratajkowski grinds against Thicke, completely topless, while he purrs those predatory words into her ear. The Times reveals that Ratajkowski wrote in her book that the singer groped her breasts from behind: “Suddenly, out of nowhere, I felt the coolness and foreignness of a stranger’s hands cupping my bare breasts from behind.” She writes,  “I instinctively moved away, looking back at Robin Thicke. He smiled a goofy grin and stumbled backward, his eyes concealed behind his sunglasses. My head turned to the darkness beyond the set.”

Despite writing that Thicke’s assault made her feel “naked for the first time that day,” Rotajkowski states in her book that she was “desperate to minimise” the incident which she now knows was the wrong thing to do. Feeling “humiliation pump through [her] body,” Ratajkowski avoided eye contact with the singer. According to The Guardian, her book states, “I didn’t react- not really, like I should have.” Due to the sexist culture that still lingers today, over 2,200 part-time and full-time female employees concluded that sexual harassment is sadly still very rampant in American workplaces.

According to Ratajkowski and the video’s director, Diane Martel, Thicke was drunk at the time, but this does not excuse his actions.

Martel said, “she intended for the video to subvert power dynamics, placing the men in an inferior position as the women ignored and mocked them,” but it’s clear that the men in the video don’t feel threatened by the women. For Ratajkowski, any sense of female empowerment was robbed from her when Thicke grabbed her breasts.

She writes, “With that one gesture, Robin Thicke had reminded everyone on set that we women weren’t actually in charge.”  She continues, “I didn’t have any real power as the naked girl dancing around in his music video. I was nothing more than the hired mannequin.”

Martel has said that “Robin sheepishly apologized. As if he knew it was wrong without understanding how it might have felt for Emily.”

According to a publisher’s description, Ratajkowski’s book will explore “topics of feminism, sexuality, and power, of men’s treatment of women and women’s rationalizations for accepting that treatment,” through a series of moments in Ratajkowski’s life.

Thicke has not yet publicly responded to Ratajkowski’s allegations. Ratajkowski has never written about the violation before but was reminded of it when she noticed that Thicke had unfollowed her on Instagram, says CBS News.

Tags: Emily Ratajkowski. Robin Thicke. T.I. Pharrell Williams. Music. Blurred Lines. Sexual Assault. Sex. Consent.
Support Feminist Media!
During these troubling political times, independent feminist media is more vital than ever. If our bold, uncensored reporting on women’s issues is important to you, please consider making a donation of $5, $25, $50, or whatever you can afford, to protect and sustain BUST.com.
Thanks so much—we can’t spell BUST without U.