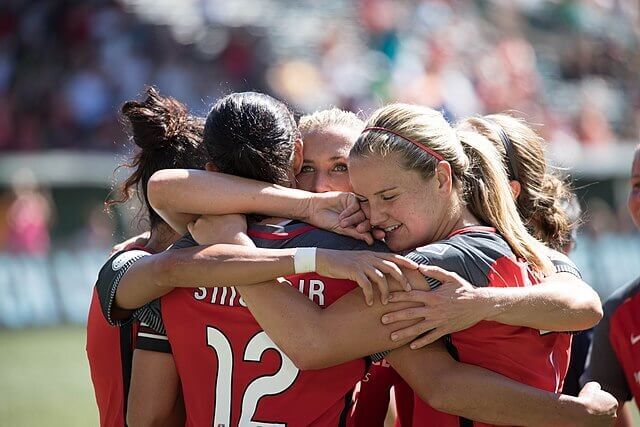 The National Women’s Soccer League team North Carolina Courage fired its head coach, Paul Riley, on Thursday in light of sexual abuse allegations made by several of Riley’s former players. Riley is now the third coach since August to be fired from the league because of misconduct, leading members of the NWSL Players’ Association to call for systematic change within the league.

In a tweet on Thursday, the NWSLPA published a list of three demands for the NWSL, stating that, “We will no longer be complicit in a culture of silence that has enabled abuse and exploitation in our league and in our sport.” Among the demands, the NWSLPA asked that the league initiate an independent investigation into the allegations, which were originally released by The Athletic on Thursday morning.

SYSTEMIC ABUSE PLAGUING THE NWSL MUST NOT BE IGNORED pic.twitter.com/WlhcWW7R8m

These allegations against Riley had been reported to the NWSL before with no consequences to his coaching career. In fact, after the Portland Thorns launched an investigation against Riley in 2015, he was hired mere months later to coach the Western New York Flash, another NWSL team. Only after The Athletic published its investigative report, in which it spoke to over a dozen of Riley’s former players, was Riley terminated from the league.

In The Athletic’s report, two former players, ​​Sinead Farrelly and Mana Shim, spoke on the record about their abuse by Riley. Farrelly revealed that Riley coerced her into having sex in his hotel in 2011 when he was coach of the Philadelphia Independence.

“I felt claimed,” Farrelly said of the encounter. “He claimed me; that’s what his touch felt like. I just remember thinking: ‘Is anyone else seeing this?’ I felt under his control.”

Additionally, Farrelly and Shim recalled Riley forcing them back to his apartment and pressuring them to kiss each other. Shim detailed another instance in which Riley invited her to a game “film session” at his hotel and showed up in only his underwear. Both women, as well as other players who wished to remain anonymous, revealed that Riley had often made comments about their weight and sexual orientation and had hosted mandatory drinking events for his players.

NWSL commissioner Lisa Baird issued a statement on Thursday expressing that she was “shocked and disgusted” by Riley’s behavior. She also noted that the league was taking further investigative steps by reporting the allegations to the United States Center for SafeSport.

Come Friday, however, Baird was officially ousted from her position, along with NWSL general counsel Lisa Levine.

Though it remains unclear how much Baird knew of other coaches’ abuse, she was informed of Riley’s case by Farrelly herself. On Thursday afternoon, Orlando Pride player Alex Morgan posted on Twitter an email exchange between Farrelly and Baird, in which Farrelly explained her past complaints against Riley to Baird.

In her reply, Baird stated that, “We reviewed our files and I can conclude that the initial complaint was investigated to conclusion. Unfortunately, I cannot share any additional details.” Farrelly received no further communication from Baird.

Since news of Riley’s termination broke on Thursday, many high-profile National League players have voiced their support for Farrelly, Shim, and all other players who have come forward against NWSL coaches. Focus remains on how the league can ensure the protection of its players moving forward and hold those in positions of power accountable.

Meanwhile, Portland Thorns player Becky Sauerbrunn explained that, as the league currently operates, players are forced to take serious issues like abuse into their own hands. “To be where we are today is unacceptable,” she said. “The league and every club have to do better….We should be leading in this space, not lagging behind.”

What’s to be done? Among its list of demands, the Players’ Association called for the National League to suspend any league or club staff who are accused of breaching anti-harassment conduct guidelines, no matter when the incident occurred. Furthermore, the Players’ Association has partnered with Lighthouse Services, Inc. to provide players with an anonymous hotline to report abuse.

On Sunday, the NWSL announced that it had hired a law firm to make recommendations on reforms to the league moving forward. The U.S. Soccer Federation also wrote on Sunday that it has hired former acting Attorney General Sally Yates to investigate “allegations of abusive behavior and sexual misconduct in women's professional soccer” within its own ranks.

Female soccer leagues around the world have risen to the forefront of a powerful reckoning.  FIFA, the governing body of international soccer, promised a new vigilance in investigating abuse allegations. Other leagues, such as Canada Soccer have expressed their support of NWSL players and pledged their full commitment to all investigations moving forward

Since its founding in 2012, the NWSL has emerged as America’s longest-running women’s soccer league: a notable history that has, unfortunately, been marred by patterns of abuse. Earlier this year, the league’s New York/New Jersey team, Gotham F.C., fired its general manager, Alyse LaHue, for violating league policy. Even before the NWSL came to be, its predecessor, Women’s Professional Soccer, discovered that a team owner had repeatedly bullied and threatened players.

Now, the tide is changing. Current and former players are speaking up about abuse, and leagues are finally listening. This week’s revelations have shown that there is still vast institutional change needed to rework the power structures in women’s soccer.

The Paul Riley case has shown more than any other that female soccer players are still fighting for control on their own playing fields. Farrelly’s statement of feeling “claimed” by Riley is merely the tip of the iceberg of larger systemic issues that have for years gone unaddressed.

“It became evident, especially on Thursday night, that we needed to take what's happening right now, really, at one point, one hour at a time,” Meghann Burke, executive director of the NWSLPA, said in an interview with NPR's Michel Martin on Saturday.

“I will tell you that the messages I've been getting are that we're doubling down. This is just a pause to rest, but we are ready to hold every single person to account who had a role in this.”

R. Kelly, R&B Singer and Producer, Finally Convicted of Sex Crimes After Decades of Allegations and Crimes Against Underage Girls and Boys

Sha'Carri Richardson Is The Newest Olympian And The Fastest Woman In America: “I Just Want The World To Know That I’m That Girl

Tags: National Women’s Soccer League , North Carolina Courage , Portland Thorns , women’s sports , sexual abuse , soccer
Support Feminist Media!
During these troubling political times, independent feminist media is more vital than ever. If our bold, uncensored reporting on women’s issues is important to you, please consider making a donation of $5, $25, $50, or whatever you can afford, to protect and sustain BUST.com.
Thanks so much—we can’t spell BUST without U.