Texas Abortion Ban: What the F*ck is Up With This New Law That Turns Everyday People Into Bounty Hunters? Here's the Facts, No Bullsh*t 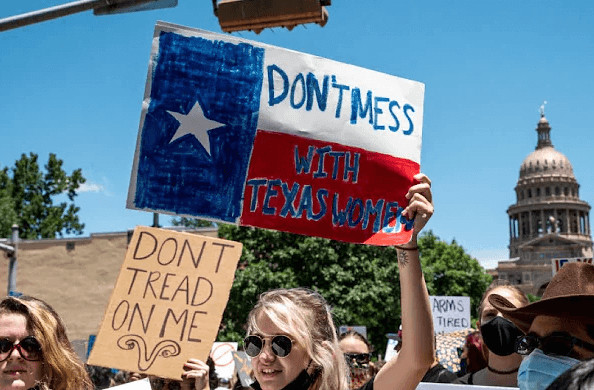 Since early September, many of us have been asking ourselves, what the f*ck is up with this Texas abortion ban? Over the last month, we’ve seen pro-choice activists protesting on and offline, trying to protect the rights we thought we'd nailed down since 1973. In anticipation of the October 2nd National Women’s March to defend reproductive rights, we have to talk about just how much the latest Texas abortion ban has been weaseling its way around Roe vs Wade, so much so that the Supreme Court itself can’t even get a handle on it! Has the news around this bullshit law confused you? Same. So, let's talk about it.

This law is different from previous abortion bans because Texas residents themselves can sue abortion providers. It was carefully written to exploit a loophole in the Supreme Court's prior decisions. Rather than government officials enforcing these restrictions—which would, in fact, be in violation of Roe v Wade—this law relies on private filing civil lawsuits under “statutory damages” for anyone helping someone to have an abortion performed past the 6-week pregnancy mark. That applies to doctors, nurses, clergy people, spouses, and Uber drivers. If you even talk to someone about helping them get an abortion after 6-weeks, you could potentially be sued for up to $10,000. Big yikes.

This sneaky tactic on behalf of Texas lawmakers has effectively terrorized abortion clinics into stopping their services out of fear that the financial risk of being sued left and right is too much to handle. Out of the 24 abortion clinics in Texas, many contemplate closure, with three out of four clinics in the San Antonio area temporarily stopping procedures. Even before September 1st, the four Texas-based Whole Woman’s Health clinics in Austin, Fort Worth, McKinney, and McAllen, all began limiting their operations. It's only a matter of time before even more clinics throw in the towel.

Almost immediately, major Texas abortion providers, including Planned Parenthood, had filed emergency applications asking the courts to block the Texas law. In response, the Supreme Court called a shadow docket, which allows for an emergency decision to be reached amongst the nine justices without waiting months upon months for deliberation. The decision from the Supreme Court was reached, coincidentally, the day after September 1st, making the Texas law a reality. What a shock.

In a 5-4 ruling, the Supreme Court refused the appeal for blocking the Texas abortion law. Amongst the five includes three Trump-appointed judges *shivers,* with the four dissenting justices attempting to freeze the Texas law until further deliberation. Without our feminist icon Ruth Bader Ginsburg, who defended abortion rights throughout her career, these results would have likely swung in the opposite direction had it been this time last year. It makes us genuinely wonder how the “highest court in the land” is now practically met in a stalemate with Texas.

This “bounty system” of incentivizing citizens to take legal action into their own hands is threatening abortion regulations across the country, with many red states seeing Texas’ success as the green light for their own plans to restrict abortion.

In order to trigger further review of the Texas law, these cases must be appealed again to the Supreme Court. Abortion providers can offer clients abortions after the 6-week mark, face hefty lawsuits, raise a defense that the Texas law is unconstitutional, and have the case appealed through the state court system. We are already seeing the ball rolling, as San Antonio-based physician Dr. Alan Braid was recently sued for performing an abortion (don't worry though, it's actually a good thing,) past the 6-week period. On December 1st the Supreme Court will hear a case about Mississippi’s abortion law, which bans abortion after 15 weeks of pregnancy. The Mississippi abortion restriction will be challenged by Roe v. Wade, with the Supreme Court contemplating the future of abortion rights across the country. Fingers crossed.

Tags: Texas Abortion Law , abortion , abortion bill , pro-choice , pro-life , reproductive rights , Supreme Court , Roe v. Wade
Support Feminist Media!
During these troubling political times, independent feminist media is more vital than ever. If our bold, uncensored reporting on women’s issues is important to you, please consider making a donation of $5, $25, $50, or whatever you can afford, to protect and sustain BUST.com.
Thanks so much—we can’t spell BUST without U.