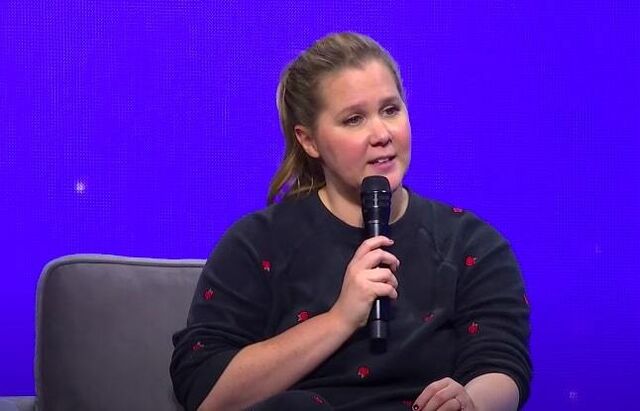 Amy Schumer is a survivor. The 40-year-old comedian and Trainwreck star shared in an Instagram post on Sunday that she had her uterus and appendix removed earlier this month to combat endometriosis.

Schumer first posted about her struggles with the disease in an Instagram video on September 18, the morning after her surgery. Still in her hospital bed, Schumer addressed her ongoing struggles with the disease and her gratitude for receiving a speedy diagnosis and treatment. Since then, she’s posted regular updates on Instagram about her post-surgery healing process.

“I’m feeling really hopeful, and I’m really glad that I did it,” Schumer said in a second video posted last week. “I think it’s going to change my life."

Endometriosis is a disease in which the inner tissue lining of the uterus starts to grow outside of the uterus, causing inflammation and intense pain, especially during menstrual periods. In more severe cases, the tissue lining may grow over the ovaries, creating cysts called endometriomas. These cysts not only create chronic pelvic pain, but may also lead to infertility if not properly treated.

Schumer has been open about the difficulties she had during her pregnancy with her son, Gene (now 2), in 2019. “We did [in vitro fertilization], and IVF was really tough on me. I don’t think I could ever do IVF again,” Schumer said in an Aug. 2020 interview with Willie Geist.

In Sunday’s post, Schumer further addressed the link between her endometriosis and her pregnancy struggles:  “Anyone wondering if this is connected to my difficult pregnancy and hyperemesis I say f–k yes!” she wrote.

Schumer revealed that doctors found “chocolate” cysts (nicknamed such because of their dark brown color), in both of her ovaries. In total, she had 30 “spots” removed from her ovaries during surgery, 26 of which tested positive for endometriosis.

Her appendix was removed because endometriosis had attacked it and was only later found to possess a tumor. “All my lifelong pain explained and lifted out of my body. I am already a changed person. I am bursting with joy for the new energy I have to be with my son,” Schumer said.

Endometriosis affects more than 11 percent of women between the ages of 15 and 44 and is especially common amongst women in their 30s and 40s. However, the Society for Women’s Health Research reported in 2019 that there are major gaps in endometriosis research which have stalled paths to treatment for millions of women.

"[M]ore than half of endometriosis patients had been told by health care providers that nothing was wrong with them,” said the report’s lead author, Sawsan As-Sanie, M.D., MPH, a gynecological surgeon at the University of Michigan’s Von Voigtlander Women’s Hospital.

“Stigma surrounding the disease and societal normalization of women’s pain continue to stand in the way of timely and accurate diagnosis and effective treatment.”

Now, Schumer is using her platform to educate others about endometriosis and lobby for more extensive research into the disease. On Instagram, she invited her followers to share their struggles with endometriosis under the hashtag #myendostory and said she hopes that sharing her own experience has raised more awareness of endo's effects.

“So many people don’t even know the word ‘endometriosis,’ and it’s like one in 10 women has it and it’s really painful and debilitating and – and you don’t have to live with it,” Schumer said. “Woman [sic] are made to feel like they are just supposed to ‘tough it out’ but that is bullshit. We have a right to live pain free. Have you ever heard of endo?”

Tags: Amy Schumer , endometriosis , women's health , pregnancy , hysterectomy.
Support Feminist Media!
During these troubling political times, independent feminist media is more vital than ever. If our bold, uncensored reporting on women’s issues is important to you, please consider making a donation of $5, $25, $50, or whatever you can afford, to protect and sustain BUST.com.
Thanks so much—we can’t spell BUST without U.