Hashing It Out: #MeToo Trailblazer Tarana Burke Opens Up About Her Message of Solidarity and Writing Her Remarkable New Memoir, Unbound 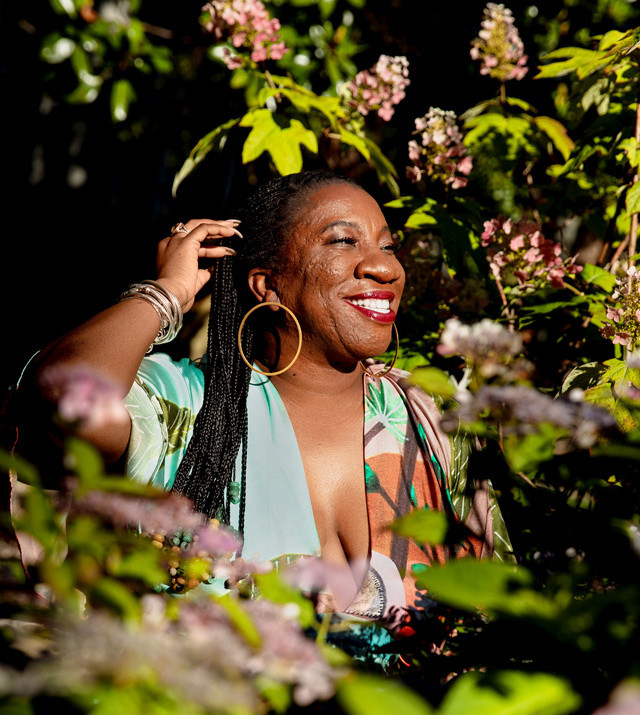 “When I went viral,” Tarana Burke says, “it amplified the work that I was already doing. It gave me an opportunity to mainstream the work and ideas that I had been carrying for a long time.”

Four years ago, on October 15, 2017, Burke found herself catapulted into a long-overdue national conversation. At the time, she was the program director for the Brooklyn nonprofit Girls for Gender Equity. A lifelong activist who saw a lack of empathy in traditional responses to sexual assault, Burke had been using the phrase “me too” for years to expand the dialogue around sexual violence. She was fresh off a night out with her girlfriends when she awoke to several text messages alerting her to the fact that that “me too” was now all over the Internet.

It began after The New York Times and The New Yorker published rape and assault allegations against movie mogul Harvey Weinstein, when actor Alyssa Milano sent out a tweet urging anyone who’d survived sexual abuse to tweet, “Me too.” The hashtag #MeToo quickly took off with thousands—and later, millions—of people, including celebrities like Lady Gaga and Gabrielle Union, sharing their stories. The following day, after being made aware of Burke’s existing movement, Milano credited her on Twitter. “It’s not about a viral campaign for me,” Burke—whose activism has always centered Black people—said at the time. “It’s about a movement.”

Due to #MeToo’s introduction into the cultural lexicon alongside the accusations against Harvey Weinstein, it is closely associated with the film and TV industries. In January 2018, three months after Milano’s tweet, Burke was invited to attend the Golden Globes as actor Michelle Williams’ guest. “It was a realization for me that, ‘Oh, all kinds of people need this. It’s not just little Black girls, or people pushed to the margins. It’s really anybody who’s affected,” Burke tells me via Zoom from her home in Baltimore. Reasserting her focus on marginalized communities, she notes, “Sexual violence doesn’t discriminate, but the response to it does.”

With the continued growth of the #MeToo movement, Burke has become one of our most visible activists and advocates for sexual abuse survivors. But her captivating new memoir, Unbound: My Story of Liberation and the Birth of the Me Too Movement (out September 14), reveals that these last four years are just a tiny sliver of a life of incredible highs and harrowing lows, and a decades-long activism career spent centering Black women and girls.

Born and raised in the Bronx in the 1970s and ’80s, Burke was a bookworm and a music lover as a child. She was inspired by her literary hero, Maya Angelou, and early rap songs that proclaimed the Black woman Queen, but struggled with shame, the aftereffect of surviving multiple sexual assaults. Burke says that, while she had friends, she opened up more in her diary entries than she ever did with a living, breathing person. “I have all of my journals going back to about 14 years old—I can’t throw away my feelings. I could not have gotten through this book without them,” she says of the journaling habit she picked up from her mother. “The journaling allowed me to explore these thoughts that I had that I didn’t feel were ready for prime time. I didn’t talk about things like the abuse and all that stuff out loud. Actually, I talked about it in code, even in my journal. It’s interesting how close we hold that.”

She finally lets go of so much in Unbound, which includes many details that she shares for the first time about her life as a survivor, daughter, mother, lover, activist, and friend.

“The book is my life story,” says Burke. “It’s definitely scary to be so open. I felt like I took my diary, wrapped it in a pretty cover and said, ‘Here y’all, read my business!’”

Unbound is also decidedly not about moguls and movie stars. “I could tell the story of going to the Golden Globes or whatever, but that’s not a movement. Maybe next time. Or maybe in book five,” she says with a laugh. “I know hella people will be disappointed, but I know if I go there, people will be like, ‘What did Alyssa Milano say?’ and ‘What was it like meeting so-and-so?’ and that’s not really relevant. This is about my story, which is what propelled me to want to do this work.”

Part of telling her story is opening up about the ways in which people she loves, or has loved, have failed her. “It’s not just the founding of the movement; it’s also my survival story,” says Burke. “It’s about the ways in which I’ve had to move through my life and experiences.” As a result, she’s had to reach out to loved ones to avoid anyone being blindsided by the things she discusses in her book. “I’m still having those conversations,” she says. “Some of them have been very, very difficult, and there are others I’m not looking forward to. My therapist and my friends just keep reminding me, it’s my story, it’s my truth, and it’s my experience. I’m trying to keep that in the front of my mind and stay grounded in that.”

Burke, who has written in various professional capacities before and recently co-edited a book with Brené Brown, admits that she was unsure how much she should include. “I struggled with stuff—some of my family dynamics,” she says. “I think it was important to talk about how I got to be who I am, but it was certainly hard. It’s one thing to have a conversation with your people. It’s another thing to do that in public! It felt good to be able to tell this truth finally, but it was hard, because I knew that it would affect those relationships. I tried to be really discerning. I’m not telling a story just to tell it. If I’m telling a story, it’s because it lends itself to the bigger story.”

Like Angelou, Burke can see herself writing multiple memoirs. “A lot of stories for Black girls are about the ‘special snowflakes,’ and you’re made to believe you have to be so different or special to matter. I want all Black girls to feel special—every one of them. We all have our thing. My story is both ordinary and extraordinary. People need to know that there are a lot of other Tarana Burkes out there.”

She hopes her work can do for others what Angelou’s did for her—make them feel seen. “I could take that same time period in this book—which is from my childhood through my mid 30s, essentially—and tell a whole different story. I’m looking forward to that. My work has always been around racial injustice and sexual violence. But I think there’s a bigger thing to talk about, which is just the human condition. Part of my dream for myself [as a writer] has always been to find a way to talk about sexual violence with young Black girls. How can I get our community to understand how an R. Kelly is possible?”

Burke was first drawn to organizing by close-to-home events like the murder of Brooklyn teen Yusef Hawkins by a white mob, and the arrest of five now-exonerated Black and Latino boys from Harlem accused in a brutal assault on a jogger in Central Park. After graduating from Auburn University in Alabama, Burke relocated to Selma where she worked for an organization that taught leadership skills to youth. While still based in Selma, she founded Just Be Inc., an organization primarily focused on providing various resources to Black and Brown girls. In 2006, she began the “me too” campaign aimed at encouraging empathy and forming community for sexual assault survivors. 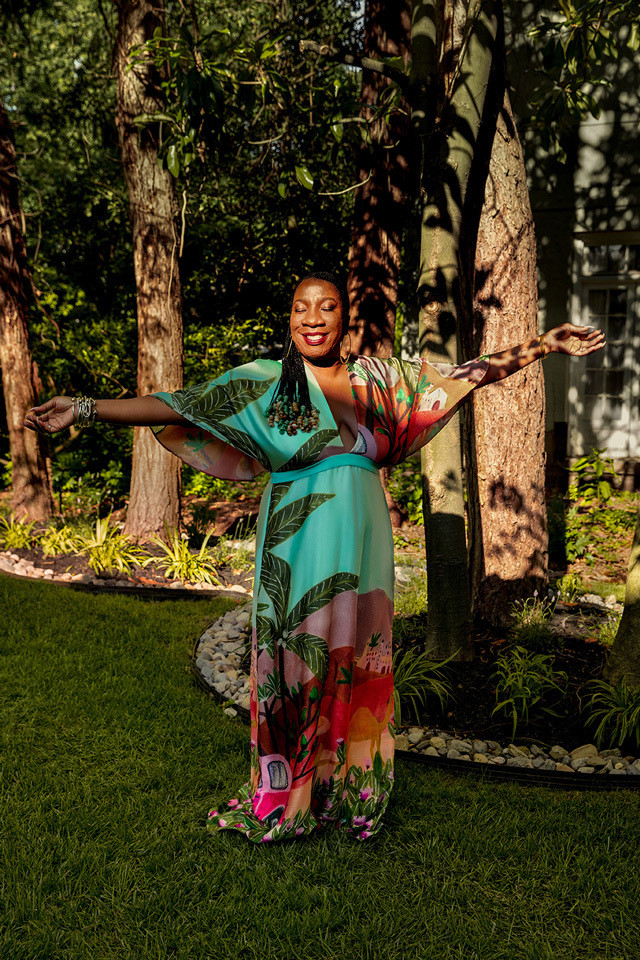 A point of frustration for Burke has been the ghettoization of Black women’s issues and the pigeonholing of her work. “I’m a Black woman, our organization is led by Black women and femmes, and we are always talking about Black, Black, Black, Black, Black—still, people do not look at ‘me too’ the organization, as a Black organization,” notes Burke. “When there was all of this racial reckoning talk last year in 2020, I was talking on social media and I had these people hopping in my comments and in my inbox, saying, ‘This is not a time to talk about “me too.” This has nothing to do with “me too.”’ You know, basically telling me to stay in my lane.”

“I have this conversation quite a bit,” continues Burke. “You don’t see Black women being called as experts on Blackness and Black life. There are very few of us who are seen as general experts. If you talk about Black women’s issues, it doesn’t get lumped into the larger conversation about Black life. And it’s not part of the general conversation about women’s issues—it just gets completely siloed. When you say, ‘Black Lives Matter,’ if what you really mean is Black men’s lives matter, just say that.”

At 47, with her braids, hoop earrings, and bangles that jingle when she uses her hands to emphasize her points, Burke evokes the “Around the Way Girl” aesthetic popularized when she was a teen. She’s warm and funny and skeptical of the ways in which movements can be off-putting for everyday folks. “There’s a little bit of a funky elitism with the language we use,” she says of working in activism, “and the idea that you have to talk a certain way—say all the right words or whatever.”

“I’ve had insecurities my whole life because, like Cardi says, I’m a regular, degular, schmegular girl from the Bronx,” says Burke. “And I got anger issues, ‘cause I was abused. And I’m working through that, and I’m not gonna fake this for y’all.”

twitter.com/sabrinaford
Tags: Tarana Burke , Tarana Burke's unbound , #metoo , #metoo founder , unbound memoir.
Support Feminist Media!
During these troubling political times, independent feminist media is more vital than ever. If our bold, uncensored reporting on women’s issues is important to you, please consider making a donation of $5, $25, $50, or whatever you can afford, to protect and sustain BUST.com.
Thanks so much—we can’t spell BUST without U.