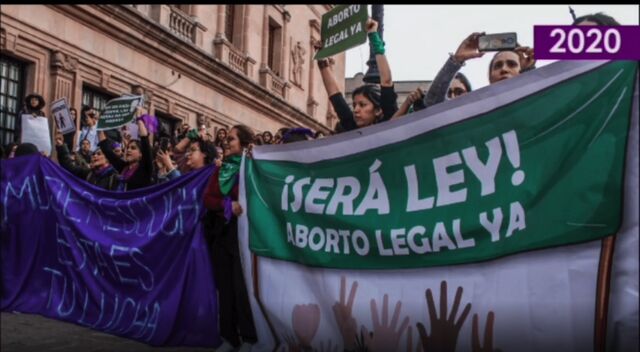 On Tuesday, Sept 7, Mexico’s Supreme Court set a precedent that could lead to the legalization of abortion procedures in this predominantly Catholic country. The court made a unanimous ruling that penalizing abortions is unconstitutional, thus decriminalizing abortion procedures across the country. Up until now, many Mexican states could mandate jailtime for people who got abortions, and the ruling, which many hope will legalize abortions in the near future, follows years of public demands for greater rights and protections by a prominent Mexican women’s movement, Frente Feminista Saltillo.

The ruling could make abortion procedures available on request to any person up to twelve weeks into a pregnancy in Mexico City and in the states of Oaxaca, Hidalgo and Veracruz. After the judges’ votes were announced, Chief Justice Arturo Zaldivar stated: “Today is a historic day for the rights of all women. It is a watershed in the history of the rights of all women, especially the most vulnerable.”

However, the ruling only sets a precedent, meaning that judges in each state will no longer be able to prosecute any person who terminates their unborn child without violating the determination made by the court, and without violating the constitution. But while the ruling itself doesn’t automatically legalize abortion in Mexico, activists are said to be planning to use the ruling to challenge the laws across Mexico that currently allow for the imprisonment of people who have abortions, as well as challenging other criminal offenses associated with the procedure.

Furthermore, people can now sue the state to have these sorts of charges dropped, and one Mexican state governor announced on Wednesday that he will release all people imprisoned for terminating their pregnancies. Unfortunately, this statement rings hollow, because Mexicans aren’t actually found guilty of “abortion” and imprisoned, but rather are charged with homicide.

The ruling will, however, benefit millions of people, making Mexico the most populous Latin American country to legalize abortion. While the decision was welcomed by feminist activists, it wasn’t so joyfully accepted by everyone—some conservative politicians and the Catholic Church were less than pleased. Check out this tweet from the Episcopal Conference of Mexico:

Translation: "Those of us who are convinced of the value of life have no need for a murderous law like the one they are passing; We hope that your choice for life is not determined by an ideology, but is motivated by faith, hope and love. #Yes to life"

Following the recent ban on abortions in Texas, the hope is that other American states will take inspiration from Mexico and listen to female voices demanding abortion rights. Argentina legalized abortions last year, and the same was done in Mexico City in 2007. The green handkerchiefs as seen in the photo above have been used nationally in women’s protests across Southern American states in favour of abortion rights.