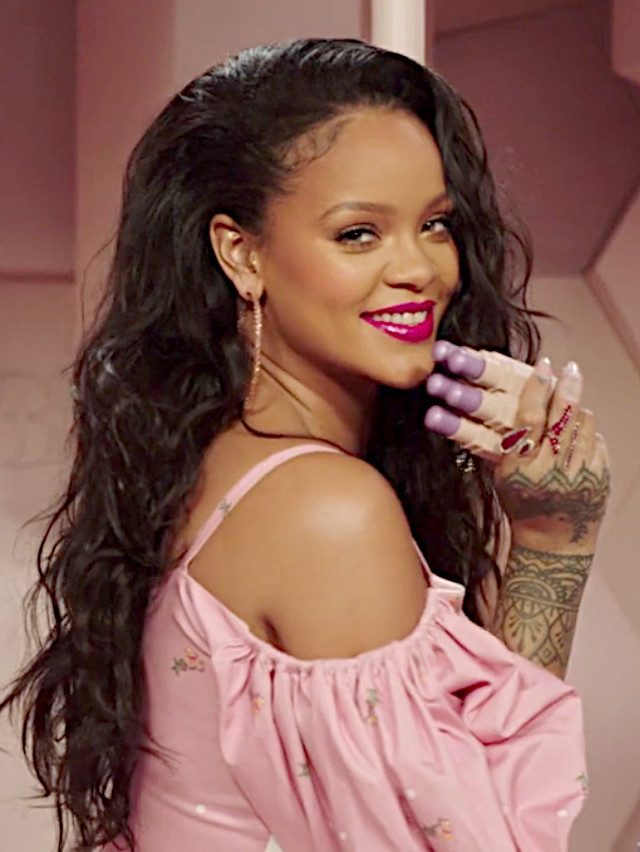 Rihanna’s latest Savage X Fenty collection is out, and the music mogul and recent billionaire has enlisted a group of fierce, curvy Black women to model the 100+ piece collection. The Caramel Curves are an all Black-female motorcycle crew based in New Orleans, Louisiana, and are front and center in this latest campaign. No stranger to shimmer and spectacle, the cyclists often show up to their events and weekly rides in leather, heels, and rhinestoned ensembles. Speaking to British Vogue about why she chose the NOLA biker babes, the  multi-hyphenate superstar explained, ““The Caramel Curves show the world what being a badass boss is all about while bringing sexiness along for the ride.”

Wanna know more about this group of  small business owners, mothers, and community members? Check out our 2015 feature on them below. 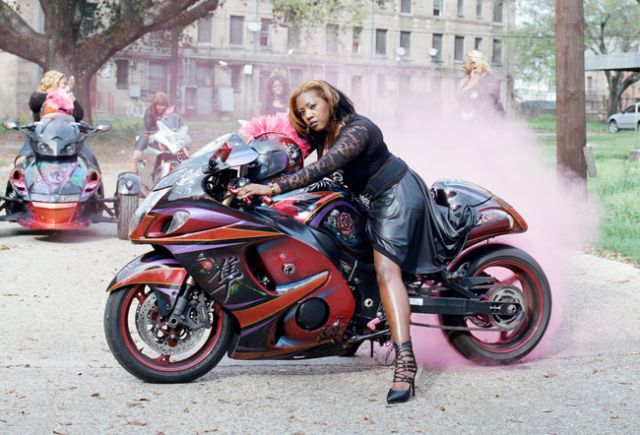 Hanika Beatty grips the bike. The waterfall hem of her black leather skirt drapes gracefully over the seat as her feet—encased in lace-up stilettos—work the concrete. She squeezes the front wheel brake and the back tire spins madly. Her bike seems to levitate, humming and hovering in place, until a burst of pink smoke erupts from the back end and wafts over the busted-up remains of New Orleans’ Magnolia housing projects. A crowd gathers. “Y’all really riding a bike with heels on?” someone asks. One guy clutches a Styrofoam daiquiri cup, another kicks through the weeds to take pictures. Two little boys holding baggies of Fiery Cheetos gaze, entranced, at this badass apparition.

It’s not the only time the Caramel Curves—New Orleans’ first all-women’s motorcycle club—have been interrupted today, and it won’t be the last. When I met up with the gang a few blocks over, at a Central City gas station, the Curves created an instant party. With their hot pink Mohawk-helmets, stabby stilettos, and custom-painted motorcycles, these ladies possess a Siren-like allure. Trucks honked. A car stereo cranked louder. One guy—hitting on Daria “Candi” Green—took off his shirt in an attempt to impress. (“I thought he was going to give us a strip show. I was going to get my dollars,” Nakosha “Coco” Smith snickered.)

“It never fails,” Green says of the attention. “We’ve been doing this so long, you’d think they’d be used to it.” It’s been a decade since the Curves first rumbled to life, but after Hurricane Katrina scattered its membership, Carolyn “Caramel” Sterling, Smith, Beatty aka “Tru”, and Shalonda “Baby Girl” Lewis worked together to get the group up and running again. 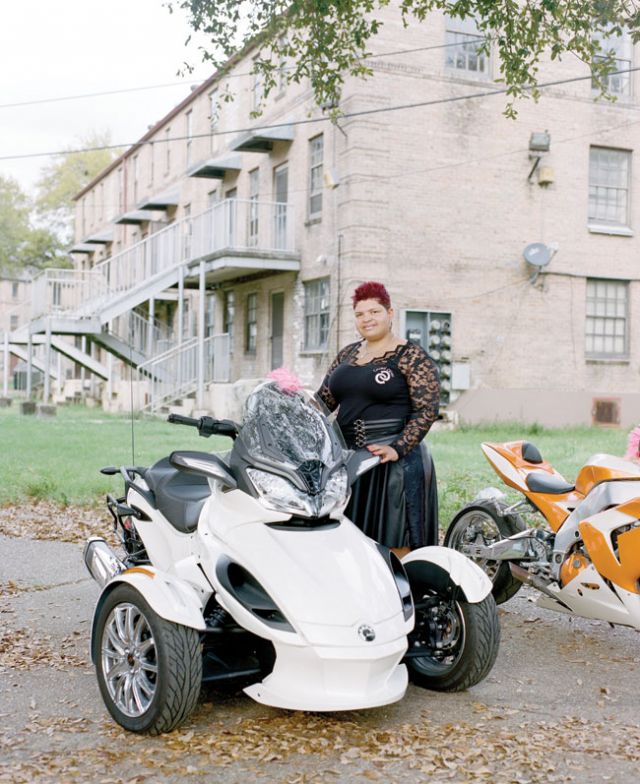 Now 20-women strong, the Curves bring together a vibrant cross-section of interests and personalities. Beatty is a Doctor of Pharmacy. Smith owns a nail salon. Dezell “Foxy” Bell is a mortician. Andrea “Hood Priss” Shepherd is an RN. Sterling is a baker and a barber. Green is a medical clerk. But when they’re together, they leave their differences behind and enjoy a camaraderie like no other. “This really is a sisterhood,” says Shepherd. “I think everybody can see that.”

For many of the Curves, female companionship on the bike wasn’t always an option. “We learned how to ride from guys,” says Green. “There were no girls around to learn from.” 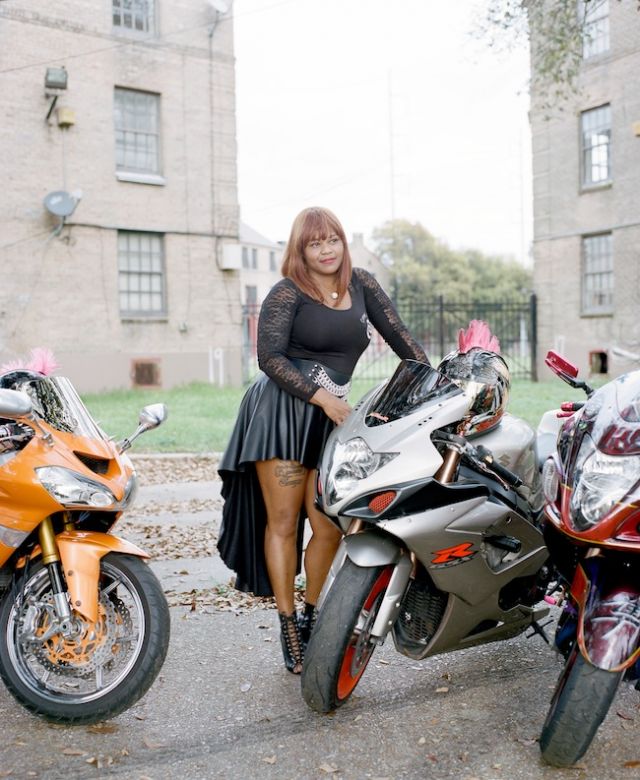 When Smith first got on a motorcycle at 16, it was at the urging of her boyfriend. “He said, ‘I think you would look so hot on a motorbike,’” she says. But pretty soon, he got nervous—maybe because she turned out to be a daredevil.

Beatty’s inspiration was her father. As a girl, she remembers staring at his motorcycle in the garage. “I was always like, ‘Dad, why don’t you crank it up?’ He said he saw too many people get injured, so he gave it up for his family’s sake.” At first, he discouraged her from getting a bike, but when she did, he quickly changed his attitude. “He’s one of my biggest fans,” she says. 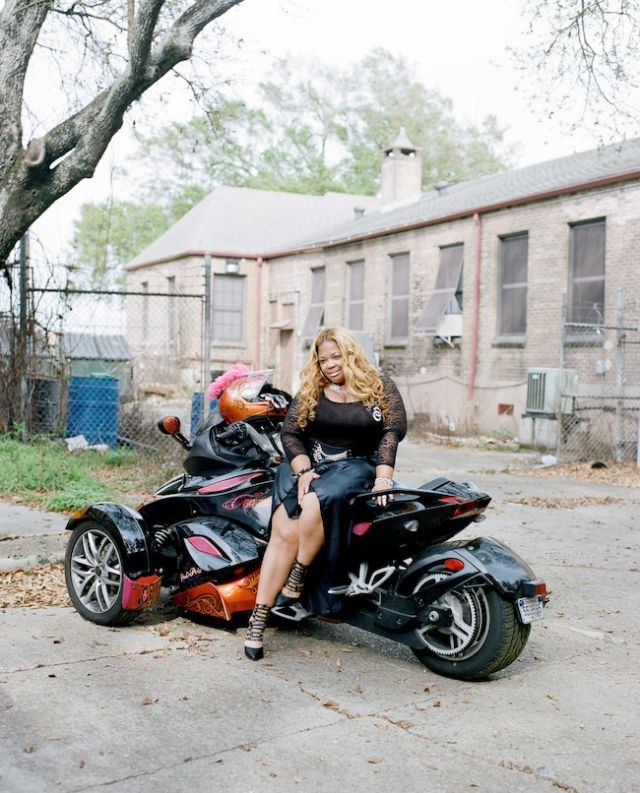 Gender differences aside, other divisions persist in the bike world, even among women riders. Race is one such line. “It’s sad that it’s like this, but our communities are separated,” says Beatty of women’s motorcycle groups. “It’s tough for a girl already in this man’s world, but we’re also segregated between black and white. We try to do things together, but it doesn’t always happen that way.”

To become a Curve, prospects must own their own bikes and be financially able to pay dues and participate in events; they also have to fit personality-wise with the group. “We look for loyal people,” says Beatty. “People who are dedicated to the club.” 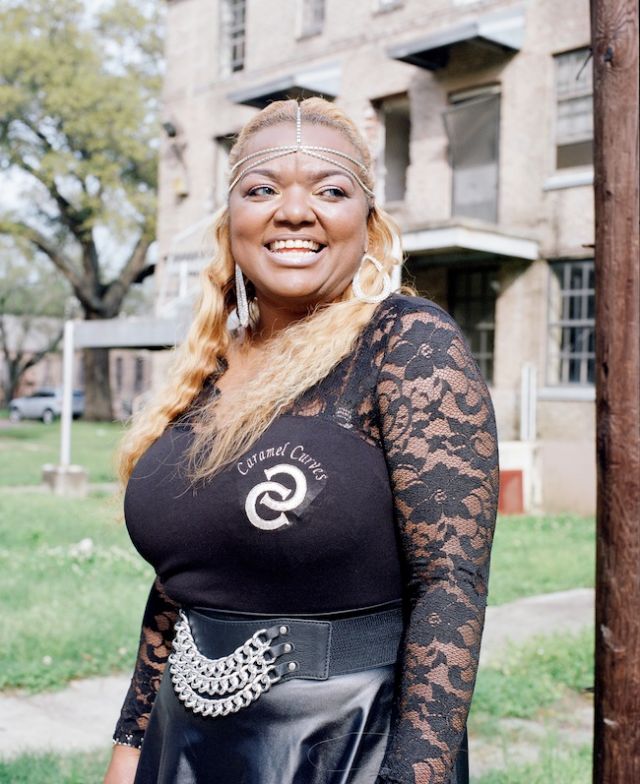 Road trips, national bike events, and parties are all features of Curve membership, but their Sunday rides are the organization’s central event. Sometimes they tool around town, sometimes they ride one or two hours outside of New Orleans, and sometimes they head out early in the morning and stay out till the sun goes down. “Having a club means I always have somebody to ride with,” says Smith. She also enjoys being part of the spectacle. “I like everybody going, ‘Look at those bad bitches who just pulled up on bikes.’”

Like the women themselves, the Curves’ riding styles differ. “All of us can zoom our bikes around and burn that tire up,” says Beatty. (The secret to their coveted pink smoke is the Shinko Smoke Bomb rear tire, which produces the effect during burnout.) Some women, like Smith, who pops a wicked wheelie, love to do tricks. Others prefer both wheels on the ground. 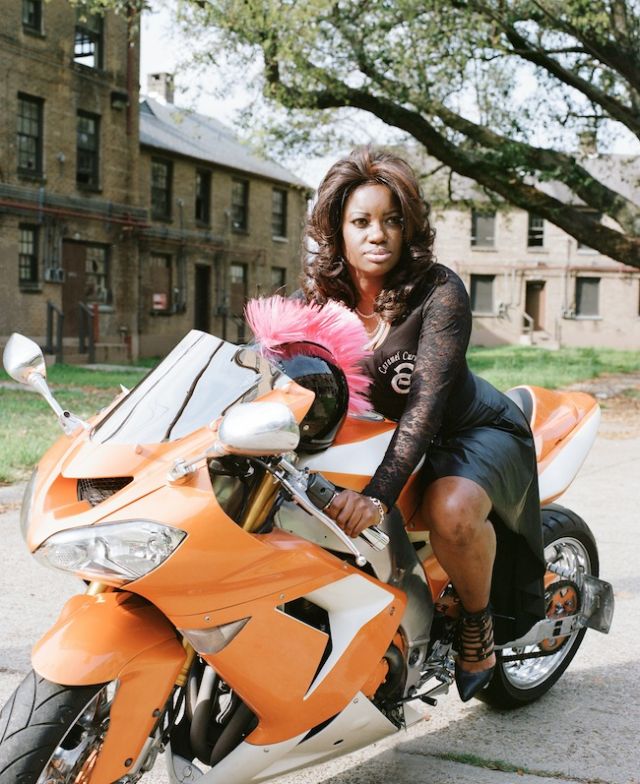 Stunters or not, the possibility of getting hurt is real, and it’s never far from members’ minds. All the Curves know people who’ve been seriously injured or killed in motorcycle accidents, and many have been hurt themselves. Sterling’s accident—she hit rocks that fell off a dump truck—kept her from riding for a year. And yet, she says, “I don’t think there’s anything outside of death that could make me stop.”

“Riding helps me live life better,” says Sterling. “If you don’t know when your number’s up, you might as well live today to the fullest. And why not do it on two wheels—in heels?”

This story originally appeared in the June/July 2015 Issue of BUST Magazine. Subscribe today!