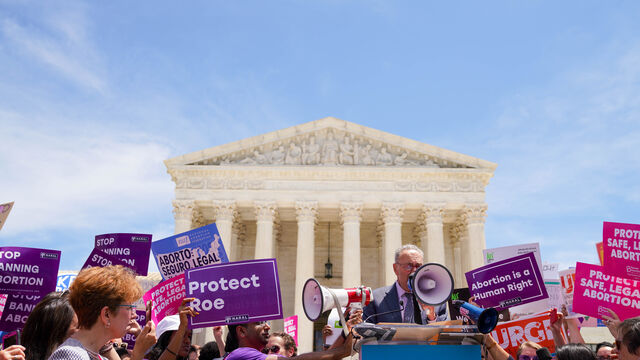 With the specter of a 6-3 conservative majority on the Supreme Court in front of them, Republicans have increasingly become more brazen in their pushes to overturn Roe v Wade.

This Thursday, 228 Republican members of Congress (184 from the House and 44 from the Senate) asked the Supreme Court to overturn Roe v. Wade and stop their “vise grip on abortion politics”. The request was included as part of an amicus curiae (or “friend of the court” briefing in which a third party writes the court about a particular case at hand) for the state of Mississippi’s recently filed Supreme Court case.

Congressional Republicans were referencing a case recently filed in defense of a Mississippi law that banned abortions after 15 weeks with no exceptions for rape or incest: in direct violation of Roe v. Wade’s legalization of abortions prior to the point of viability (believed by experts to be at about 24 weeks into pregnancy). The law was first passed in Mississippi in 2018 before being blocked by two federal courts. In one such decision, judges on the 5th US Circuit Court of Appeals affirmed the legal precedent, set by Roe and affirmed by 1992’s Planned Parenthood v. Casey, that abortion is an absolute right before the point of viability. They then held that “states may regulate abortion procedures prior to viability so long as they do not ban abortions,” and concluding that “the law at issue is a ban.”

Mississippi Attorney General Lynn Fitch argued in a brief filed to the court last Thursday that the point of viability should no longer be used as a metric for where states can and cannot regulate abortion, saying modern medicine has “undercut that line.” She also called the argument for overturning Roe “overwhelming”.

The Supreme Court’s decision to take up the case last spring was met with fear from abortion advocates who saw the once looming threat of conservative action against Roe as becoming an actuality.

These two developments: both the Mississippi case itself and the Republican response to it represent one of the first times Republicans and especially their legal teams have been so publicly and blatantly open about their desire to see Roe v. Wade overturned. Previous legal attempts by conservatives have been aimed at picking around the edges of Roe v. Wade’s legal coverage in the hopes of slowly but surely eroding practical access to abortion around the country.

Fitch’s recent comments even contradict previous statements she’s made to the court about the purpose and intent of Mississippi’s filing. In the petition filed in June 2020 asking the court to take up the case, Finch wrote, “the questions presented in this petition do not require the court to overturn Roe or Casey.”

Now, however, on the back of Justice Ruth Bader Ginsburg’s death and the appointment of Republican Amy Coney Barrett, conservatives seem to be seeing an increasingly great opportunity to overturn Roe, and are getting bolder about asking for what they have really wanted all along.

Tags: abortion , republicans , Roe , Roe v. Wade , supreme court , pro-choice , pro-life
Support Feminist Media!
During these troubling political times, independent feminist media is more vital than ever. If our bold, uncensored reporting on women’s issues is important to you, please consider making a donation of $5, $25, $50, or whatever you can afford, to protect and sustain BUST.com.
Thanks so much—we can’t spell BUST without U.