The testimony of one woman in the report, Lee Ye-Rin, highlights the largely undetectable nature of these offences, Ye-Rin first described how her married boss, whose advances she had previously rebuffed, gave her a small clock as a gift. She put this clock in her bedroom, but after some time moved it to another room. When she came to work the next day, her boss told her that “if she didn’t want the clock, he would take it back.” This roused her suspicion, and she googled the clock; discovering that it was in fact a spy-cam which was able to record perfectly in the dark. Lee Ye-Rin’s boss had been streaming footage of her from inside her own bedroom directly to his phone 24 hours a day, for the previous month and a half.

The HRW also revealed the sharp increase in digital sex crimes in the last decade: “In 2008, less than 4 percent of sex crimes prosecutions in South Korea involved illegal filming; by 2017 the number of these cases had increased eleven-fold, from 585 cases to 6,615, and they constituted 20 percent of sex crimes prosecutions.” Women interviewed for the report expressed feeling too afraid to use public bathrooms and changing rooms because these spy-cams are often sold in the form of inconspicuous or everyday items.

Another case in the report described a woman who committed suicide after a male co-worker filmed her without her knowledge in their workplace’s changing rooms. The mental toll such an insidious invasion of privacy has on survivors fails to be appreciated by the authorities who handle them. Lee Ye-Rin described the ongoing turmoil she has experienced in the aftermath of her experience, “I cried all night, I couldn’t sleep, I had to take medicine to soothe myself…Even now this happens,” she said. “What happened took place in my own room—so sometimes, in regular life, in my own room, I feel terrified without reason.”

This phenomenon represents more than just a seedy side-effect of technological advancement. Symptoms of deeply engrained gender inequity can be found in many aspects of life in South Korea, including its most successful and public export: K-pop. In recent years groups such as Blackpink and BTS have exploded onto the American music scene, thanks largely to the bombastic, genre-bending and almost utopian production and visuals. Yet the uniform perfection that characterises K-pop hints at the questionable measures taken to produce the dazzling veneer.

The Korean music industry is unique in that it is comprised of companies which pluck children based primarily on attractiveness and talent. They then undergo intense training for several years; not only in dancing and singing but also in how to appear faultlessly charming, moulding them into ‘idols’. By the time they debut as musical artists, idols will have signed a contract that binds them to the will of their company, and in turn to that of their fans, whose sustained adulation fuels company revenue. Though this system also affects male idols, the industry subscribes aggressively to the male gaze, manufacturing their female idols as demure porcelain dolls. 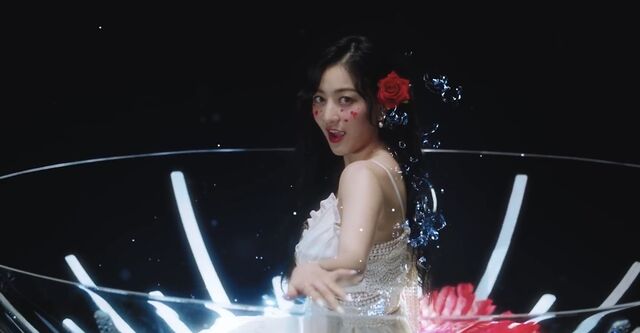 Companies tend to use a very specific formula for female idols: sexual suggestiveness offset by a childlike innocence, not dissimilar to that which launched an underage Britney Spears into the stratosphere of superstardom and scrutiny.  This image often carries over into their personal lives; companies forbid dating to maintain the illusion of fantasy girlfriend to male fans, while personal beliefs and political values should not be discussed. When a member of one of K-pop’s most famous female groups, Red Velvet, mentioned that she had read Cho Nam Joo’s Kim Ji Young, Born 1982, she received a torrent of online vitriol from male fans, for suggesting that she was a feminist. Ironically, this novel focuses on a South Korean Everywoman, who finds herself repeatedly ground down by micro-aggressions and the restricted prospects of women throughout her life.

Sulli, member of another high-profile girl group, f(x), was uniquely outspoken about issues pertaining to gender inequality. She received constant online backlash, particularly when she posted an Instagram photo in which she wore a top with no bra. In response, Sulli said in an interview: “When I first posted a ‘no bra’ photo, there was a lot of talk about it. I was scared and could have hidden, but the reason I didn’t is that I want to change peoples’ prejudices about that. Part of me also wanted to say, ‘This isn’t that big of a deal.'” Despite her defiance, Sulli took her own life at the age of 25 in 2019, it is believed at least partly due to the toll the abuse took on her mental health.

The media’s willing exhibition of women’s’ bodies rests on an unspoken rule that they do not demonstrate any agency over their own sexuality. This perhaps contributes to the allure of covert voyeurism that seeps into everyday life.

What also ties these cases together is a startling lack of action taken by police and authority figures. Prior to her death, Sulli had gone to her company SM for help, one of the most powerful and well known in South Korea, but little was done. When women report digital sex crimes, the HRW described how police often meet them with disbelief and even accusations of lying. If a case is taken to trial, more often than not punishments are light:  “In 2020, 79% of those convicted of capturing non-consensual intimate images received only a suspended sentence, a fine, or a combination of the two.”

2019’s Burning Sun Scandal, perhaps the most infamous instance of molka in recent years, unearthed networks of prostitution in Burning Sun nightclub, located in Seoul’s affluent Gangnam district, as well as chatrooms in which high-profile celebrities shared illegally captured videos of themselves having sex and bragged about raping women. During the investigation a senior police officer was arrested for attempting to cover up the crimes, after being bribed by several of the male celebrities involved.

Despite the government’s promise to handle the situation more head on, the HRW concluded that true progress can only be made with a greater sense of empathy for women in every respect. This could be accomplished via a more thorough education of consensual sex for children and adults alike, as well as an increase of women in police and court roles.