This Queer Valedictorian Almost Had His Speech Censored By His High School, But The Audience Was Not Having It 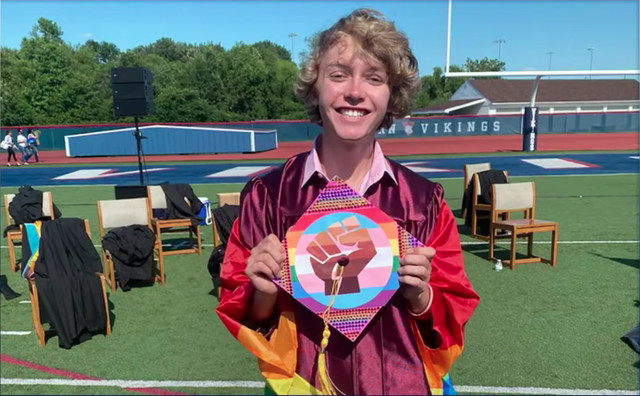 You’d think society would have evolved past this by now, but apparently high school principals will always be symbolic stand-ins for the oppressive hand of authority.

Robert Tull, principal of New Jersey’s Eastern Regional Camden County High School, decided to really drive home the stereotype on June 17th when he attempted to cut short the valedictorian speech of Bryce Dershem, who wanted to share his experience as a queer teenager.

Dershem began his speech with the usual pleasantries and congratulations before becoming more vulnerable with the audience. “After I came out as queer, I felt so alone,” he said. Just as the valedictorian admits that he “didn't know who to turn to,” the principal approaches the podium and begins to unplug Dershem’s mic. Principal Tull then points to the preapproved speech and tells Dershem to read from that, before grabbing Dershem’s apparently unauthorized speech. Clad in a rainbow flag and red graduation robes, Dershem quietly stands to the side as the principal pulls the mic from its stand before leaving with it in hand.

This seems like it’s where the story ends, with Bryce Dershem taking his seat, followed by a ton of lawsuits and lost moments. Luckily, the audience was not having that.

Teachers, students, and parents all began to chant “let him speak” until someone approached the podium in order to replace Dershem’s microphone. Dershem was then able to recite his planned speech from memory, discussing his struggles with being queer-identifying, formerly anorexic, as well as formerly suicidal. The speech was deeply personal and urged those listening to take mental health seriously, believe in themselves, and support one another.

After actually being able to hear the speech in full, it makes me wonder what made this speech so worth censoring. All Bryce Dershem did was voice the realities of his life and those of so many other people his age. Teenagers are queer. They deal with eating disorders and accepting their bodies. They have issues with their mental health. But according to Dershem, when seeking pre-approval for his speech, administrators told him that his queerness and mental health problems weren’t “relatable” to the rest of the students at his school. An administrator even went as far as to instruct him to write a speech instead of a “therapy session.” I don’t know if they’ve been paying attention, but Gen Z is in desperate need of a therapy session.

Dershem seems to have delivered one hell of a therapy session, because the attempts at censoring him have actually had the opposite effect. Since June 17th, the day of his graduation, he has been brought to discuss the ordeal on Good Morning America, as well as having been commended by Phil Murphy, governor of New Jersey, for his "resilience and courage."

The way that this has been received and handled is certainly indicative of the changing times and some pretty great proof that we must deny people the power to silence others. Literally.

Olympian Activist Gwendolyn Berry Turns Her Back During National Anthem: "The Anthem Doesn't Speak For Me. It Never Has."

Tags: Bryce Dershem , Eastern Regional Camden County High School , LGBTQIA , queer speech , mental health
Support Feminist Media!
During these troubling political times, independent feminist media is more vital than ever. If our bold, uncensored reporting on women’s issues is important to you, please consider making a donation of $5, $25, $50, or whatever you can afford, to protect and sustain BUST.com.
Thanks so much—we can’t spell BUST without U.