Details
BY Melody Heald
IN Feminism
Published: 19 May 2021 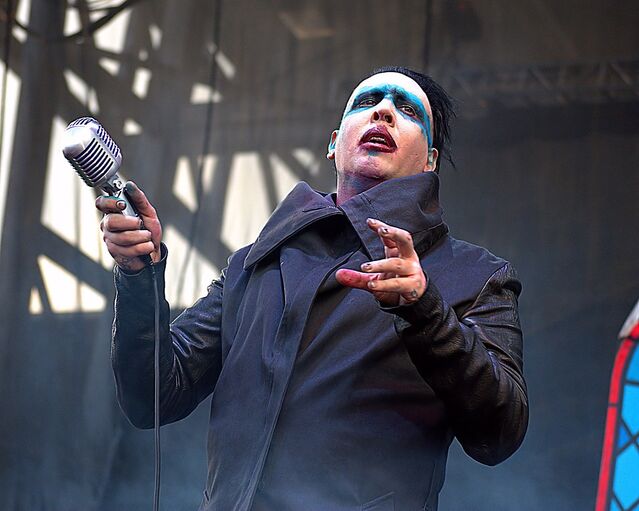 Last week, Ashley Morgan Smithline opened up about her abuse with singer Marilyn Manson. Smithline confessed in her People Magazine interview that she “survived a monster,” and “I thought he was going to kill me.” Since her interview, women who were associated with Manson have spoken out, claiming similar abuse. Some of these women include Evan Rachel Wood, Esme Bianco, and Ashley Walters. Since then, about fifteen women have claimed abuse and filed lawsuits.

During her People Magazine interview, Smithline, 36, revealed detailed horror stories about her relationship with Manson, 52. The couple dated on and off for two years, from 2010 to 2012. During that time, Smithline allegedly endured physical, sexual, emotional, and psychological abuse.

In the beginning of their relationship, Smithline was mesmerized by Manson’s “brilliance and intelligence,” and “endless conversations about favorite movies and favorite books,” Smithline told People. Believing she found “Mr. Right,” she says she was lured in by Manson’s warm persona only to find out he had a dark side.

The honeymoon phase only lasted for a few days before Manson’s true colors started to show. Manson allegedly tortured Smithline many times by biting, whipping, and cutting her with a swastika knife, and shoving his fist in her mouth during sex, People Magazine reported. In addition, Manson allegedly forced Smithline to do a blood pact, forcing her to drink his blood and vice versa. Smithline also claimed that he forced her into a glass, sound-proof room he called “The Bad Girls Room,” where he would lock her in there for hours at a time whenever she “pissed him off.”

Smithline attempted to leave Manson during the first year of their relationship, but was unable to stay away for long. Over the course of a year, the abuse only escalated. Manson allegedly raped Smithline in her sleep and deprived her of food and sleep, where she dropped down to 80 pounds, and carved his initials “M.M.” into her thigh, according to Smithline. It was when Manson broke her nose before a modeling gig in Japan and landed her in the hospital that she had a wake-up call. Manson never reached out to her in the hospital. She made her escape from Manson by reaching out to a friend who lived near him.

Past girlfriends and women associated with Manson have recently come forward, revealing that they experienced similar things. Manson’s ex fiancee, Evan Rachel Wood, 33, alleged that Manson had horrifically abused and manipulated her during their three-year relationship, Buzzfeed reported. The pair started dating when Wood turned 18 in 2007; Manson was 36 at the time.

“He started grooming me as a teenager. I was brainwashed and manipulated into submission,” Vanity Fair wrote. In 2018, Wood spoke out against the abuse to the Judiciary House Committee as an attempt to have a Sexual Assault Survivors’ Bill of Rights passed in all 50 states. Wood says he attempted to kill her, severely gaslighted and brainwashed her, even raped her and chased her with an axe. She says she was also locked into the soundproof room whenever she angered Manson. In 2009, Manson confessed that he had “fantasies about smashing her [Wood's] skull with a sledgehammer,” Vanity Fair wrote.

Furthermore, Game of Thrones actor Esme Bianco, 38, came out against Manson’s abuse and filed a lawsuit. The British actor claimed Manson coerced her with “drugs, force, and threats of force,” BBC reported. The two met in 2005, and in February of 2009, he flew Bianco out to the U.S. by allegedly baiting her into thinking she was going to star in a film. When she arrived, she was expected to stay in Manson’s home, where there was no film crew, and where she says she was deprived of food and sleep.

During her four-day stay, Bianco says she was locked in a bedroom, tied to a prayer kneeler, and was beaten by a whip, then was electrocuted, BBC reported. Unfortunately, the abuse continued for two more years where Manson would allegedly force Bianco into violent and degrading intercourse; she says this would sometimes occur when she was sleeping. In addition to the abuse, Bianco claimed Manson violated U.S. human trafficking laws by withholding her visa. The two broke up in 2011.

In the midst of allegations, former assistant of Manson, Ashley Walters, quit being his assistant. In addition, she is now suing Manson for sexual assault, harassment, and battery, Rolling Stone reported. The 37 year old was also psychologically and physically abused to the point of feeling like his property, People wrote.

The two met when Walters was aspiring to be a photographer in 2010. Manson approached Walters and suggested they should work together. Two months after they met, Manson invited Walters to his apartment to take photos. The photoshoot went awry, with Manson allegedly pushing Walters to undress. According to the lawsuit, Manson “pinned her to the bed, where he tried to kiss her and then bit her, and forced his hand into her underwear.”

Manson denies all of the claims, stating they’re “horrible distortions of reality.” He took to Instagram where he said in a post: "My intimate relationships have always been consensual with like-minded partners. Regardless of how — and why — others are now choosing to misrepresent the past, that is the truth."

Since then, Manson has been dropped by his record label, Loma Vista, and his life-long manager and booking agent have quit. His appearances in TV shows American Gods and Creepshow were cut, Rolling Stone reported.

Manson and his wife, Lindsay Usich, have reportedly attempted to dox an Instagram page called @Mansonisabusive that's dedicated to exposing Manson’s abuse. Laura, the woman who runs the page, was threatened and blocked by Manson and Usich. Laura claimed Manson and Usisch created multiple Instagram pages to threaten Manson's accusers, but hasn’t been confirmed.

To this day, all of the women who have come forward claim to suffer from PTSD and depression because of Manson’s alleged abuse.

I Am A Victim Of Sexual Coercion, Abuse, Stalking, And Harassment. This Is My Story.

Lend A Socially Distanced Hand To These Worthy Causes

FKA Twigs Sues Shia LaBeouf For Abusive Behavior, And The Internet Has Something To Say About It