Journalist Brooke Baldwin Leaves CNN Better Than She Found It 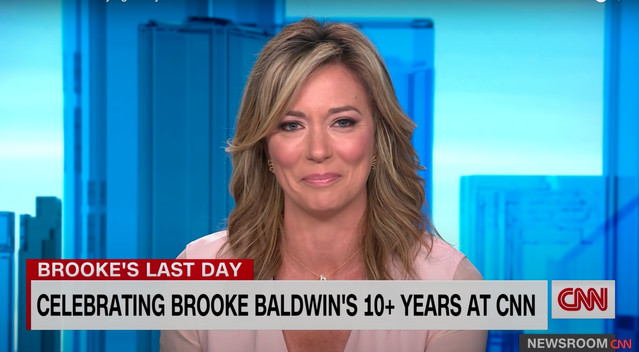 Journalist Brooke Baldwin stepped down from her role as CNN news anchor on April 16. She worked for the network for 13 years, beginning in 2008, and hosted the daily daytime news program CNN Newsroom for nearly 11 of those years.

Baldwin first announced she would be leaving the network on the February 16 edition of CNN Newsroom. “After most of my twenties working my way up in local news, I came to this network in 2008, in the midst of the Great Recession, as a freelancer,” she said. “I remember I scribbled my name on a Post-It note and stuck it outside of this temporary office, determined to fulfill my dream of becoming a full-time CNN correspondent… I would not only go on to fulfill that dream, I would flourish in this environment and land my own two-hour show in the afternoon at the age of 31.”

The news of Baldwin’s departure came after her two-hour hosting slot was cut down to one hour and she was notably absent from some of the 2020 election coverage, which she noted was “not [her] choice.” Still, many wondered why she was stepping down from what appeared to be a secure and lucrative career. “There is just more I need to do,” Baldwin said during her February 16 announcement. “And, yep, we are still in a pandemic, and nope, I don't have a job I'm jumping right into, and yes, I'm feeling very vulnerable. But what is it Brené Brown says? 'Vulnerability is the birthplace of innovation, creativity and change.' And I am so excited about what is to come."

On April 16, her final day on air, Baldwin gave her emotional farewell remarks. She recalled how she was originally asked to step in as host of Newsroom “to keep the seat warm just for a week” while the official host was selected. Of course, she went on to hold the seat for over a decade. “I am a journalist and a storyteller for life,” she said.

Baldwin spoke proudly of her accomplishment in “leaving this place better than [she] found it,” a quote she borrowed from the U.S. Women’s Soccer League player Megan Rapinoe.

Baldwin had interviewed Rapinoe for her book HUDDLE: How Women Unlock Their Collective Power, which was released on April 6 and has since become a Wall Street Journal bestseller. The book details Baldwin’s concept of “huddling,” or women leaning on each other, in various relationships, fields of work, and forms of recreation. HUDDLE explores areas such as all-girl learning environments, Indigenous women who are working to protect the planet, self-care and trauma healing, and even friendship dynamics through the COVID-19 pandemic.

Baldwin discussed HUDDLE and how it relates to her departure from CNN on episode 105 of BUST’s Poptarts podcast on April 2. “There are several reasons why I am leaving,” she told BUST. “This place has been my home, these people are my family, but I do feel that my role is changing... Through writing the book and interviewing these trailblazing women, I cannot stand and hold space with these women without also being as brave as I possibly can be... It is time for me—as I joked on the Ellen show—to do my backflip off the high dive. I just hope there’s water in the pool.”

Baldwin finished strong as she closed her final episode of Newsroom. “Whatever industry you’re in, my parting words: Get a little uncomfortable. Speak up. And keep pushing,” she said. “I’m Brooke Baldwin here in New York, and I can’t wait to have you join me on our journey together.”

In The Era of Trump and #MeToo, "Bombshell" Rings Hollow