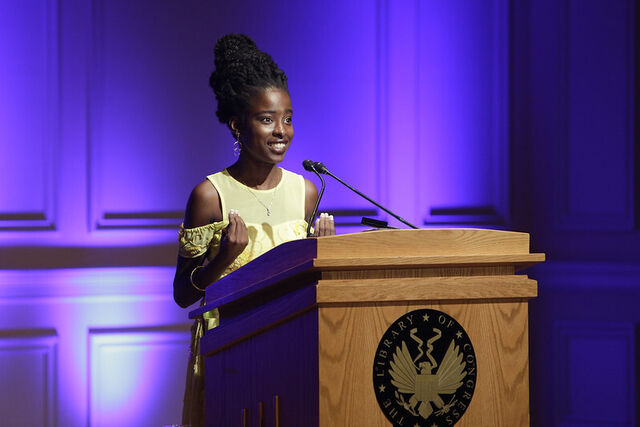 After making history as the youngest poet to grace the inaugural stage in January, Amanda Gorman will become the face for Vogue’s May issue cover. Becoming the first National Youth Poet Laureate in 2017, Gorman’s work as a poet and activist has led her to achieve numerous accolades, such as her 2015 release for The One For Whom Food Is Not Enough, her title as Youth Poet Laureate of Los Angeles, and her organization One Pen One Page. In her detailed interview with Vogue, Gorman describes her journey through grade school and college, commenting on the many struggles and hurdles she had to overcome in order to get to where she is now.

Honored to be the first poet EVER on the cover of @voguemagazine , & what a joy to do so while wearing a Black designer, @virgilabloh . This is called the Rise of Amanda Gorman, but it's truly for all of you, both named & unseen, who lift me up 🕊🦋
Love,
Amanda https://t.co/PFkEzv1kta

“It took so much labor, not only on behalf of me, but also of my family and of my village, to get here.” Gorman tells Vogue. However, Gorman’s work is far from over, as she is currently doing a campaign with IMG Models, a modeling agency known for representing big-name stars such as Selena Gomez and Kate Moss, and has reportedly declined $17 million dollars worth of offers. Gorman explains that she has to “be conscious of taking commissions that speak to her,” and does not want to be seen as just a model. In fact, Vogue writes that Gorman’s plans to become president have influenced her decisions about what she posts to social media. As Gorman’s mother, Joan Wicks, tells Vogue: “That’s why you won’t find any negativity [on her social media]...that might be construed by future pundits as less than savory…"

Regardless, Gorman wants to make sure that she does not portray a false image to the public eye. As written by Doreen St. Félix in the Vogue interview, “Gorman is becoming increasingly careful of situations that would make her seem like a token." And as Gorman states herself, “I don’t want it to be something that becomes a cage, where to be a successful Black girl, you have to be Amanda Gorman and go to Harvard. I want someone to eventually disrupt the model I have established."

You can read the full interview on vogue.com.

Tags: Amanda Gorman , Vogue , Poet , Amanda Gorman Vogue Cover , The One For Whom Food Is Not Enough , One Pen One Page
Support Feminist Media!
During these troubling political times, independent feminist media is more vital than ever. If our bold, uncensored reporting on women’s issues is important to you, please consider making a donation of $5, $25, $50, or whatever you can afford, to protect and sustain BUST.com.
Thanks so much—we can’t spell BUST without U.