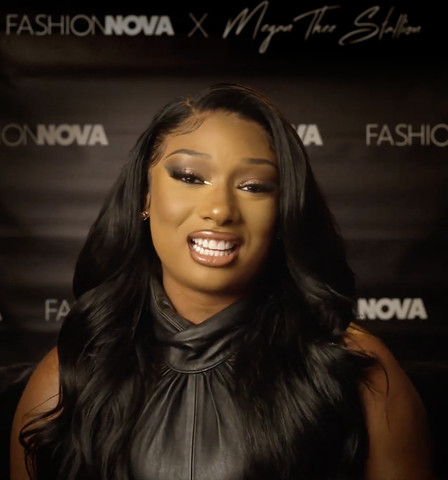 With women’s history month in full effect, congratulations are in order for all of the recipients of Fashion Nova Cares’ “Women On Top” fund. On International Women’s Day, Grammy Award-winning rapper Megan Thee Stallion took to social media to announce that, in collaboration with mega retail company Fashion Nova, this new women’s empowerment initiative would be giving away $1 million worth of donations, grants, and scholarship money to women-focused businesses, entrepreneurs, students, and charities all month long. Recipients, who have been awarded up to $25,000 each, hail from varying racial and ethnic backgrounds, fields of work or study, and geographical locations.

More specific to the fashion industry is the initiative’s recognition of independent designers who Fashion Nova says “inspire us with their creativity and style.” As of yet, all four of the awarded designers are young, innovative Black women who have established their own clothing brands and have styled some of Hollywood’s most notable celebrities. Maxie J. founded Ellae Lisque, an elegant clothing line dedicated to making women feel confident and sexy. Timeekah Murphy’s brand Alani Taylor specializes in high-end performance wear and gender-neutral apparel. As head of Plugged NYC, Tizita Balemlay is consistently elevating the streetwear game. And finally, by way of her self-named brand, Teniola “Tia” Adeola’s picturesque signature style transforms fashion into an art form.

It's about time that self-starters like these aforementioned women get their just dues from a company that wasn’t always merely “inspired” by up-and-coming Black women designers. In fact, Fashion Nova has an extensive history of design-thievery from this particular community and, to no avail, the company has been called out for its alleged crimes on numerous occasions—the most recent of which would be during the rollout for Megan Thee Stallion’s very own debut collection last November. The Stallion-Nova collaboration yielded clothing that was heavily infused with Megan’s signature Houston hot-girl style, and made a record-breaking $1.3 million worth of first-day sales. But, it wasn’t long before several accusations of theft were made.

Aazhia, designer of the TLZLFEMME fashion brand, notably reported that she’d previously been contacted by Megan’s team to pull an original design for the rapper herself. The ensemble, now repackaged and dubbed by Megan’s Fashion Nova line as the “Chase The Bag Shoulder Pad Mini Dress,” is undoubtedly an eerily similar replica of the original design. In response to these allegations, Megan gaslighted the young designer and absolved herself, her team, and ultimately Fashion Nova of any blame. Regardless of who the face of a particular launch may be, Fashion Nova has become notorious for these blatant transgressions against independent Black women designers. Through the “Women On Top'' fund, the fashion franchise finally seems to be reinvesting into one of its most exploited demographics; but are these corrective measures enough?

Fashion Nova’s exploitative relationship with the Black community, and particularly with Black women, extends far beyond its design-theft controversies. The company has long been accused of cultural appropriation and for profiting from the same physical aesthetics that Black women are often policed for. Its models and social media feeds are seriously lacking in diversity, specifically in terms of skin complexion and body type. Even Fashion Nova’s marketing strategies particularly target Black women consumers through urban music, blogs, influencers, and the flagrant utilization of African-American Vernacular English (AAVE) when advertising. (Hosting an "It's the stimmy for me" sale? Really?)

When global protests erupted last year in response to the police murders of George Floyd and Breonna Taylor (among others), Fashion Nova’s silence concerning issues of racial justice was loud and clear. It wasn’t until the widely-popular fashion and beauty guru Jackie Aina expressed disappointment with the company that Fashion Nova released a statement clarifying its solidarity with the Black community, and that a subsequent $1 million donation was offered to several organizations in support of the movement through the Fashion Nova Cares program. Fashion Nova Cares was launched in April 2020 as a COVID-19 relief program, utilizing Cardi B—yet another superstar rapper of African descent—as the face of the philanthropic campaign.

What’s so frustrating about Fashion Nova is that nearly everything about this non-Black-owned franchise—from its advertising, to its more humanitarian efforts—is legitimized through Black women and their likeness, without the company ever providing much of anything in return. It took a global health crisis and mass protest for Fashion Nova Cares to incrementally begin redistributing the resources that it daily extracts from its consumer base. Even its empowerment initiatives like “Women On Top” are only validated and made sustainable through the celebrity power of Black women artists like Megan Thee Stallion and Cardi B. This kind of performative, exploitative community outreach is exhausting to say the least, and ultimately, brands like Fashion Nova won’t lose their stronghold over the fashion market until we, the consumers, completely divest—which is always immensely easier said than done.

In the meantime, for a company estimated to be valued at $450 million and counting—and for a company that thrives off of the likeness of Black women and the “cool factor” attributed to Black culture and consumer preferences—doling out $1 million here and there is the very least Fashion Nova can do to mitigate the harm it’s caused to these communities. It'll be interesting to witness how designers Maxie, Timeekah, Tizita, and Tia in particular are able to leverage their $25,000 grants into fruitful businesses that give their top competitors a run for their money and honor Black women in ways that brands like Fashion Nova never will.

Harriyanna Hook Talks Acting, Creating Her Own Web Series, And Staying True To Herself: BUST Interview

Self Advocacy Might Have Saved Influencer Grace F. Victory's Life From A System Working Against Her