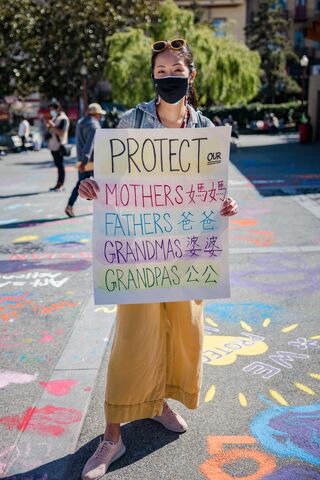 On Tuesday, March 16, eight people lost their lives during three deadly shootings that occurred across three Atlanta spas; six of those eight people were women of Asian descent. On Sunday, an Asian woman named Clarisse was robbed, punched in the face, and dragged by a getaway car in San Francisco. Another Asian woman was hit in the face by a man this week while attending an anti-Asian hate rally with her 7-year-old daughter in New York City. And today, Friday, March 26, news outlets have reported that a 19-year-old Asian teenager named Jessica Dimalanta was shot in the eye over the weekend by a group of unidentified men; Dimalanta survived but is now permanently impaired and unable to chew, all while battling coronavirus. (Donate to her GoFundMe here.)

Anti-Asian hate crimes have increased by 150 percent since the onset of the COVID-19 pandemic last year. According to Stop AAPI Hate, a coalition that tracks incidences of anti-Asian violence in the United States, nearly 3,800 incidents have occurred between March 2020 and February 2021.

The effects of these violent attacks has caused immense pain and grief for the Asian American and Pacific Islander community and has galvanized multiple voices across social media to speak up about their own personal experiences with racism. As an ally, the ways in which you can help are vital to bringing awareness to these issues and to opening and continuing necessary conversations about white supremacy, sinophobia, xenophobia, and racial inequality and injustice. Listen to and amplify people’s stories, donate to local fundraisers for families of those affected by this violence, and support local AAPI-owned businesses and brands. To get started, below are eight AAPI organizations you can support right now:

1. Stop AAPI Hate - This organization works to report and prevent anti-Asian hate crimes by bringing awareness to the increasing amount of violent attacks being committed against Asian Americans since the onset of the COVID-19 pandemic. Stop AAPI Hate also provides safety tips to those experiencing or witnessing hate crimes, as well as bystander intervention training. Donate here.

4. Heart of Dinner - Founded in September 2015 by couple Yin Chang and Moonlynn Tsai, this non-profit collective works to provide quality meals to those who have been affected by the pandemic. Their dedication to helping Asian American seniors struggling with food insecurity has helped them to reach those in Lower Manhattan, Brooklyn, and Queens. Donate here.

5. Asian Pacific COVID Recovery Fund - Based in the Bay Area, this organization is working to provide relief and support for other organizations working to battle the injustices that Asian-Americans face. Their work includes working with other nonprofits, providing scholarships, hosting annual galas, funding initiatives, and more. Donate here.

6. AAPI Women Lead - Also known as the #ImReady Movement, the AAPI Women Lead Movement is a collective meant to uplift AAPI women both in leadership positions and those that have been marginalized. According to their website, their goal is to “challenge and help end the intersections of violence” against their communities. They also work with other communities of color and tackle issues such as sexual violence, racial discrimination, war, and immigration. Donate here.

8. Asian Pacific Environmental Network (APEN) - An environmental justice organization that works to bring environmental, social, and economic justice to all, APEN focuses primarily on Asian immigrant and refugee communities in Oakland and Richmond to “advance solutions to the issues that matter most to them.” Donate here.

12 Women and Non-Binary Asian Americans You Should Know About