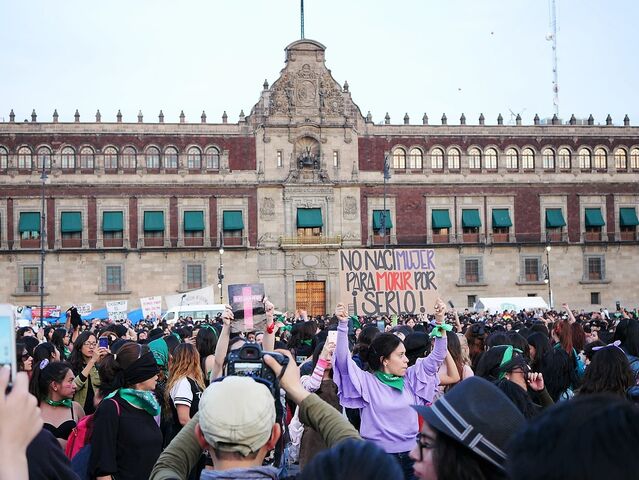 President López Obrador expressed support for Macedonio, who is currently running for governor of Guerrero despite being accused of rape by several women. Macedonio’s case is one among many in the ongoing storm of sexual violence against women in Mexico. An investigation by Animal Politico found that between 2014 and 2018, only five percent of the country’s sexual assault allegations resulted in a criminal sentence. This lack of accountability is what led many women to protest at the National Palace on International Women’s Day.

Over the weekend preceding the march, activists got busy painting Mexico City. They draped a purple banner bearing the words “NO ABUSER IN POWER” across the city’s main square, the Plaza de la Constitución. They “renamed” several city streets by pasting women’s names over street signs. They spray-painted the barricade around the Baroque National Palace—where López Obrador lives—with the names of femicide victims, particularly those who had been killed by romantic partners. They also projected messages such as “a rapist will not be governor” across the palace’s front exterior.

According to CNN, Mexican governmental data reveals that 987 women and girls were murdered within the first four months of 2020, and an average of 10 women were killed in Mexico each day of the year. There were also around 16,000 reported cases of rape in Mexico in 2020, and five million women experienced some form of sexual violence or harrassment in the second half of the year alone.

“We fight today so we don’t die tomorrow,” women chanted as they marched across Mexico City on Monday. “The fault is not mine, not because of where I was or what I was wearing.”

One participant, Irma Quesada, joined the march in support of her 12-year-old daughter, who was raped and stabbed in the face by a 45-year-old man last week. While Quesada’s daughter remains in the hospital, authorities have stated the perpetrator may soon be allowed to walk out of jail due to a supposed lack of evidence. “I’m here so my voice is heard, so justice is done,” Quesada told Reuters. “Yesterday it was my daughter. Tomorrow it could be another girl.”

Another attendee, Ivette Granados, joined the march with her 16-year old daughter, Maria Puente. According to The New York Times, the pair were frustrated and motivated by their “daily struggle” against various forms of sexual abuse, including being grabbed and flashed in public.

While Granados stated she did not support violence, she deemed it an effective tactic in the fight for women’s equality. “I have already seen it throughout history in the peaceful marches of women — they did not give any results,” she told the Times. “I think that these things make governments and people turn around.”

As protestors gathered around the National Palace, several women wearing black ski masks pulled down sections of the 10-foot metal barricade. The police responded by launching flash-bang grenades into the crowd. Following a series of stampedes, the Mexico City security branch reported that at least 62 police officers and 19 civilians were injured by the end of the evening.

“Look, I don’t agree to destroy monuments or damage, right?” Granados told the Times. “But it is also clear to me that a monument is not worth more than the life of a girl.”

Burger King's Ironic, Misogynistic Tweet, And Why It Should Actually Matter To You

Meet The Next Generation of Superstar Activists: Exclusive BUST Interviews