New Statue Honoring "Mother of Feminism" Mary Wollstonecraft Is, You Guessed It, Naked 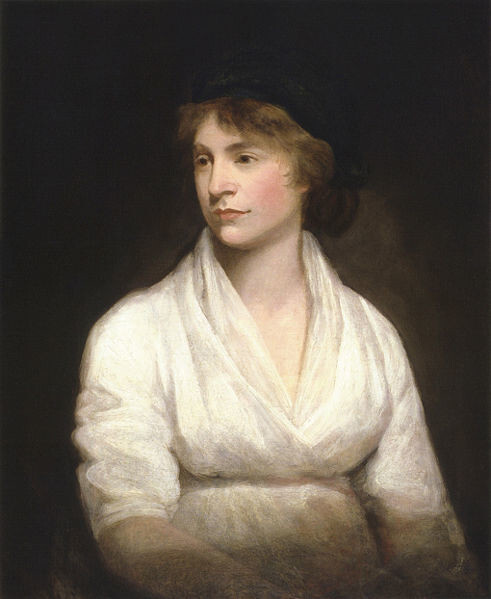 “Why are girls to be told that they resemble angels; but to sink them below women... Yet they are told, at the same time, that they are only like angels when they are young and beautiful; consequently, it is their persons, not their virtues, that procure them this homage,” Mary Wollstonecraft says in A Vindication of the Rights of Woman (1792). Wollstonecraft is regarded as the mother of Western feminist thought, and her texts are widely acknowledged as the major foundational philosophy for the women’s suffrage movement. Today in North London, her legacy has been realized through sculpture. Rising out of a swirling silver mass is a naked woman standing tall with a gaze staring straight ahead. On the base of the statue reads a quote by Wollstonecraft: "I do not wish women to have power over men, but over themselves."

This is the first sculpture dedicated to the work and life of Wollstonecraft, and one of only 10 percent of statues in London commemorating women. Sculpted by Maggi Hambling, its unveiling comes after a decade of campaigning by the collective Mary on the Green to raise the £143,000 needed for its creation. Mary on the Green's campaign website reads, "The memorial will be a tangible way to share Wollstonecraft's vision and ideas. Her presence in a physical form will be an inspiration to local young people in Islington, Haringey, and Hackney… Just as the image of Churchill's memorial statue is used in debates on his legacy, the same is needed for Mary Wollstonecraft."

While the idea is honorable, the execution seems to be amiss. To have a foremother of feminist thought commemorated in a nude "every-woman" form is a bit confusing. If not wholly unexampled, it's rare to see a male thought leader honored for his ideas through a naked statue. Unsurprisingly, the internet feels similarly. Here a few clever takes:

feminism - invented by Mary Wollstonecraft - is about women doing stuff like emerging, silvery, large-headed, from wobbly generically feminine shapes — someone who definitely did the reading before making the statue pic.twitter.com/9sTGwSKQDY

Thanks to everyone who contributed to the lively Mary Wollstonecraft debate. Unlike Maggi Hambling's flaccid bronze bust of Oscar Wilde rising from his coffin smoking a cigarette, at least this statue is standing up; making it easier to pull down. pic.twitter.com/HzDKr4vhbL

We’re not “honouring” Mary Wollstonecraft, a pioneer of feminist writing and politics, by reducing her to a sex object. I’ve seen countless statues valourising the deeds of men, and not one of them was stripped of his clothing. https://t.co/WcD7yhwpd9

a) every woman doesn't look like this b) FAMOUS MALE INTELLECTUALS GET STATUES OF THEM SO WE SEE THEM AND REMEMBER THEM c) being hot and naked so regularly defines women that to deliberately play INTO it does nothing but reinforce tired old tropes. https://t.co/L9N5rduRnW

“Taught from infancy that beauty is woman's sceptre, the mind shapes itself to the body, and roaming round its gilt cage, only seeks to adorn its prison.” Mary Wollstonecraft on the harm done by reducing women to decorative sex objects, published back in 1792.