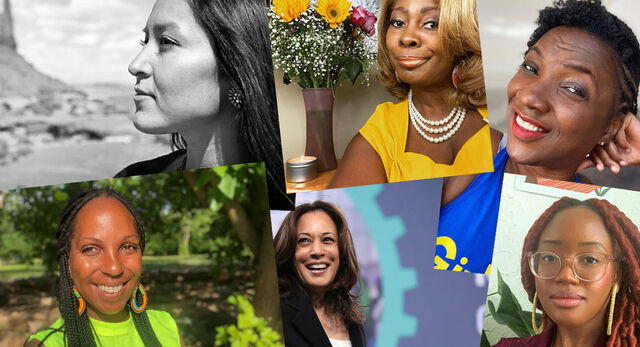 You may have already heard about the hard work that Stacey Abrams did in Georgia to get out the vote, and help turn her traditionally red state blue, but she's far from the only woman of color who contributed to Trump's ouster. Many other Black and Indigenous women also put their efforts towards getting Trump out of office, by mobilizing record numbers of new and young voters to the ballot box. In traditionally Republican states like Arizona, Georgia, and Pennsylvania, these organizers brought out hundreds of thousands of voters, armed with knowledge not only about Biden/Harris, but also about voter suppression and Senate and House elections. And these Black and brown women didn’t only mobilize voters across race and gender demographics, they also maintained their voting habits. An NBC News exit poll reported that 91% of Black women voted for Biden/Harris. In 2016, 94% of Black women voted for Clinton/Kaine.

Here are some of the Black and Indigenous women who mobilized and organized to get Trump out of office:

Latosha Brown is a co-founder of Black Voters Matter, a non-profit that builds power within Black communities and mobilizes Black people across the country to vote. The organization focused on Southern states this election year and Brown, a Georgia native, said watching Georgia turn from a “solid red state” to purple is indicative of the power of Black voters.

Stacey Abrams, along with Tracey Ann-Nelson, Salena Jegede, and Nse Ufot to name a few, registered 800,000 new voters with the collective power of Fair Fight and the New Georgia Project. As the state’s Senate election goes to a runoff, these organizations helmed by Black women are only getting started.

Jessica Byrd, Kara Hollingsworth, and Naomi Long are all partners at Three Point Strategies, a political strategy organization that fights for “Electoral Justice for Black Lives.” They provide consulting services for candidates that fight for racial justice and they center Black women’s voices at events like the "She The People Presidential Forum." Byrd was Abrams deputy campaign manager in 2018.

Morgan Dixon and Vanessa Garrison founded GirlTrek 10 years ago and have since amassed 850,000 members nationwide. Their mission is to create communities of Black women that can walk together for exercise, companionship, and what they call "radical self-care." This year they launched the Black Girls Justice League which mobilized its members to walk to the polls on Election Day and signed up volunteers at over 10,000 polling places.

Allie Young, a Diné woman from the Navajo Nation, launched Ride to the Polls in October. During early voting and on election day, Young led community members on horseback to the closest polling place, two hours away. Her grassroots organization, Protect the Sacred, empowers young Indigenous people to become advocates for their culture and traditions. Her Ride to the Polls initiative not only got more young Diné and Hopi youth to vote, it also brought attention to voter suppression in Indian country. In the three Arizona counties that overlap with Navajo Nation and the Hopi tribe, Apache, Navajo, and Coconino, 97% of voters picked Biden/Harris, flipping the state.

While Black women’s turnout has remained high in favor of Democratic candidates, and Indigenous women continue to fight for Native voters despite immense voter suppression, white women have continued to uphold white supremacy and ignore sisterhood. A New York Times exit poll reported that 55% of the white women who voted, cast their votes for Trump/Pence, which is up from the 52% that did in 2016. In an op-ed for Quartz, Marcie Bianco wrote, “White women’s modus operandi for gaining power—economic, political, and otherwise—is simple: acquire power from those who have it. And those who have historically had it are white men.” While it is no secret that white women often favor their race privilege while sacrificing female solidarity, this election is another reminder that white women will vote for a violently misogynistic man as long as he plans to uphold their race and class power.

Time and time again Black and Indigenous women lead the United States to the more progressive candidate, despite these candidates still harming their communities. Taylor Crumpton, in an op-ed for the Washington Post, warned the United States that Black women cannot be heralded as saviors in election years and then discarded. This election is an opportunity to change that pattern. She wrote, “We’re not your monolith — so especially now, after we turned out all over the country to sweep Trump from office, Democrats had better support and listen to Black women even in odd-numbered years. We’re not here to save the world. We’re just here to protect ourselves.”

Gabriella Shery is an illustrator, graphic designer, and comic artist from Brooklyn, New York. You can find her work on Instagram at @gabshery, or on her website at http://gabriellashery.com.

She The People Summit Propels Women Of Color Into Politics