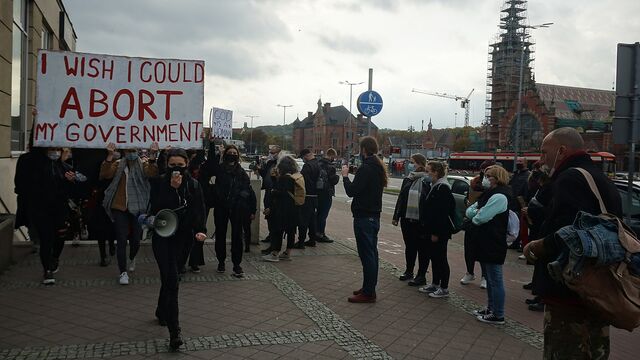 Protests in Poland have erupted this week following the country’s decision to ban nearly all abortions. Last Thursday, a constitutional tribunal ruled that abortions for fetal abnormalities violate Poland’s constitution, making pregnancy terminations near impossible. This ruling is only an extension of the country’s already restrictive abortion laws, which have ranked Poland one of the most dangerous European countries for people with uteruses.

Julia Przylebska, president of the tribunal, said that abortions in the case of fetal abnormalities are “eugenic practices with regard to an unborn child, thus denying it the respect and protection of human dignity” and are “a form of discrimination” on behalf of the Polish constitution, which guarantees a “right to life.” Przylebska’s anti-abortion stance reflects the country’s traditional Roman Catholic affinity, historically an obstacle when it comes to women's rights.

Before this ruling, “1,074 of 1,100” of the abortions performed in Poland last year were because of fetal abnormalities, making it the leading cause of terminated pregnancies. Now, many women will be forced to pursue abortions either abroad or illegally. And, in other cases, give birth to terminally ill children. According to the World Health Organization, “nearly 70,000 women die each year due to the com­plications of unsafe abortion,” which includes illegal or underground abortion practices. Now women in Poland, especially those of lower-class, may have no other choice.

Jaroslaw Kaczynski, one of Poland’s most powerful politicians and leader of the governing Law and Justice party, elected Przylebska, a longtime friend, as president of the tribunal. Kaczynski has continually pushed an anti-abortion narrative for Poland, saying things like, “I would really like this kind of abortion to be at least restricted to the most extreme cases.”

In spite of the protests that have erupted throughout Poland this past week, Kaczynski has threatened a call to arms, calling protesters “criminals” eager to “destroy the Polish nation.” And since coronavirus cases have spiked in Poland, Kaczynski is desperately using it in his defense. In response, Donald Tusk, former president of the European Council, said to Kaczynski, “When others were getting ready for a war with the virus, you were getting ready for a war with the nation…back out before a tragedy occurs.”

In several Polish cities, protesters have taken to the streets, dressed in Handmaid’s Tale-esque cloaks, rallying outside churches, and pushing for a parliamentary lockdown. Women have been hit by cars, beaten to the ground, and teargassed. “Now it’s not really just about abortion, it’s a protest about the loss of humanity,” said actress Emma Herdzik in an interview with the New York Times.

The current state of Poland is one that feels estranged yet eerily close the fate of reproductive rights in the United States. Since Amy Coney Barrett has joined the Supreme Court, access to safe abortions could be jeopardized on account of pro-life, religious ideologies. To protect the fate of reproductive rights in the future, the battle being fought by Polish women is one that should be taken on globally as a fight in solidarity with people with uteruses everywhere.

Ted Cruz Thinks the Abortion Pill Should be Banned and, Apparently, Pregnancy is a Walk in the Park