Can Women in Swing States Save America? The Latest Polling Looks Promising 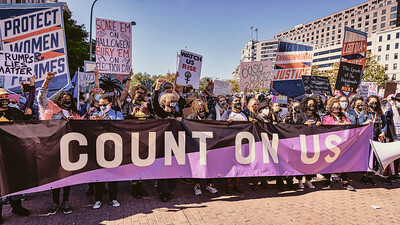 With the confirmation of Amy Coney Barrett solidifying uncertainty for the future of Roe v. Wade, today is a dark day for feminists everywhere. However, in less depressing news, the most recent polls show that women in swing states are on track to do some heavy lifting in securing a Biden win. Although a woman’s right to choose is hanging in the balance, a Biden presidency could allow for some stability with the possibility of a Supreme Court expansion.

Ms. Magazine's polling suggests that in battleground states, the gender gap between support for Donald Trump and support for Joe Biden is ever-growing. The gender gap measures the difference in men's and women's votes for the leading candidate. In each of these cases, Biden is leading in favoribility with female voters over male.

While Black women are the most consistent voters in the Democratic Party and tend to vote at higher rates than other groups, there was a significant split between white women who voted for Trump versus Hillary Clinton in 2016. But it seems those numbers may be changing this time around. Not only are the polls showing growing support for Biden among white suburban women in swing states, but they have been on the ground, organizing as well.

On October 13, Trump pleaded with suburban women in Pennsylvania. “Suburban women, will you please like me?” he begged, “I saved your damn neighborhood, OK?” Although the crowd met his rhetoric with cheers, widespread support from women seems unlikely as we close in on Election Day. It is important to keep in mind that polls are not necessarily conclusive, but this election season’s polling has been relatively stable in comparison to 2016. Monica Hesse at The Washington Post points out that the first national election gender gap was in 1980, but things are noticeably different this time around. “This feels more like a revolt,” says Hesse.

Sarah Silverman, Amy Schumer, And Tiffany Haddish Get Naked To Help You Vote