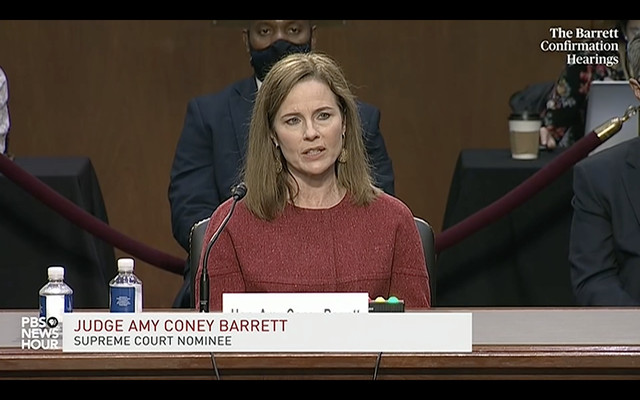 After four days of Amy Coney Barrett’s Senate confirmation hearing that culminated in Democratic Senator Dianne Feinstein’s highly questionable, maskless hug with Republican Senator Lindsey Graham, I think we all need a debrief, and a stiff drink. In what Rolling Stone called “the most useless job interview ever,” Barrett successfully evaded almost all of the questions thrown her way. How wild of us to expect answers out of a woman who could sit on the highest court of the country for the rest of her living years.

Many feminists shy away from criticizing any woman in a powerful role but not calling Barrett out for her anti-choice, climate crisis-denying and racist views is a crime against all women in this country. Intersectional feminism calls us to advocate for all women on the intersections of class, race and (dis)abilites to name a few. Barrett is an enemy of these values. She uses her powerful role as a white female lawyer and now possible Supreme Court Justice to revert the progress of women's movements in the United States. This week of hearings gave us many feminist reasons to denounce Barrett, starting with her view of the constitution.

With her blank notebook in hand, Barrett said she couldn't answer questions about her personal beliefs because of her commitment to an originalist view of the Constitution. Her description of originalism is that she interprets modern day court cases with the "meaning that it [the Constitution] had at the time people ratified it." Essentially, Barrett views and decides on modern court cases with the values of the 18th century. Oh, joy!

As many who watched can attest to, non-answers are much more frustrating than honest bad answers. Barrett explained her continuous refusal to answer questions by her feeling that she cannot answer a question if the ruling could come before the court during her possible tenure. I say ‘feeling’ and not ‘fact’ because it’s just not true. In past confirmation hearings, both Republican and Democratic nominees clearly answered the exact same questions asked of her.

Amy Coney Barrett refused to say that the Supreme Court decision that protects access to birth control was rightly decided.

When past Republican and Democratic-appointed nominees were asked the same question, their answers were very clear.

What does Barrett have to hide? pic.twitter.com/8JMA54FGm0

1. Amy Coney Barrett refused to say what constitutes voter intimidation and would not comment on the presence of racial bias at the polls.

2. Amy Coney Barrett does not have “firm views” on climate change. Currently, there is a major climate case in front of the Supreme Court that includes Shell Oil, where Barrett’s father worked for decades.

3. Amy Coney Barrett cannot list one study, book or text that she has read about implicit bias in the criminal justice system even after Senator Cory Booker gave her 24 hours to prepare for the question.

5. Amy Coney Barrett refused to say whether a president must commit to a peaceful transfer of power.

After the hearings ended on Thursday, the Republicans on the Senate Judiciary Committee set a vote for Barrett’s nomination on the 22nd of this month with a final vote to be held on the 26th.

I’m sure you need a laugh after all of that so please enjoy this hilarious TikTok perfectly mocking what it was like to watch Amy Coney Barrett not answer questions.

Amy Coney Barrett Is A Threat To Civil Rights