Sarah Silverman, Amy Schumer, and Tiffany Haddish Get Naked to Help You Vote 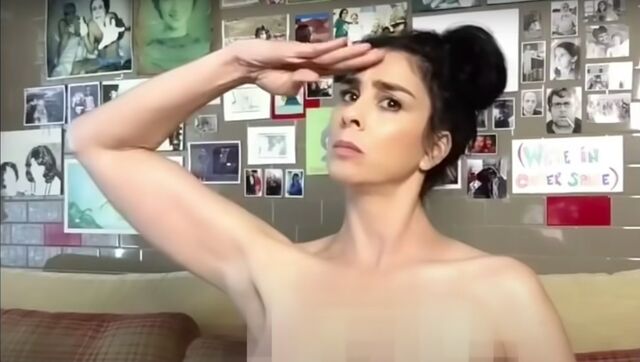 RepresentUs, a grassroots anti-corruption organization, had celebrities strip down for voter rights. Sarah Silverman, Amy Schumer, and Tiffany Haddish were among those who got naked to warn against mistakes that are commonly made when filling out and sending mail-in ballots, specifically the issue of “naked" ballots.

There are 16 states that may require voters to enclose their ballots in a secrecy sleeve, also known as an inner envelope, privacy sleeve, or identification envelope, and then place it in a second outer envelope. Whether or not this is a requirement may depend on your local election board. If required, a mail-in ballot without the secrecy sleeve will be considered a "naked "ballot and it will be disqualified.

Wondering what else you can do to ensure your vote is being counted?

1. Use a black or blue pen
Different states may explicitly indicate that either a blue or black pen must be used to fill out your ballot, as ballot scanners can only read certain ink colors. Check if your ballot specifies whether you should be using black or blue, or if both are acceptable. The use of any other color of ink, markers, and pencils will make your ballot unreadable and result in disqualification.

2. Mail your ballot early
Send in your ballot as soon as you can. If your ballot arrives late, it will be disqualified. Most states even offer online ballot tracking.

3. Don’t forget to sign
Although signing your ballot may seem like an obvious step, a ballot may require your signature in multiple places. There are 18 states that will notify voters if there are issues with their signatures, but it is still essential to check that you have signed in every place that it is required.

4. Match your signature
Some states may do a comparison of the voter’s signature on their ballot to the signature on their registration paperwork to confirm their identity. Mismatched signatures led to the disqualification of 67,000 ballots in 2018.

5. Remember your witness signatures
Ballots may need to be signed by at least one witness depending on state requirements. In Wisconsin’s April 7 primary, over 14,000 votes were disqualified because they were missing a witness signature. State-by-state witness requirements can be found here.

As Silverman, Schumer, Haddish, and others urge, it is so important to make sure that you are carefully following all of the instructions on your mail-in ballot. RepresentUs has also provided a state-by-state breakdown of deadlines for requesting and submitting a mail-in ballot and how you can apply for a mail-in ballot online.

Tags: Sarah Silverman , Amy Schumer , Tiffany Haddish , 2020 election , voter rights , naked ballots
Support Feminist Media!
During these troubling political times, independent feminist media is more vital than ever. If our bold, uncensored reporting on women’s issues is important to you, please consider making a donation of $5, $25, $50, or whatever you can afford, to protect and sustain BUST.com.
Thanks so much—we can’t spell BUST without U.