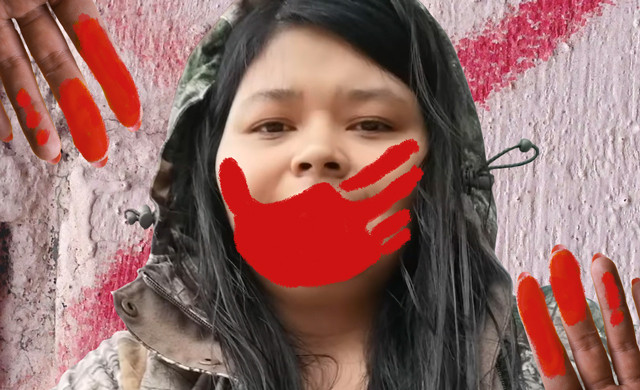 Joyce Echaquan was a 37-year old Atikamekw woman of the Manawan community in Quebec. She was a mother to seven children and respected by the members of her tribe. On September 28, Echaquan went live on Facebook in a Joliette, Quebec hospital as she writhed in pain. Echaquan had a heart condition treated with a pacemaker and was experiencing intense stomach pain. The video showed a nurse and an orderly yelling at Echaquan in French to shut up and saying she’d be better off dead.

Later that day, Echaquan died. The nurses had administered a high dose of morphine, despite Echaquan's concerns that she would have an adverse reaction. Echaquan’s husband, Carol Dubé, and the school director from the Atikamekw Nation, Guy Niquay, mobilized immediately, traveling 249 miles to Ottawa, Canada’s capital, to speak to federal officials. In a heart-wrenching portion of the testimonies Niquay got on his knees with Echaquan’s son, Thomas-James, to beg Canada’s Minister of Crown-Indigenous Relations Carolyn Bennett and Minister of Indigenous Services Marc Miller for justice. “Mr Miller, Madame Bennett, I beg you to help me. I don’t want to wait for one year. I want action,”

The injustice Echaquan faced while she attempted to get life-saving help from a hospital is a story Indigenous people in Canada know all too well. Last year Quebec Superior Court Justice Jacques Viens hosted an inquiry into the treatment of Indigenous peoples in Quebec. Members of Echaquan’s community testified that at the very hospital where Echaquan died, Centre Hospitalier de Lanaudiere, they had been called racist slurs and had not received proper treatment because of prejudice surrounding their language. Viens concluded it was “impossible to deny” the systemic racism present in Quebec's public services.

A similar inquiry by the Canadian government in 2019 found that Indigenous women were 12 times more likely to be killed or to disappear than other Canadian women. The report concluded that the Canadian government was “complicit in race-based genocide” of Indigenous women. And yet, cases like those of Echaquan’s continue. The report itself states "One of the family members' and survivors' biggest fears in opening themselves up to this process as intense as this one is that in the end, nothing is done - the report gathers dust on a shelf and the recommendations are left unanswered."

The Grand Council of the Crees in Quebec fears that the systemic racism in Canada that killed Echaquan may continue to kill unless there are systemic changes. Their statement read, “The racist slurs and degradation she suffered at the Joliette Hospital were the same they might have been 50 years ago. The hospital staff did not see her as a human being, but as something that they could abuse with impunity.” They continued,  “And that is the heart of the problem … Such conduct could only happen in an environment that tolerated it. The staff abused Joyce Echaquan because they thought that they could, with impunity, without consequences.”

The nurse and the aide were fired a day after the incident and multiple investigations have been promised. The Echaquan/Dubé family lawyer, Jean-Francois Bertrand is initiating lawsuits against the two assailants in Echaquan’s live video and the hospital itself. The Quebec coroner's office has promised to launch a public inquest into Echaquan’s death and Bertrand intends to file a complaint with local police.

The Sunday after Echaquan’s death, Indigenous families around Canada held their annual remembrance day for missing and murdered Indigenous women, girls, two-spirit and gender diverse people. Protestors around Canada wore red dresses, stamped red painted hands over their mouths and chanted “no more stolen sisters.” As Echaquan’s family said, “Joyce Echaquan’s case at Joliette Hospital is certainly not unique, but rather the tip of the iceberg.”

Donations for Echaquan’s family can be made here