Once Again, Twitter Has Double Standards When It Comes To Trump 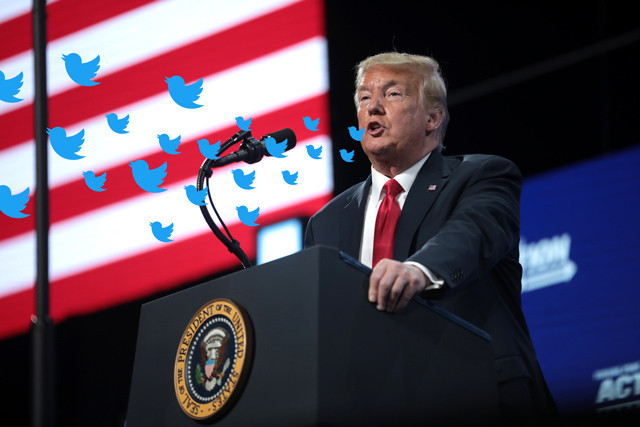 President Trump’s hasty COVID-19 recovery has brought on many conflicting feelings. After the news of his sickness broke, only two days after his cringeworthy debate performance where Trump mocked Biden for wearing “the biggest mask,” Twitter erupted. Some called the diagnosis his karmic fate; others wished death upon him. Soon after, Twitter resoponded to the surge, saying, “Tweets that wish or hope for death, serious bodily harm or fatal disease against *anyone* are not allowed and will need to be removed. This does not automatically mean suspension.”

tweets that wish or hope for death, serious bodily harm or fatal disease against *anyone* are not allowed and will need to be removed. this does not automatically mean suspension. https://t.co/lQ8wWGL2y0 https://t.co/P2vGfUeUQf

Politicians including Alexandria Ocasio-Cortez came forward to call out the platform's contradictory policies. In response to Twitter, Ocasio-Cortez asked, “So… you mean to tell us you could’ve done this the whole time?” The congresswoman, who has previously opened up about the death threats she has received, many of which are from men who “want to kill her,” is skeptical of the people Twitter is choosing to defend.

What people don’t (maybe do) realize is when orgs air these hateful messages, my life changes bc of the flood of death threats they inspire.

I‘ve had mornings where I wake up & the 1st thing I do w/ my coffee is review photos of the men (it’s always men) who want to kill me. https://t.co/hiYbPghad7

Other representatives such as Rashida Tlaib, Ilhan Omar, and Ayanna Pressley have also come forward about the death threats they receive on Twitter. Last year, Omar received countless threats from right-wing extremists after Trump tweeted a clip of her speech, suggesting that she was dismissive of 9/11. Omar said in a statement, “Violent rhetoric and all forms of hate speech have no place in our society, much less from our country's Commander in Chief. We are all Americans. This is endangering lives. It has to stop.” Tlaib and Pressley also came forward about Twitter’s lack of initiative when it comes to their safety.

Seriously though, this is messed up. The death threats towards us should have been taking more seriously by @TwitterComms https://t.co/IOS7s2n1wx

However, other figures expressed support for Twitter’s statement. Filmmaker Ava DuVernay began a tweet to Trump, “I truly hope you get well as you’re infected with a life-threatening virus and are physically ill.” After receiving backlash for her tweet, DuVernay responded to one call-out from writer Kinsey Clarke, tagging Vogue Magazine, where Clarke works. Clarke responded to DuVernay’s tweet, writing, “I think we all should be asking @Ava why, instead of directing her anger at a president who is gaslighting an entire nation and infecting his work staff, she decided to tag my employer when I pulled her receipts up. I personally would really like to know.”

I think we all should be asking @Ava why, instead of directing her anger at a president who is gaslighting an entire nation and infecting his work staff, she decided to tag my employer when I pulled her receipts up. I personally would really like to know. pic.twitter.com/wsfZN9ER6O

Twitter's new policy proves one thing: Trump's fragility matters more to the platform than genuine threats from white supremacists. COVID or no COVID, this has to change.

Tags: Trump , covid , recovery , double standard , twitter , AOC , Ava DuVernay , Rashida Tlaib , Ilhan Omar , Ayanna Pressley
Support Feminist Media!
During these troubling political times, independent feminist media is more vital than ever. If our bold, uncensored reporting on women’s issues is important to you, please consider making a donation of $5, $25, $50, or whatever you can afford, to protect and sustain BUST.com.
Thanks so much—we can’t spell BUST without U.