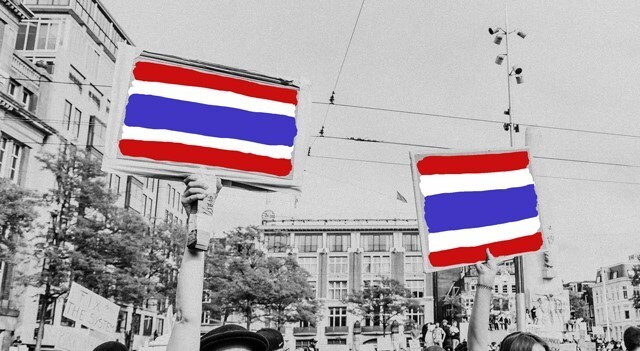 Since March, thousands of student-led protests have flooded the streets of Bangkok to denounce the Thai government. For a brief moment, the protests were halted due to the coronavirus pandemic but have picked back up since June when restrictions were lessened.

The demonstrations have aimed criticism at their government’s lack of initiative to embrace new ideas, so women, especially young students, rallied to have their concerns raised to the forefront. In tandem with the anti-government protests, Thai women have used the momentum to vocalize their dismay toward patriarchal control in their most powerful institutions; the military, the monarchy, and Buddhist monkhood. Women protestors have also voiced concern about access to abortion, rape culture, menstrual taxation, and school customs that enforce out-dated ideologies of femininity for girls.

According to the New York Times, “Many of the earliest and most vocal organizers of the rallies have been female students. At recent protests, women appeared to make up the majority of participants, too.”

The protests are motivated by the inequalities Thai women face in healthcare, government, and general safety. Even though Thailand was named one of Asia’s most equitable countries for women, male supremacy has been on the rise since the 2014 coup. The current leadership is not interested in creating a more equitable society, in fact, they are aiming for the opposite. They bolster traditional and conservative views on gender, limiting women’s access to politics and sometimes education.

As reported by ASEAN Today, “Any female in the [National Legislative Assembly] would first have to secure the approval and appointment of the male-dominated military. Unsurprisingly, the military awarded women just 3 percent of the seats available.” Previously in 2011, women secured 15 percent of parliament.

In addition, issues relating to menstruation are still considered taboo in Thailand, leaving gaps in information about the topic. However, the prices of menstrual products estimate around $10, which is inaccessible to most Thai women.

In February, the Thai court claimed anti-abortion laws were unconstitutional. Women are legally allowed to obtain abortions if their “physical and mental health is at risk, the fetus has a high risk of a genetic disease, or in cases of rape and girls under the age of 15.” However, it is also legal for complaints to be filed against women who pursue abortions with consequences of three years in prison or a fine of $191.

The group Women for Freedom and Democracy believe reproductive rights are essential to democracy. A statement from the group read, “The right to safe abortion is a woman’s right, is a reproductive right, is a human right. Stop controlling women’s freedom, stop terrorizing citizens, and dissolve parliament if you cannot spell ‘human rights.’”

In 2016, Thai Prime Minister Prayuth Chan-Ocha, leader of the 2014 military coup that took over the Thai government, said, “Everyone says that we have to create justice, women and men have equal rights. Thai society will deteriorate if you think this way.”

Prayuth claimed that women’s power belonged solely to the home.

An article from Thai Enquirer reported that the Prime Minister’s comments are often taken as “jokes,” but asserts, “Thai militarism is the enemy of feminism. It is patriarchy incarnate, and its ‘jokes’ mask negligence that has deeply failed Thai women – especially low-income or rural women – who [are] already suffocated by a patriarchal society.”

However, there is some hope. The New York Times also reported, “The young generation today has the vocabulary to name what’s wrong with society when it comes to gender issues,” said Duanghathai Buranajaroenkij, an expert in gender studies at Mahidol University in Bangkok. “When I began studying gender, most people in Thailand didn’t even know to use a gender lens to look at things.”

Unfortunately, women protestors are being forced to combat with the men protestors who do not all believe that democracy and women’s rights go hand-in-hand.

When the New York Times interviewed activist Chumaporn Taengkliang, a co-founder of Women for Freedom and Democracy, Taengkliang recalled fellow male activist, Attapon Buapat, reaction to her speech. “Women, honestly speaking, are a nosy gender,” Buapat said. “That’s why God cursed women to have a weak body in order to effectively reduce their meddlesomeness.”

According to the Thai Enquirer, Arnon Numpa, another male pro-democracy activist was called out for sexual harassment as well. He quickly apologized via Twitter claiming, “At first I didn’t think about it, but when someone warns me that it is contrary to the democracy movement, I agree with them.”

Only some of the men protestors accused of sexual harassment and misogyny have apologized. Despite the multiple groups of men attempting to silence Thai women, they refuse to stop fighting for their rights.