How a Pin Helped Mid-Century Women Slow Down Speeding Suitors 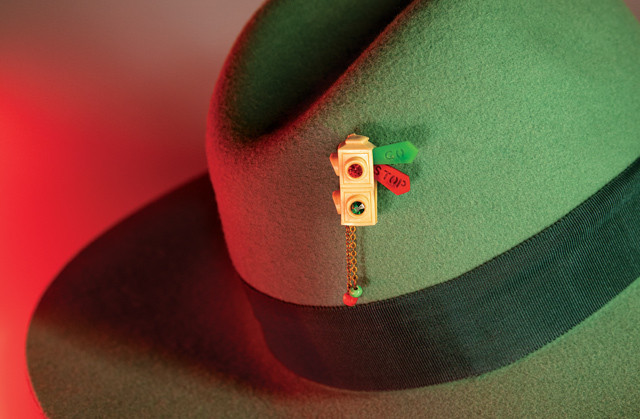 In 1947, Women’s Wear Daily reported on a fad for novelty pins among “college girls,” who loved their “pearls and sorority pin” but would “never turn down an item that’s an attention getter, a source for conversation, or a piece that would stagger a stag line.” A small plastic pin shaped like a traffic light filled the bill: pull one of its tiny chains and a red blade emblazoned with “STOP” popped out; pull the other, and a green one marked “GO” appeared.

The pin was modeled after the Acme traffic regulator, an early form of stoplight that used red and green lights along with “semaphore arms” to control the flow of traffic. There were other types of signals in use, but because Acme lights were installed in Hollywood from 1923 until the mid-1950s, they were familiar nationwide because of their appearances in theatrically released cartoons and movies.
Worn as women’s jewelry, a traffic light was more than a mere piece of proto-pop art. The way gossip columnist Walter Winchell reported in 1945 on a starlet’s “clever new lapel gadget” (a battery-operated pin that flashed red and green) the accessory hinted at deeper layers of meaning. “She stops traffic with it,” he said, referring of course, to her sexuality.

Winchell’s reading ignored a more blatant context of STOP and GO in mid-20th-century heterosexual dating rituals. Worn pinned to her dress, a traffic light pin allowed the wearer to make a comment on whether she was ready to STOP or GO when approached by a possible love interest. The pin was meant to elicit a laugh, but the underlying message was serious: women were supposed to STOP men before things “went too far.” Consider the dating advice from an “ex-wolf” presented to the young female readers of Seventeen magazine in April 1945. If a boy expected “a good night kiss…chances are that it has been your behavior during the evening that gave him the idea. Unless he’s an out-and-out heel (in which case you weren’t smart to go out with him in the first place) a tactful turndown will earn his respect and admiration.”

Almost 50 years later, an updated traffic light pin helped women police men’s sexual behavior in the office. The “Harasser-Flasher” allowed its wearer to activate green (“what’s being said is OK”), yellow (“pushing it a little bit”), and red lights, as necessary. Along with the latter, a siren wailed. “With a touch of a button, you’ll be able to avoid harassment,” its female inventor optimistically told the press in 1993, though, as one critic noted, a pin that squirted Mace “or possibly emit[ted] death rays” would probably have been more useful.

The Surprising History Of Women And Pockets

Tags: femoribilia , traffic pin , dating , courting , harassment , street harassment , sexual harassment , herstory
Support Feminist Media!
During these troubling political times, independent feminist media is more vital than ever. If our bold, uncensored reporting on women’s issues is important to you, please consider making a donation of $5, $25, $50, or whatever you can afford, to protect and sustain BUST.com.
Thanks so much—we can’t spell BUST without U.