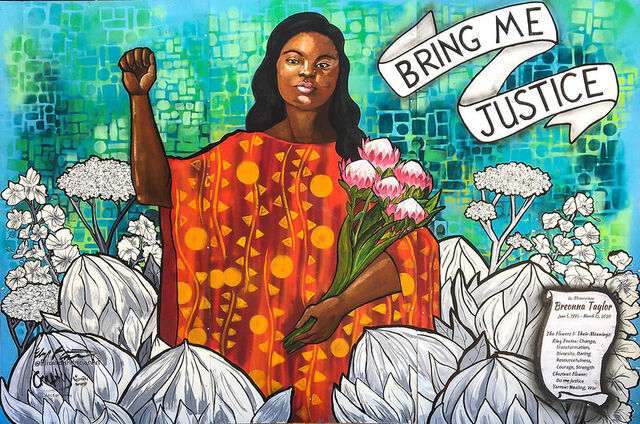 The state of Kentucky describes wantonly as such: “A person acts wantonly with respect to a result or to a circumstance described by a statute defining an offense when he is aware of and consciously disregards a substantial and unjustifiable risk that the result will occur or that the circumstance exists. The risk must be of such nature and degree that disregard thereof constitutes a gross deviation from the standard of conduct that a reasonable person would observe in the situation.” In other words, negligence despite having an understanding of the possible consequences.

Sixty-five years ago to the day of the announcement that no one would be held accountable for Breonna Taylor’s death, Emmett Till’s murderers also walked scot-free. What is perhaps the most painful of all, is that the decision not to charge Taylor’s killers did not come as a surprise. Rather, this ruling is further verification of a painful truth. Her life, to this court, is less important than her neighbor's drywall. Taylor’s name was not even mentioned in the indictment. There is a special cruelty to leaving her name entirely out of the official case, when activists and protestors have rallied around the call, “Say her name.”

There is no such thing as justice when the state takes a life. “Justice” is an illusion when someone dies at the hands of the people who we pay to protect us — the least the system can do is own up to it. True justice would be for Breonna Taylor to still be alive. Yet, for the city of Louisville to pay her family 12 million dollars for an unjust death and turn around and not charge the police officers for said unjust death is not equally as confusing as it is resounding.

Everyone-and I do mean everyone-should be against officers being able to walk into your home and kill you with impunity.

— brittany packnett cunningham does not do remixes. (@MsPackyetti) September 23, 2020

Of course, people are protesting this ruling; they have a right to. Still, there is a cyclical feeling as political figures call for protesters to leave property alone and stay calm. Property. If it was not already clear that property was seen as more valuable than Black lives, it has never been more evident. Louisville has made it a precedent by charging a police officer for stray bullets fired into a neighbor's apartment, rather than for taking a human life. All we are asking for is to be acknowledged as more than property. For 400 years, all we have been asking for is to be respected as unique, complex, valuable human beings. When someone is killed by law enforcement and treated as collateral damage to something considered a net good, this country, and the powers that be, tell us that we are not. Over and over and over again. With this court case, we are once more reminded that the system is working the way it was intended to. How can you reform that?

If you would like to donate to bail funds for people who, unlike Breonna Taylor’s killers, will be charged for protesting, you can do that here, here, and here.

For The First Time, Oprah Isn't On The Cover Of "O Magazine" — Here’s Why

Tags: Breonna Taylor , defund the police , injustice
Support Feminist Media!
During these troubling political times, independent feminist media is more vital than ever. If our bold, uncensored reporting on women’s issues is important to you, please consider making a donation of $5, $25, $50, or whatever you can afford, to protect and sustain BUST.com.
Thanks so much—we can’t spell BUST without U.