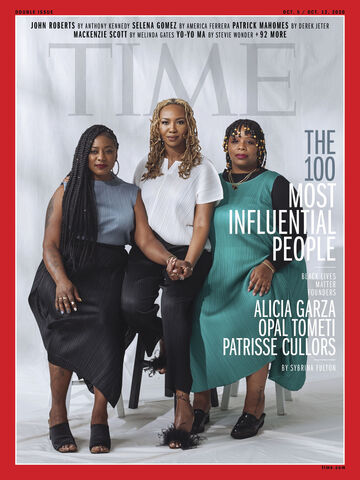 TIME magazine released their annual list of 100 most influential people last night during a live televised event in collaboration with ABC. Of the 100 listed, 54 are women and seven of them grace TIME’s iconic magazine covers that will hit newsstands in early October. In a last minute decision, TIME added the late Ruth Bader Ginsburg to their stack of eight covers to honor her lifelong influence and leadership.

Every person on this list wields power, whether they are an athlete, an author, an artist or even an astronaut. Here are just a few of these dynamic, instrumental women:

Megan Thee Stallion, rapper and musician, lead the pack of what TIME calls 'Pioneers.' She donned a floor-length gold gown and long swinging braid in her cover and was wrapped in praise by actress Taraji P. Henson inside its pages. Shiori Ito, another 'Pioneer,' is a Japanese woman who fell into activism after publicly accusing her harasser and winning a civil suit against him in December. She has gone on to inspire legislative change in Japan including a three-year plan to curb sexual violence. Camilla Rothe documented the first case of asymptomatic Covid-19 in Munich and even though the greater scientific community tried to ignore her at first, her findings have saved thousands of lives.

In the 'Artists' section, Michaela Coel received adoration from fellow actor Lena Waithe who wrote, “Michaela obviously has fear, because she’s a human being. But she’s not afraid to put that fear aside—and to step out in front of those who are still waiting to be free.” Julie Mehretu was honored for her dedication to painting landscapes that reflect our current fractured realities. Taylor Swift wrote about producer/actor Phoebe Waller-Bridge who creates and stars as complex female anti-heroes in a fresh and naturally feminist way.

One of the gifts of the TIME100 list is highlighting innovators that are often relegated to the back pages of a National Geographic. One such 'Leader,' as TIME calls them, is Nemonte Nenquimo, an Amazonian woman who is the president of the Waorani of Pastaza and a co-founder of the Ceibo Alliance. Last year, she brought forward a lawsuit to protect Waorani land in Ecuador, and won, providing assurance and hope for Indigenous peoples across South America. In her documentary-style TIME video she said, “The world needs to listen to the voices of Amazonian women because we as women are the ones who go out to defend it. We are the ones who want our children to live well, and we are the ones fighting.”

The 'Leaders' list also included Paris mayor Anne Hidalgo who has enacted plans in her city to combat the global climate crisis and Bonnie Castillo, the leader of National Nurses United and the California Nurses Association who has fought for nurses' rights throughout the pandemic.

The last two sections of the TIME100 list are less about concrete actions, like writing a novel or going to space, and more about cultural influence, including people who encourage societal and political change through their words and activism. In the 'Titans' section, Gabrielle Union shared a cover with her husband Dwayne Wade. Tarana Burke, the originator of the #MeToo movement, wrote that Union’s visible support of the LGBTQ+ community has changed social discourse surrounding these identities.

Mackenzie Scott also made the list because of her massive amounts of wealth redistribution after divorcing billionaire Jeff Bezos. She has already redistributed $1.7 billion dollars to 116 organizations and she says, “I will keep at it until the safe is empty.” Lisa Nishimura brought “Tiger King,” “Salt Fat Acid Heat” and “Making a Murderer” to our screens by virtue of her role as the vice president of independent film and documentary features at Netflix. She has molded and produced most of the viral content of the past year.

">.@TaranaBurke on @itsgabrielleu: “She is intentionally directing her attention, influence and resources to advance an agenda that deliberately celebrates the most marginalized among us, including Black women and girls and queer and trans folks” #TIME100 https://t.co/yuh7h2qWr0 pic.twitter.com/FurfdTfQRy

The final section entitled 'Icons' held the story of Bilkis, an 82-year-old Indian woman who sits in silent protest everyday in New Delhi to protest prime minister Narendra Modi’s Citizenship Amendment Act which discriminates against Muslim people trying for Indian citizenship. Bilkis promised,  “I will sit here till blood stops flowing in my veins so the children of this country and the world breathe the air of justice and equality.”

The 'Icons' section also included the stunning cover of Alicia Garza, Patrisse Cullors and Opal Tometi (header photo) who are the founders of the Black Lives Matter movement. Trayvon Martin’s mother, Sybrina Fulton, wrote lovingly about the three women and how their activism made her feel less alone while experiencing her devastating loss. She wrote, “We can’t give up. Patrisse, Alicia and Opal won’t.”

The "Silence Breakers" Are Time's Person Of The Year

Angela Merkel Is Time's Person Of The Year, Only The Fourth Woman

Tags: BLM , TIME100 , activism , feminism , Michaela Coel , Indigenous rights , LGBTQ+ , Netflix
Support Feminist Media!
During these troubling political times, independent feminist media is more vital than ever. If our bold, uncensored reporting on women’s issues is important to you, please consider making a donation of $5, $25, $50, or whatever you can afford, to protect and sustain BUST.com.
Thanks so much—we can’t spell BUST without U.