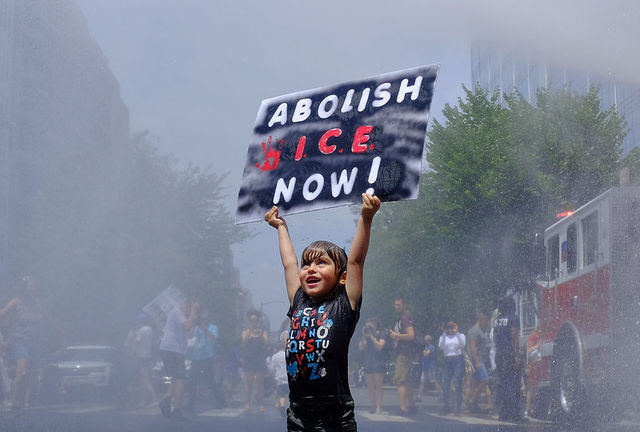 According to a complaint sent to the Department of Homeland Security, an immigration detention center in Georgia has subjected an overwhelmingly high number of women to undergo hysterectomies and is failing to protect employees and detainees from Covid-19.

Several legal advocacy groups filed the complaint on behalf of Dawn Wooten, a nurse of ten years and former employee of an Immigration and Customs Enforcement facility in Georgia, and several detained immigrants.

Forced sterilization is a cruel tool of white supremacy with a long, abominable history in this country.

We need a Congressional investigation into these heinous human rights abuses immediately.https://t.co/doWnF2OC0m

The complaint, filed on September 14, accuses the center of negligence and states that there have been numerous accounts of "jarring medical neglect" at the Irwin County Detention Center in Ocilla, Georgia. The center is run by the private prison company LaSalle South Corrections and houses people detained by Immigration and Customs Enforcement (ICE). This center has been reported before for poor treatment of detainees, including unsanitary conditions, serving spoiled food, and refusing medical care to detainees.

In interviews conducted with Project South, a non-profit based in Georgia, Wooten expressed that the frequent rate of hysterectomies raised red flags for herself and other nurses, stating, "We've questioned among ourselves like goodness he's taking everybody's stuff out…That's his specialty, he's the uterus collector. I know that's ugly…is he collecting these things or something...Everybody he sees, he's taking all their uteruses out, or he's taken their tubes out."

Wooten explained, "He's even taken out the wrong ovary on a young lady [detained immigrant woman]. She was supposed to get her left ovary removed because it had a cyst on the left ovary; he took out the right one. She was upset. She had to go back to take out the left and she wound up with a total hysterectomy."

Beyond this, Wooten told Project South that some detained women expressed that they did not fully understand why they had to get a hysterectomy. The report states that the sick call nurse tries to communicate with detained immigrants by googling Spanish or asking other detained immigrants to help interpret rather than using the provided language line.

The organization has filed reports about this center previously and now say, "The pattern of lack of medical care and unsanitary conditions at ICDC has only worsened in light of COVID-19."

Wooten also alleges that both many detained immigrants and staffers at Irwin have only received one mask each since the pandemic broke out. One detainee in the report states, "There is no social distancing. We're in an open dorm room. Our beds are nothing but three feet apart. We don't understand how we're supposed to do that…our living space is so small…"

The center also participates in a practice called "cohorting," in other words, isolating multiple people with COVID-19 together as a group due to a limited number of individual cells for fourteen days. However, the CDC does not recommend this practice. Wooten states that if an entire unit is cohorting for fourteen days, ICDC will put a new individual in a room with an individual who had already been quarantining for several days. Instead of restarting the quarantine period back to the beginning (14 days), the center only requires the new individual to isolate for the remaining days of the original cohort.

The fact of the matter is the United States has engaged in a program of mass human rights violations targeting immigrants.

Our country must atone for it all. https://t.co/KaacDaww5t

Azadeh Shahshahani, a human rights attorney at Project South, stated, "For years, advocates in Georgia have raised red flags about the human rights violations occurring inside the Irwin County Detention Center," she said. "Ms. Wooten's whistleblowing disclosures confirm what detained immigrants have been reporting for years."

Yesterday, House Speaker Nancy Pelosi called for an investigation into Wooten’s allegations. In a statement, she said, “If true, the appalling conditions described in the whistleblower complaint – including allegations of mass hysterectomies being performed on vulnerable immigrant women – are a staggering abuse of human rights,"