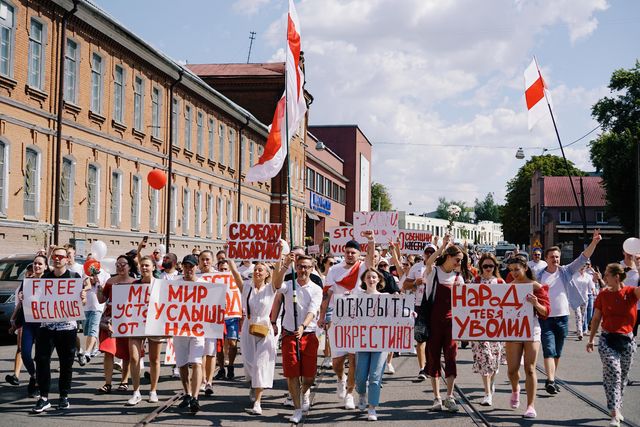 On September 13th tens of thousands marched in Minsk on the eve of Alexander Lukashenko’s visit to Russia to meet with Vladimir Putin. This protest is one of many that has occurred in the last month where the women-lead Belarusian protest group called The Women in White takes a leadership role.

These women-led protests continue to flood the streets of Minsk and other Belarusian cities in opposition to the unfair election of Lukashenko and continued police brutality. The United Nations has reported that an estimated 6,000 people have been subjected to detention because of these protests, and in some cases, torture by Belarusian security agents.

According to rferl.org, an independent European news source, heavily armored vehicles accompanied by troops were seen parked along some central streets in Minsk; The Interior Ministry claimed they were a violence prevention measure. However, riot police were seen in Minsk knocking peaceful demonstrators to the ground and dragging them away into police vans. The Interior Ministry reported that more than 400 people had been detained by nightfall.

36 days of protests in #Belarus. When a picture is worth a thousand words. pic.twitter.com/qeMvvVUt1l

To further push the clear and uncensored sexism of the Belarusian government, the Interior Ministry commented, “It’s a shame to watch: screams, screeching… Such behavior is unfeminine.”

Despite these laughable and unfortunate comments, the most prominent oppositional figures to this government continue to be women, including exiled Presidential candidate Svyatlana Tsikhanouskaya, Maria Kolesnikova, and Veronika Tsepkalo.

There is still hope among the protestors that are often echoed in international media. The Atlantic reported on the protests, affirming, “The moment demonstrates a trend in global mass movements: Protests that feature women are typically larger, less violent, and more versatile than those that do not. Most important, they are also more likely to succeed.”

Who Are Belarus' "Women In White"?

Why Native Activists Are Decolonizing COVID Relief on Reservations

Denmark's New Law Against Sexual Violence Is A Huge Step

Tags: Women in White , Belarus , protest , elections , police brutality , elections , protesting , Police Brutality
Support Feminist Media!
During these troubling political times, independent feminist media is more vital than ever. If our bold, uncensored reporting on women’s issues is important to you, please consider making a donation of $5, $25, $50, or whatever you can afford, to protect and sustain BUST.com.
Thanks so much—we can’t spell BUST without U.