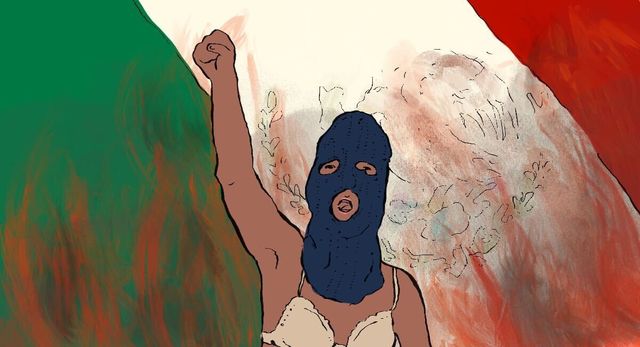 Need some good news today? (Whatever that means)... A badass feminist collective in Mexico City has taken power into their own hands by seizing the headquarters of the National Human Rights Commission (CNDH) and converted it to a shelter for victims of gender-based violence in Mexico City, Mexico. Let me hear you say, Power to the People!

According to the Mexico News Daily, frustrations and tensions between feminists and the Mexican government continue to swelter as women are continually left ignored and unprotected after reporting gender-based violence. The Ni Una Meno (Not One Woman Less) Collective took over the office building on Thursday, tearing down the building’s sign and replacing it with a banner reading, “Ni Una Menos Mexico Shelter House.”

Feminists take over human rights office, claim inaction on women’s rights and have converted the Mexico City offices into a women's shelter https://t.co/pbgVbpqK2C

From an interview in El Universal newspaper, Yesenia Zamudio, a collective member and surviving family member whose daughter was a victim of femicide, said, “We’re more suitable … for these premises than the parasitic people who were here before. We’re going to provide … legal advice and even accompany [women] to prosecutor’s offices.”

Zamudio affirms the shelter will welcome women from other parts of the country, whether they are victims themselves or family members affected by femicide or other gender-based crimes. Their goal is to provide care for victims and family members without the worry of payment.

The mothers of victims of forced disappearance & women from feminist collectives have take over taken over the National Human Rights Commission (CNDH) in Mexico City. If their demands continue to be ignored, they’ll call for a national takeover of all state offices. Solidarity!?? pic.twitter.com/7jTmU86peL

According to the collective, the last five days since seizing the building, an estimated 100 survivors have arrived in search of legal advice, shelter, and psychological care, all of which are being provided by professionals belonging to the collective.

Neztli Granados, a member of the collective, who reported six weeks ago her ex-partner kidnapped her daughter, contacted authorities, including the CNDH, and both failed to investigate the case. Granados said, “There’s no other choice, the CNDH has never spoken out in favor of our rights, the rights of victims of femicide and of children. We have no choice but to form a front and [try to] seek justice.”

Story art: Gabriella Shery is an illustration, graphic designer, and comic artist from Brooklyn, New York. You can find her work on Instagram at @gabshery, or on her website.

Why Is Poland Getting Rid of Protections Against Domestic Violence

Who Are Belarus' "Women in White"