WTF: Trump Told Sarah Sanders To “Take One For The Team” After Wink From Kim Jong-un 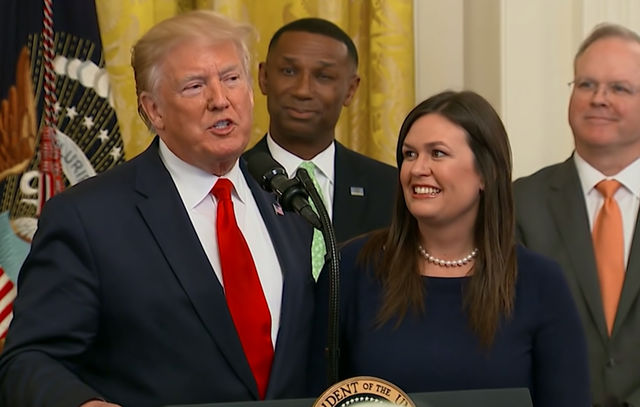 Damn, Donald! Back at it again with the predatory behavior. Over the past four years, Donald J. Trump has become known for his “locker room talk.” From his infamous “grab 'em by the pussy” line to talking about how he’d like to date his own daughter, his misogynistic rhetoric doesn’t really surprise your average feminist at this point. Still, with just two months until election day, one would think that there wouldn’t be much time for Trump to sneak in any more jaw-dropping, blatantly sexist statements, right? Well, think again.

Former press secretary Sarah Huckabee Sanders recently revealed that President Trump told her to “take one for the team” after North Korean dictator Kim Jong-un reportedly winked at her at a 2018 summit in Singapore. Yeah, you can feel free to read that over again. A phrase that should have never been uttered by a U.S. President in the first place, Trump’s remarks on the situation sound a lot more like what you might say when you spot someone eyeing your friend at the bar: “Kim Jong-un hit on you!” he supposedly joked. “He did! He fucking hit on you!” Trump proceeded to tell Sanders that she would have to “go to North Korea and take one for the team,” which we can only assume means sleeping with a dictator for...the sake of America?

*Sees why Sarah Sanders is trending*

Don’t worry though, the now viral comments from President Trump get so much worse. After essentially telling her to slide into Jong-un’s DMs in the name of the United States of America, Trump stated “your husband and kids will miss you, but you'll be a hero to your country!" The conversation unfolded while Sanders, Trump, and the then chief of staff, John Kelly, were riding back from the summit to the airport in a limo. It sounds as though Trump taunted Sanders after she told him about the North Korean leader’s wink, and that Kelly egged him on. “Sir, please stop,” Sanders replied to Trump's comments. She noted, however, that the president and chief of staff proceeded to howl with laughter for the remainder of the car ride.

These reports on behalf of Sanders come in the form of her new memoir, Speaking For Myself, which comes out this Thursday. It would be valid to assume that Sanders’ memoir is some kind of tell-all, exposing heinous truths about Trump and his administration. According to The Guardian, however, it’s quite the opposite. Martin Pengelly described the memoir as a “paean to the president by a loyal follower with the subtitle Faith, Freedom and the Fight of Our Lives Inside the Trump White House.” This leads one to assume that Sander’s recounting of the events at the 2018 summit were not meant to shock and horrify the masses, but perhaps to showcase a fond, comedic memory between her and the president.

While the initial shock of realizing this morning’s news was not a headline from The Onion gave way to quite a bit of laughter on our behalf here at BUST, the story is not exactly innocent nor is it funny. At the very least, the president’s comments about Sanders and Kim Jong-un are just the latest in a long and disturbing line of Trumpisms that aim to degrade and objectify women.

What's Up With The Conways?

Tags: Donald Trump , Trump , President Trump , Sarah Sanders , Sarah Huckabee Sanders , John Kelly , Kim Jong-un , predatory , sexism , misogyny
Support Feminist Media!
During these troubling political times, independent feminist media is more vital than ever. If our bold, uncensored reporting on women’s issues is important to you, please consider making a donation of $5, $25, $50, or whatever you can afford, to protect and sustain BUST.com.
Thanks so much—we can’t spell BUST without U.