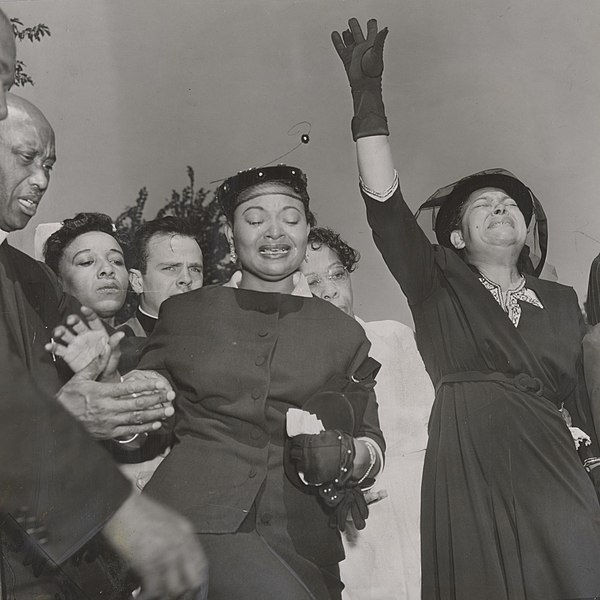 Today is the 65th anniversary of Emmett Till’s lynching.

On August 28, 1955, Emmett Till, a 14-year-old Chicagoan visiting family in Money, Mississippi, was violently lynched for allegedly flirting with a white woman a few days earlier. Four days prior, shop owner Carolyn Bryant claimed that Till flirted with her while in her store, with different accounts claiming different things on Till’s part. Four days later, Roy Bryant—Carolyn’s husband—and his brother J.W. Milam showed up at Till’s uncle’s home, demanding to see him.

According to History.com, the pair dragged Till out of the house and into their car. Till was found dead in the Tallahatchie River three days later, unrecognizable from beatings, having an eye gouged out, a bullet in the head, and a 75-pound cotton gin tied to his neck with barbed wire.

Milam and Bryant were both acquitted by an all-white jury after just an hour of deliberation. Carolyn Bryant later confessed that she lied about Till coming on to her, claiming he never touched, threatened or harassed her, according to History.com.

Till’s mother, Mamie Till Mobley, insisted that Till’s funeral be open casket so that the world could see what they had done to her son—“Let the people see what I have seen.” The images shared of Till’s body, unrecognizably swollen and broken, became part of the massive push for Civil Rights in the '60s.

A feature film about Till’s death and Mobley’s work telling his story will be directed by Clemency director Chinonye Chukwu. Production is scheduled to start in 2021, coinciding what would have been Till’s 80th birthday.

“I am deeply honored to be telling this story and working with such an incredible producing team,” Chukwu said, according to Deadline. “Amidst the pain and brutality that is inherent to Mamie and Emmett’s story, I intend to delve deeply into their humanities, the love and joy they shared, and the activist consciousness that grows within Mamie as she seeks justice for her son.”

Till’s story is especially relevant today, as we are still seeing violence against innocent black men like Jacob Blake and George Floyd and the heroization of violent white men, like Breonna Taylor’s murderers—who still haven’t been charged—or Kyle Rittenhouse, who killed two at a BLM protest and was welcomed by police and called a hero on Fox News.

The violence has changed, but it is still undeniably targeted at Black Americans simply for their skin color.

At 14 years old, Emmett Till was abducted, beaten & lynched by white supremacists—only 65 yrs ago.

There are still sitting U.S. Senators who don’t think lynching should be a federal crime.

We must uproot the systemic racism that killed Emmett & kills Black Americans every day.

Friday marks the 65th anniversary of the lynching of Emmett Till. pic.twitter.com/LNP4sm9hfx

65 years after Emmett Till was lynched and deprived of justice, Jacob Blake was shot 7 times in the back.

He’s paralyzed and handcuffed, yet the police officer who shot him is free.