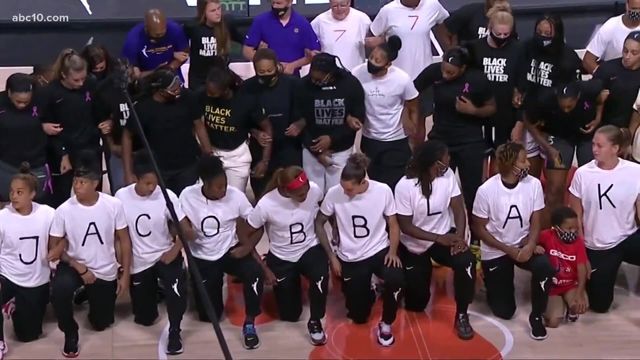 The Black Lives Matter protests were ignited earlier this year following the death of George Floyd, and the protests have started again after the police shooting of 29-year-old Jacob Blake in Kenosha, Wisconsin. Blake, who was shot multiple times in the back, was left paralyzed, and his lawyer said it would be a miracle if he ever walked again.

This shooting has sparked new outrage and it has led the WNBA to postpone their game in order to make a statement about the shooting of Blake and deaths of Black people at the hands of the police. The players of the league knelt at half court and wore t-shirts that spelled out Blake’s name. The WNBA decided to boycott the games in order to bring awareness and demand change. The four teams who are in the playoffs this season — the Washington Mystics, Atlanta Dream, Minnesota Lynx, and Los Angeles Sparks — were set to play but decided to not continue with the games.

This is powerful. @WNBA players linked arms and took a knee while wearing shirts that spelled out Jacob Blake. No WNBA games will be played tonight. pic.twitter.com/2vpGkefRmA

Elizabeth Williams, who plays center for the Atlanta Dream, gave a statement on behalf of the WNBA players. “The consensus is to not play in tonight’s slated games and to kneel, lock arms, and raise fists during the National Anthem,” Williams said of the strike. “We stand in solidarity with our brothers in the NBA.”

"The consensus is to not play in tonight's slate of games and to kneel, lock arms and raise fists during the national anthem."

The Atlanta Dream’s Elizabeth Williams reads a statement announcing that the WNBA will not play in tonight’s games. pic.twitter.com/HRoLbCS4SN

Williams said that they have an opportunity to demand change through this strike and encouraged everyone to vote and to complete the census. “We will continue to use our platform to speak of these injustices that are still happening and demand action for change. Black Lives Matter. Say her name, say his name. Tonight we stand and while we have heavy hearts, we stand with strong and determined voices and ask all our fans to vote, to engage, and to make that difference,” Williams concluded.

The WNBA players aren’t the only women going on strike. Japanese tennis champion Naomi Osaka also announced that she will not be playing in the semifinals today. Osaka made a statement to Twitter about her decision where she said, “Before I am an athlete, I am a black woman. And as a black woman, I feel as though there are much more important matters at hand that need immediate attention, rather than watching me play tennis.” Osaka went onto acknowledge that she doesn’t “expect anything drastic to happen with me not playing, but if I can get a conversation started in a majority white sport, I consider that a step in the right direction.”

Other sports organizations have decided to strike as well. Most notably the NBA who are also currently in the playoffs season. Clippers coach Doc Rivers gave a powerful statement about being Black and voiced his support for Black Lives Matter. In his statement, he said that we must demand better, and poignantly noted, “We keep loving this country, and this country does not love us back.”

Blake’s shooting, along with the previous Black Lives Matter protests we saw earlier this year, has sparked new conversations and hopefully change. The widespread support for Black Lives Matter is a step in the right direction, but we must do better, and the voices of people like the WNBA athletes and Osaka are helping us demand more.