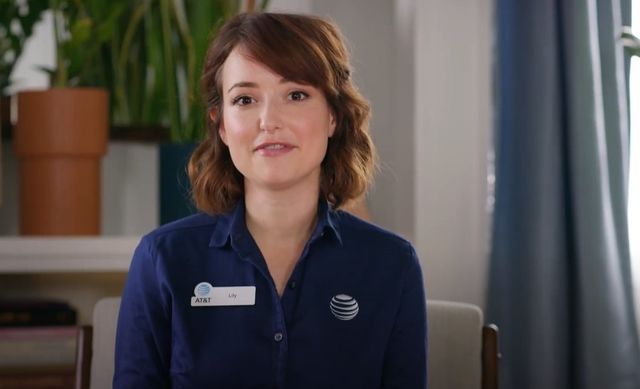 Milana Vayntrub might not be a name that you recognize, but you’ve probably seen her before. Since 2013, she has been appearing in AT&T commercials as Lily, a saleswoman. While she is best known for her commercial work, she has also appeared on This Is Us and is also the voice for Squirrel Girl on Marvel's New Warriors. Recently, Vayntrub has been appearing in AT&T commercials again and has gotten a lot of gross comments. Many people have begun sexualizing her in the comments of her posts and the AT&T posts on Instagram. A lot of the comments have to do with her breasts.

This understandably did not sit well with Vayntrub who went onto Instagram Live, and said that the comments around her breasts hurt her feelings and brought up feelings of sexual assault.

this is so sad. she (the at&t girl) is talking about how she’s uncomfortable with being sexualized and people r making sexual comments about her chest. what the fuck. pic.twitter.com/LKFNQeFwo3

A user on her IG live commented that it would go away in a month as many memes do, but that doesn’t change the fact that it’s hurting her right now. Another commented that letting people know that she was hurt just gave them an incentive to do it more, which might have some validity to it, but it doesn’t make it right. It’s important for her to speak up about her experience as a woman in the entertainment industry and on the Internet, and hopefully, her speaking about this problem will open up the door for bigger conversations.

quences on the mental health and overall well-being of the women we consistently choose to objectify. on her live vayntrub also talked about how she felt widely unsafe simply walking her dog thanks to all the hyper-sexual comments she was getting.

The harassment also went onto AT&T’s own Instagram page where a video was shared and there were several comments talking about Vayntrub’s “milkers.” This led AT&T to disable the comments but not before replying to a few of them, telling one commenter in particular, “We don’t condone sexual harassment of employees in the workplace or on our social media channels.”

The sexual harassment Vayntrub is facing is not okay and should not be something that simply comes with the territory of being a public figure. We need to call out sexual harassment and make sure that everyone knows it’s unacceptable. So many people are excusing this because she has posted photos with cleavage before, but that wasn’t an invitation for anyone to sexually harass her. Victim blaming those who face sexual harassment is wrong, and it doesn’t help anything but further a culture where the onus falls on the victim instead of the perpetrator.

Vayntrub has since had to limit who is able to comment on her Instagram posts because of the harassment.

Online Harassment Is An Epidemic. Meet The Women Working To Stop It