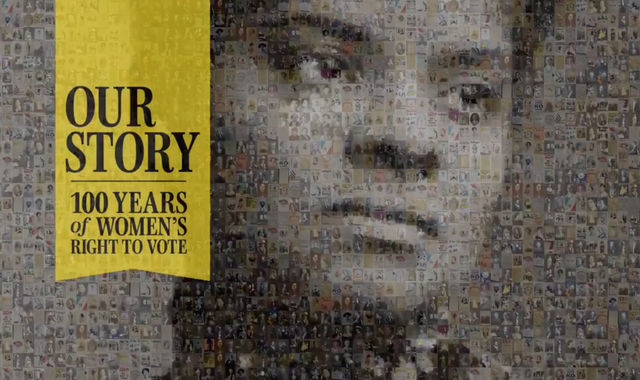 Investigative journalist, civil rights leader, and suffragette Ida B. Wells is being honored in a temporary art installation at Union Station in Washington D.C. next week. The ode to Wells comes in the form of a 1,000 square foot mosaic. As a way to commemorate 100 years of women gaining the right to vote, the portrait of Wells will be made up of hundreds of other women who fought in the suffrage movement.

A huge new Ida B. Wells mosaic in Union Station will honor the 19th Amendmenthttps://t.co/zt5GQTd9Jx pic.twitter.com/d7jj9rYb8G

Union Station was chosen as the location for the mosaic, which is titled “Our Story: Portraits of Change,” due to its significance to the women’s suffrage movement. In 1919, it was where suffragettes who had been jailed for picketing began their train tour across the nation. BET notes, however, that the location of a train station is a rather fitting place to honor activist Ida B. Wells as well. In 1884, Wells famously refused to move from the first class, ladies’ section of a train (which she had purchased a ticket for), to the smoking section. The train crew forcibly removed her, leading Wells to take legal action and subsequently be awarded $500 when she successfully sued the Chesapeake and Ohio Railroad Company. Unfortunately, the railroad company appealed the verdict to the Tennessee Supreme Court, who reversed the decision. This led Wells to recount her experience in a Black church newspaper called The Living Way, both spreading awareness about this kind of discrimination and kicking off her career as a writer.

Before becoming a pioneer for women in journalism, Wells worked as an educator. But after this incident, and after a close friend of hers was lynched by a white mob, Wells began investigating the reasons behind why so many Black men were being targeted and lynched at the time. She went on to publish her findings in a pamphlet and in several newspaper columns, and even travelled abroad to spread further awareness about lynchings in America. Later in life, Wells founded the National Association of Colored Women’s Club, where she advocated for both civil rights and women’s suffrage, and openly confronted white women working in the suffrage movement who actively ignored lynching and other civil rights issues.

On the centennial anniversary of the #19thAmendment’s ratification, I'm honoring Black women like Ida B. Wells, Sojourner Truth, and Mary Church Terrell whose voices were sidelined by women like Susan B. Anthony and Elizabeth Cady Stanton.

Designed by artist Helen Marshall of the People's Picture and produced by Christina Korp of Purpose Entertainment, “Our Story: Portraits of Change,” is meant to honor all the women who fought tirelessly for women’s right to vote a century ago. As Korp stated, "We are so proud to highlight and honor Ida B. Wells as the main subject of the Our Story photo mosaic. Her story as a suffragist, civil rights activist and investigative journalist is as relevant today as it was 100 years ago." The mosaic will be up on the floor of Union Station from August 24 to August 28. While travelers will be able to get an up close viewing of the art installation, a digital version will be available online where people can zoom in on each photo and learn about all the women who are featured.

Although it is incredible that Wells and so many other prominent feminists will be honored in this way, it is disappointing that the mosaic will be up for such a short amount of time, especially considering that Union Station is likely experiencing significantly less foot traffic than it normally would during this time of year due to the ongoing pandemic. Ida B. Wells is an important figure in our nation’s history for so many reasons; let us not forget that she was also present at the founding of the NAACP. This summer, the U.S. reckoned with the fact that there are numerous monuments around the country, and specifically in the D.C. area, that honor historical figures with racist legacies. In a call for more representation for the Americans who fought for women’s rights, civil rights, and so many other marginalized groups, it seems only right that Wells be honored in a permanent monument in the nation’s capitol in the future.

Top photo: screenshot via The Peoples Picture on Twitter