Who Are Belarus' "Women in White"? 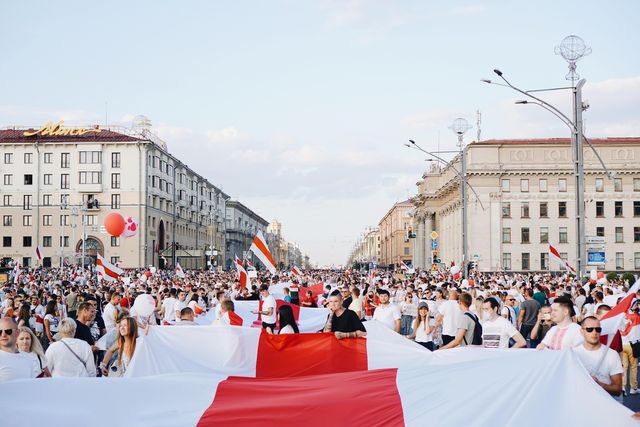 Over the past few weeks, Belarus has witnessed an unprecedented amount of resistance as citizens protest police brutality and the controversial election of dictator President Alexander Lukashenko, who has ruled for the past 26 years. At the forefront of these rallies are thousands of women who have organized themselves into a leaderless movement that is sweeping across the country: and they’re calling themselves “the Women in White.”

In the violent upheaval following the recent election, in which Lukashenko was named the winner in a vote that the EU and US condemned as neither free nor fair, Belarus authorities have reported that the protests have yielded approximately 6,700 arrests and at least two deaths. To defend themselves against this violence and bear a message of peace, the Women in White have made their peaceful intentions clear by flooding the streets of Minsk by the thousands in white T-shirts, handing out white ribbons and flowers.

'"I want to live in a country where I can be sure my son comes home safely every night," says Natalia Skibska whose son was arrested, beaten and jailed for six days. She has joined the "Women in White' protests callling for change #She4Belarus . https://t.co/KahcPiSdIN

Belarus’ dictatorship has been notoriously hostile towards women for decades. This year, in regards to the election, Lukashenko said “Our constitution is not for women..Our society has not matured enough to vote for a woman. This is because by constitution the president handles a lot of power.”

Belarusian women are certainly proving the opposite. When several presidential candidates were forced to flee or were arrested in the run-up to the election, Sviatlana Tikhanovskaya, wife to one of the candidates, took up the cause. With two other women, she began a campaign for free and fair elections.

The Women in White have thrown their support behind the trio. Even the factory workers of Lukashenko’s pet project, Minsk Tractor Works, chanted “Sveta” at a recent protest. The demonstrators have also launched a social media campaign with the hashtag #she4belarus, urging others to join the fight.

Belarusian women from the whole world made a video with an appeal to the international community and to demonstrate solidarity with the Belarusian people fighting for freedom and truth. #She4Belarus #беларускі_супраць_дыктатуры #беларуски_против_диктатуры pic.twitter.com/NqfOvdML3S

“The three of us were able to show that we had taken responsibility for what is happening and for the future of Belarus.” Maria Kolesnikova, a member of this trailblazing trio, said in an interview in central Minsk this past week. “The West won’t help, Russia won’t help, we can only help ourselves. Our female faces became a signal for all women – and for the men too – that every person should take responsibility.”

Tags: Belarus , women , protesting , women in white , protesting , protest
Support Feminist Media!
During these troubling political times, independent feminist media is more vital than ever. If our bold, uncensored reporting on women’s issues is important to you, please consider making a donation of $5, $25, $50, or whatever you can afford, to protect and sustain BUST.com.
Thanks so much—we can’t spell BUST without U.