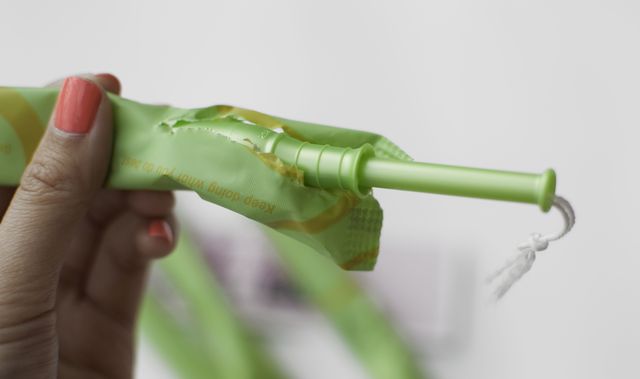 In the UK, Tampax recently released a new television ad campaign which shows viewers how to properly insert a tampon. This ad campaign, dubbed “Tampons and Tea,” was launched after Tampax did research and came to the conclusion that 42 percent of tampon users were not inserting it correctly. The number jumps higher to 58 percent in the age bracket of 18- to 24-year-olds.

The ad features a fictional daytime show where the host asks the question, “How many of you ever feel your tampon?” After a guest raises her hand, the host says that you shouldn’t feel your tampon and it might mean that it’s not in far enough. The ad then shows a demonstration of how to insert the tampon. The host then says, “Get em up there, girls!”

With Tampax’s research, we know that nearly half of the tampon-using population doesn’t insert their tampons correctly. This can lead to mild discomfort or severe pain. It is important that we teach young people how to wear tampons, especially when we have such a stigma around periods.

It was refreshing to see a straightforward tampon commercial where there was no beating around the bush about periods or tampons. It’s also refreshing because most ads about period products usually feature girls smiling and having the best time on their periods, dancing around. Most of us know that this isn't typically the case, especially those who are severely affected by PMS. While this advertisement had a smiling woman, it didn’t come off in the patronizing way that tampon advertisements usually do.

The Advertising Standards Authority for Ireland (ASAI) got several complaints about the advertisement. According to the complaints, the ad was disrespectful to women, had sexual innuendos, and was not suitable for children.

Many were upset with the fact that the Tampax commercial aired during the show Britain’s Got Talent, arguing that it shouldn’t have been shown on such a family-friendly television program. One user on Twitter wrote that, “The new Tampax ad is just a step too far. ‘Get them up there, girls.’...The ad is digusting...no issue with the advertising the product, just the way it’s done.” Many people also complained that there were kids watching during the show which made the ad inappropriate.

There were, in fact, others who found the advertisement to be helpful. People mostly found it helpful because it talked about periods and tampons in a candid way, despite the negative connotation surrounding them.

Unfortunately, the advertisement was pulled from Irish television. The Advertising Standards Authority’s Complaints Committee stated that the ad caused “widespread offense” while also taking note that it “provided factual information in a manner that was neither explicit nor graphic.”

The pulling of this advertisement works against everything that the advertisement was praised for: helping women know their bodies and taking the shame away from menstruation. Too often, young people in particular are too scared to ask questions about their periods and resort to practices that end up causing them more harm.

Charlotte Amrouche hosts educational workshops on menstruation and stated that the ASAI’s decision was “disappointing and hugely frustrating.” Amrouche said that the decision “suggests that vaginas, periods and period products, are all offensive.” She also said that the advertisement was needed because there is misinformation and a lack of knowledge when it comes to period products in Ireland.

While Tampax did pull the ad in line with the ASAI’s decision, a spokesperson for the company said, “Our advert was designed to address a very common usage question and to help educate how to use the tampon correctly in a straight-talking way. ... We will continue in our efforts to normalize periods and help end period stigma.”

Ending the stigma around periods is so important, and something that needs to be talked about more. The shame young women feel about something that is natural and that they can’t control is absolutely ridiculous. Even if little kids were watching the advertisement, it could’ve helped a young person who was too scared to ask how to use a tampon. The advertisement could also help the (apparently large number of) people that don’t know how to insert a tampon correctly. We need to start talking about menstruation in a productive way, just like this advertisement did, period.

This Indian Company Offers Menstrual Leave To Its Employees -- Is It Helping Or Hurting?