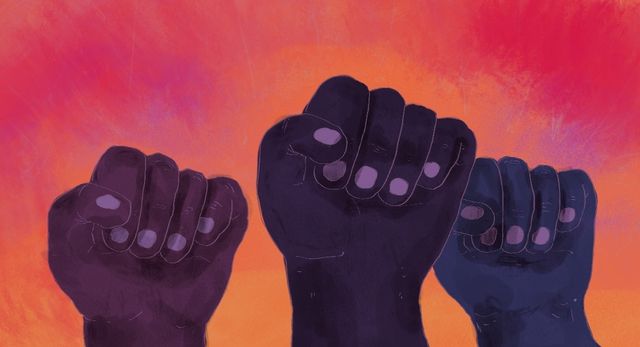 If you haven’t heard about Black August, it’s a month that commemorates the Black revolutionaries who dedicated their lives to fighting white supremacy, capitalism, and colonialism. It began in the 1970s during a California prison rebellion to pay tribute to the murder of George Jackson, a revolutionary, author, and Black Panther member. He was killed on August 21, 1971, by prison guards during a rebellion at San Quentin Prison. His brother, Jonathan Jackson, was murdered a year earlier during a mission to liberate the Soledad Brothers on August 7th, 1970.

The important thing about Black August, though, is that it’s rooted in revolution. On Twitter, rapper and poet Noname writes “blk history month is beautiful but unfortunately like all black culture it has been co-opted by neoliberal capitalists and we rarely learn about all the contributions black radicals have made in resistance against this settler colonial nation state.” Like most revolutionary history, indeed it has.

blk history month is beautiful but unfortunately like all black culture it has been co-opted by neoliberal captialist and we rarely learn about all the contributions black radicals have made in resistance against this settler colonial nation state. we don’t

August is also a marker of historically significant moments in Black history. The Haitian Revolution, Nat Turner’s Rebellion, the Fugitive Slave Law Convention, the formation of the Underground Railroad - as well as the Watts Uprising and the March on Washington - happened in August. More recent events like the Ferguson Uprisings occurred in August and Black revolutionaries like Marcus Garvey and Fred Hampton share August birthdays.

Besides studying the lives and histories of revolution, the act of celebration can be traced back to folks incarcerated by the California prison system. Rachel Herzing states “there was an idea that this could be a time that imprisoned people... could use for reflection, study, and to think about how to strengthen their struggles. During the month, people wouldn’t use radios or television, would fast between sun up and sun down, and practice other measures of self-discipline.”

Many Black folks still maintain this tradition of reflection and sacrifice in a number of ways. The Noname Book Club's “Black August Booklist” has a great selection of works from a number of Black revolutionary writers ranging from Octavia Butler to Assata Shakur. On Twitter, the Movement 4 Black Lives writes “There are many ways to participate, from reading books to hosting a political education event or a book club as a community practice with other Black people. These too, are acts of resistance.”

Join us in collective community action this month. There are many ways to participate, from reading books to hosting a political education event or a book club as a community practice with other Black people. These too, are acts of resistance. Visit https://t.co/QvoHa8CNWq.

Black Feminist Future and Black Women Radicals will be honoring the Black feminist tradition this month through study, reflection, and community building. They have a practice for each day of the week, ranging from self-care Saturdays to writing a letter of appreciation to a Black political prisoner.

Let's practice, study, and reflect together. Join me. #BlackFeministBlackAugust

It should go without saying that these events are made by and for Black people, but white folks can stand in solidarity through education, donating money to individuals and organizations, and most importantly, giving up power. And since we should always center Black women and femmes, check out the thread below from Black Women Radicals detailing the events they’re hosting this month!

For #BlackAugust, we are focusing on Black Feminist Political Education. Check out a thread of some of our events [more to be announced]??