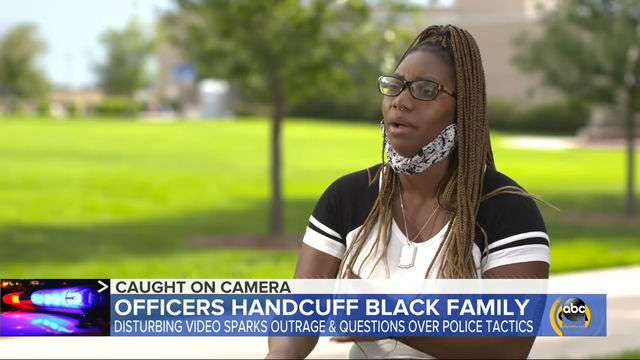 On Sunday, August 3, Aurora resident Brittney Gilliam was with her 6-year-old daughter, 12-year-old sister, and her 14- and 17-year-old nieces. Gilliam told CNN in an interview that she was taking everyone to get their nails done that day. Gilliam and all of the four children are Black.

Things didn’t go as planned because police officers from the Aurora Police Department ordered the four children at gunpoint to lie facedown on the parking lot while two of the children and Gilliam were handcuffed. They were handcuffed while the police worked to confirm that the car they were driving in was not stolen. Gilliam said that the police would not tell her why she was being pulled over until she was already handcuffed.

In a video taken by a bystander that was spread around social media, you can see the girls cry. Between sobs, one called out, “I want my mother.” This cry out was eerily reminiscent of George Floyd who also called out for his mother. You can also hear one of them ask, “Can’t I have my sister next to me?” The video is quite disturbing to watch as you can hear the distress in all of the children’s voices as they sob and scream.

The bystander who shot the video, Jennifer Wurtz, said on camera that the police drew their guns as they were approaching the car. She also told the officers that the children were scared and asked to speak to them; she was told that she needed to back up and she was interfering with an investigation.

Gilliam said, “If you wanted to place me in handcuffs at that point, I would have gladly agreed to that because you had a job to do and you did it under the right protocol, but you pointed a gun at four kids and then you proceeded to start handcuffing the kids.”

The incident was a mistake, as the car was not stolen. In a Twitter statement on Monday night, the Aurora PD intern chief said that the car that Gilliam was driving matched the license plate number and description of a stolen vehicle, but it turns out that there was a crucial error - there was a stolen vehicle with the same description and license plate number but it was from a different state.

The car had also been stolen before in February but it had been returned to Gilliam, and she offered to show the paperwork to prove that the car was hers. In the statement, the Aurora PD said that once the car was confirmed not to be stolen, the police officers immediately unhandcuffed everyone, explained what happened, and apologized.

But Gilliam told the station, “There’s no excuse why you didn’t handle it a different type of way. You could have even told them ‘step off to the side let me ask your mom or your auntie a few questions so we can get this cleared up.’ There was different ways to handle it.”

The interim chief of the Aurora PD said that she reached out to the family to apologize and offer help, such as age-appropriate therapy that the city would cover. Drawing of weapons is the procedure for high-risk stops but the interim police chief says that she has directed her team to look at new practices and training after the events on Sunday. This incident is coming after the city’s inaction when it came to Elijah McClain’s death, a 23-year-old who died following an encounter with police almost a year ago.

The Black Girl Bill of Rights Needs to be Ratified

Tags: Aurora , Colorado , police brutality , Elijah McClain , racial justice , #BlackLivesMatter , BLM
Support Feminist Media!
During these troubling political times, independent feminist media is more vital than ever. If our bold, uncensored reporting on women’s issues is important to you, please consider making a donation of $5, $25, $50, or whatever you can afford, to protect and sustain BUST.com.
Thanks so much—we can’t spell BUST without U.