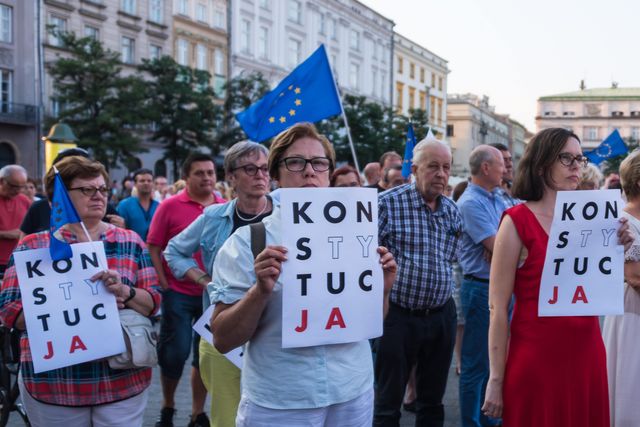 This past week, tens of thousands of demonstrators flooded the streets of Warsaw and other Polish cities with the outcry: “fight against the virus, not against women.” The protest follows the Polish government's plans to withdraw from a pan-European convention tackling violence against women. “The aim is to legalize domestic violence,” said Marta Lempart, one of the protest organizers said at a march last Friday.

The Istanbul Convention is a legal framework drawn by the Council of Europe (a human rights organization of 47 member states) aimed at reducing violence against women and girls. It strategized against domestic violence, rape, sexual assault, female genital mutilation, so-called “honor-based violence," and forced marriage.

It was ratified in 2015, a hair before the ultra-conservative Law and Justice (PiS) Party came to power. Following their election, the PiS party has focused on “rebuilding” the Central European state by dramatically restructuring Polish politics with an emphasis on Roman Catholic “family values.” The conservative party argues that the Istanbul Convention defies these values. The country’s justice minister, Zbigniew Ziobro, announced the Polish government’s decision to withdraw last week with the claim that the treaty was “harmful,” as it requires schools to teach children about gender -- which, apparently, infringes “the rights of parents.”

This decision is reflective of the political and ideological trend burgeoning within Poland. Once an epicenter of progressive democratic values, Poland has now come to represent strong anti-womxn, anti-LGBT sentiment following the election of the PiS party. Andrzej Duda, the Polish president who is backed by the PiS party, has argued LGBTQ+ rights are an “ideology more destructive than communism” and promised to outlaw same-sex marriage and LGBTQ+ adoption rights during his recent election campaign.

According to data collected by the activist-organization, Atlas of Hate, a third of Polish local municipalities have adopted resolutions “against LGBT propaganda” or “pro-family,” creating what rights groups describe as hostile spaces for anyone who is not heterosexual or committed to the so-called “natural family.”

Poland announces it will withdraw from the Istanbul convention, a treaty that protects women against violence, marital rape, and genital mutilation.

What’s more interesting is, Poland is host to one of the most restrictive abortion laws in Europe, in which having a pregnancy terminated is illegal except in cases of rape or incest or when a female’s life is at risk or if there is a severe fetal abnormality.

The decision to withdraw from the convention collides with an influx of campaigns around the globe to fight against the dramatic increase of domestic abuse during quarantine and social isolation measures. Protestors make clear the injustice with the ringing statement: “PiS is the women’s hell.”

Image via Külli Kittus on Unsplash