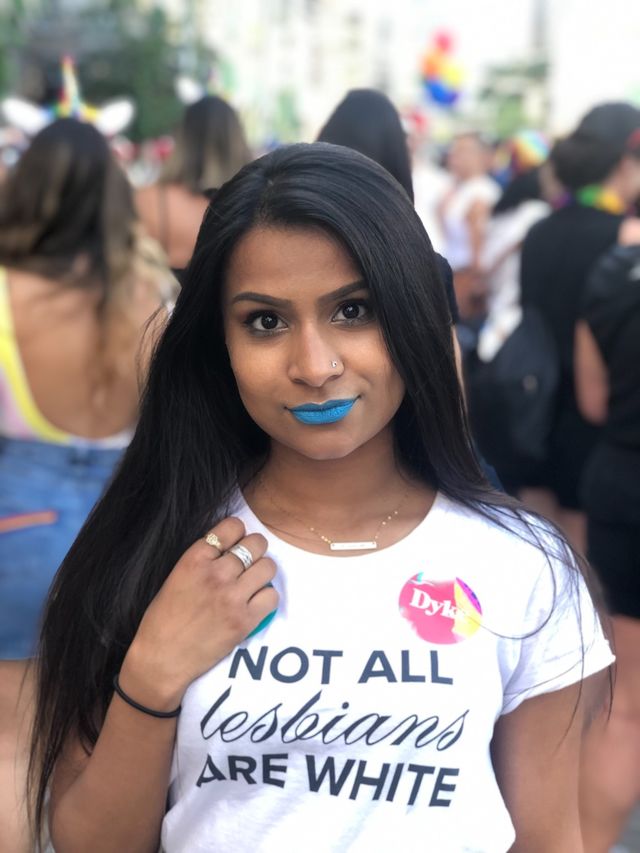 Alyy Patel is a LGBTQ+ activist and graduate student living in Canada. Her research includes “'Brown Girls Can’t Be Gay': Racism Experienced By Queer South Asian Women in the Toronto LGBTQ Community,” which was published in the Journal of Lesbian Studies in March 2019. Patel founded the Queer South Asian Womxn’s Network and was the first ever South Asian speaker at the 2020 Toronto Dyke March. She’s an overall badass paving the way for queer South Asians everywhere, and I was excited to talk to her about her research, her identity, and the QSAW.

Hi Alyy! How has quarantine been for you?

Quarantine’s been pretty good, just working a lot so it hasn’t really felt any different from pre-quarantine. I’ve been working on my thesis since January.

What is your current thesis looking into?

My current thesis is actually a follow up study on the finding of why South Asian queer women feel invisible. I am looking at how institutions are reproducing invisibility, specifically I looked at Pride Toronto and how their culture underpinning led to invisibility of broader queer identities. These institutions tend to hold up white ideologies.

It’s been such an interesting time for white women, especially marginalized white women, who are realizing for the first time that we are in a lot of spaces acting as an oppressor. Something I grew up thinking as a white lesbian was this idea of having to be out. I would love to hear your ideas about this notion that white people are obsessed with coming out and being out, often times without understanding the fatal dangers for other cultures of being out. What are your thoughts about coming out versus living closeted?

I think that’s a super important question. I’ve been trying to focus on the narrative of “out and proud” and how is discredits queer identities that aren’t out. It even discredits queer identities that aren’t out in every single space. I notice that many South Asian folks are living [queer lives] and we don’t tell our families that we’re out, but we’re out and queer in our social spaces, but that is seen by white lesbians as “you’re not fully out” and we get stigmatized and bullied out of our communities and safe spaces. Institutions reproduce this [idea] by really pushing “you need to be out and proud and waving a rainbow flag” without thinking about how it’s not safe [for everyone].

It sounds to me, and please correct me, what you’re really saying is we need to be more accepting of wherever people are in their journey and if their journey is “simply” identifying their sexuality and living what we white women consider closeted, that’s fine and we should find ways to support these people.

Yes, I think finding ways to support and being more culturally conducive in the ways in which we create spaces instead of policing sexuality. It can look like forcing your partner to come out before they’re ready or just being on a first date with someone and asking why they aren’t out and really pushing those questions instead of just being like, okay, this is chill. It is very clear that white women understand this in a lot of different dynamics, but it doesn’t translate to being out or in the closet in relation to South Asian womxn.

From the internet and social media, you personally appear to live a very out life, so what has your experience been like being a queer advocate?

It’s actually very interesting because all of my platforms look very different. My Facebook is where I have a lot of family, so I casually leave [my posts] as allyship. I don’t post about my personal queerness on [Facebook]. On my Instagram I am very out, and I make a deliberate effort to block aunties and relatives.

I would assume the more you keep building this network, you could start to feel the double sidedness of doing something important for the larger community while trying to keep yourself safe and secure in your own family community. Where are you with that today?

In all honesty, I think I could have already made a larger impact if I was supported by my family. I have had opportunities that I haven’t been able to take because they were way too out there, but I think I am now getting a lot more comfortable and [it helps that] I do research in this area. I had one relative ask my mom “is she gay?” but my mom can justify it with “no, she’s just doing the research.” I think that the researcher identity for me is a facade of “I’m just an ally and I do research in this community.” I can hide it and come across as an ally in the South Asian community.

You have mentioned numerous times how difficult it can be for South Asians to explore their sexuality, find their identity, and be accepted. Where did you get your boldness and character from to be like, I know this is hard, but I have to do this?

I’ve been very into advocacy work from a young age from various clubs I’ve been at in school, but I think being in the LGBTQ+ advocacy scene is when I started noticing the very different way I was treated. I grew up in a very white town and the way my race was treated in the LGBTQ community was very much “you’re not white, therefore you’re not gay.” I also dated a racist my first year [of university] and it was when I realized this is not okay. When I was removed from that [situation], I started using my advocacy work and writing papers in my lesbian studies class. I was noticing there wasn’t research on South Asian queer women. I realized this problem exists because there isn’t representation. It is all very white ideologies, which isn’t conducive to us. My boldness came from a place of a lot of passion and not being able to find space in the queer community. The LGBTQ+ space is branded as “we’re a family that is welcoming to all, especially if your blood relatives leave you behind,” but then they are not letting in queer folks of color.

I didn’t want to pick between my South Asian and queer identity. It was a combination of so many shitty experiences and (knowing) somebody has to do the work. It is difficult because so many people in our community can’t do the work and that comes from not being able to be out due to the threat of family violence. And for me too, even though I also think about that threat, I’m also like, someone has to take one for the team. I’ll take one for the team. That’s been my approach.

That’s huge and so admirable. I think there are so many queer people who feel like they have rid themselves of their cultural background to be queer. You refusing to choose an identity is so useful for many types of people to see that you can, even if it’s hard, decide to live as both of these things, and if people don’t like it, fuck them.

Yes, that’s my pretty much my entire aesthetic. I am going to live as both of these things, and I am going to exist in these spaces, and you are going to accept it. I am so far beyond being controlled and told by white members of the queer community that you can’t be something because of your other identify.

Let’s talk about Queer South Asian Womxn’s (QSAW) network. Where do you see the network in the next 5-10 years?

Ideally get nonprofit status, which is difficult because it’s such a specific niche. It’s difficult enough to get funding for queer women’s things and then adding the layer of a racialized queer women’s organization. We want actual funds to do something more for the community and exist in physical spaces where we can provide proper resources.

Our three main goals for the QSAW network are one, community focus: engage and connect queer south Asian women. Two, advocacy in the broader LGBTQ+ community, three, wellness. We’d like to start arts and culture-based workshops to heal from the pain and violence that we consistently endure.

Those are awesome goals. Do you have resource recommendations?

A book that I really enjoy is by S. J. Sindu called Marriage of a Thousand Lies. It is about a marriage of convivence with queer individuals. it resonates with so many queer south Asian folks of who are looking at similar decisions to make between do we choose our queerness or our South Asian culture. I think it’s an important thing for people to learn about and understand.

Anything else you wanted to discuss today that we didn’t touch on?

Also, our spaces are for women and nonbinary folks and trans folks. This will not a cis-centered space. That is not what we tend to cultivate. We are trying our best to be inclusive of all south Asian identifies.

Connect with Patel on Instagram, connect with QSAW here, and make Marriage of a Thousand Lies your next book club book!

Tags: Alyy Patel , Queer South Asian Womxn's Network , South Asian , LGBTQ , queer
Support Feminist Media!
During these troubling political times, independent feminist media is more vital than ever. If our bold, uncensored reporting on women’s issues is important to you, please consider making a donation of $5, $25, $50, or whatever you can afford, to protect and sustain BUST.com.
Thanks so much—we can’t spell BUST without U.